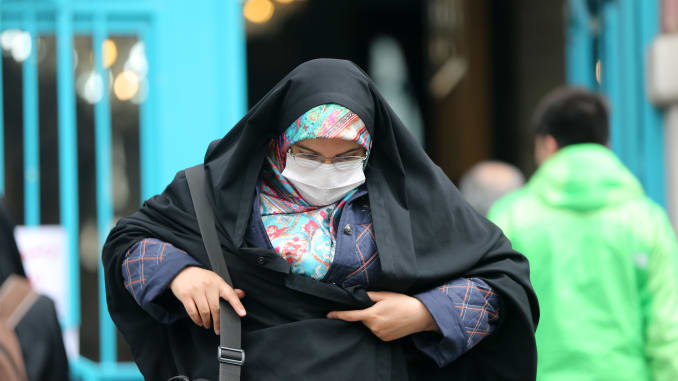 WHO warns coronavirus outbreak in Iran could be worse than is known. Experts still fear Iran may be underreporting its cases.
Share:

Iran’s death toll from the new coronavirus has increased to 1,812, with 127 new deaths in the past 24 hours, a health ministry spokesman told state TV on Monday, adding that the country’s total number of infected people has reached 23,049.

Kianush Jahanpur said that in the past 24 hours, some 1,411 Iranians had been infected with the virus across the Islamic Republic, which has the worst outbreak in the Middle East.

Iran’s supreme leader refused American assistance to fight the new coronavirus citing a conspiracy theory claiming it could be man-made by the United States government.

While Iranian officials in recent days have increasingly criticised those sanctions, 80-year-old Khamenei instead echoed Chinese officials about the possible origin of the coronavirus.

“I do not know how real this accusation is but when it exists, who in their right mind would trust you to bring them medication?” Khamenei said. “Possibly your medicine is a way to spread the virus more.”

He also alleged the virus “is specifically built for Iran using the genetic data of Iranians, which they have obtained through different means”.

“You might send people as doctors and therapists, maybe they would want to come here and see the effect of the poison they have produced in person,” Khamenei said.

Calling COVID-19 the “Wuhan virus”, Pompeo said Khamenei’s “fabrications are dangerous and they put Iranians and people around the world at greater risk”.

The statement also mentioned “failed” steps taken by Iran to counter the virus as “facts that Iran regime would like to keep from the world”.

The US secretary of state accused Iran of “putting millions of lives at risk and infecting its people with running 55 flights between Tehran and China in February, ignoring repeated warnings from its own health officials, and denying its first death from the coronavirus for at least nine days”.

“He works tirelessly to concoct conspiracy theories and prioritises ideology over the Iranian people,” Pompeo said of Ayatollah Khamenei.

There is no scientific proof offered anywhere in the world to support Khamenei’s claims.

However, his comments come after Chinese government spokesman Lijian Zhao tweeted earlier this month it “might be US army who brought the epidemic to Wuhan. Be transparent! Make public your data! US owe[s] us an explanation!”

Lijian likewise offered no evidence to support his claim, which saw the US State Department summon China’s ambassador to complain. A Chinese state newspaper tweeted on Sunday another allegation trying to link the virus to Italy, similarly hard-hit by the outbreak.

Wuhan is the Chinese city where the first cases of the disease were detected in December.

In recent days, the Trump administration has increasingly referred to the virus as the “Chinese” or “Wuhan” virus, while the World Health Organization (WHO) used the term COVID-19 to describe the illness the virus causes.

A US senator from Arkansas has trafficked in the conspiracy theory it was a man-made Chinese bioweapon. Relations with China and the US have been tense under President Donald Trump amid a trade war between the nations.

Ayatollah Khamenei continued to berate the United States on Sunday. “No one trusts you. You are capable of bringing into our country a drug that will keep the virus alive and prevent its eradication.”The American leaders are liars, manipulators, impudent and greedy… They are charlatans,” he said, also labelling them “absolutely ruthless”.

For most people, the new coronavirus causes only mild or moderate symptoms, such as fever and cough. For some, especially older adults and people with existing health problems, it can cause more severe illness, including pneumonia. The vast majority of people recover from the new virus.

Scientists have not yet determined exactly how the new coronavirus first infected people. Evidence suggests it originated in bats, which infected another animal that spread it to people at a market in Wuhan. The now-shuttered Huanan Seafood Wholesale Market advertised dozens of species such as giant salamanders, baby crocodiles and raccoon dogs that were often referred to as wildlife, even when they were farmed.

An article published last week in the peer-reviewed scientific journal Nature Medicine dismissed the idea the virus was man-made. Its authors said it was “improbable” that the virus “emerged through laboratory manipulation of a related SARS-CoV-like coronavirus”.

Khamenei made the comments in a speech in Tehran broadcast live on Sunday across Iran marking Nowruz, the Persian New Year, and the Islamic commemoration known as Isra and Miraj. He had called off his usual speech at Imam Reza shrine in Mashhad over the virus outbreak.

His comments come as Iran has reported more than 23,000 confirmed cases of the new coronavirus amid 1,812 reported deaths, according to government figures released Monday. Experts still fear Iran may be underreporting its cases.

Across the Middle East, Iran represents eight of 10 cases of the virus and those leaving the Islamic Republic have carried it to other countries.

Iranian officials have criticised US offers of aid during the virus crisis as being disingenuous.

They have accused the Trump administration of wanting to capitalise on its “maximum pressure” campaign against Tehran since withdrawing from the nuclear deal in May 2018.

US sanctions have made it more difficult for Iran to access the global market.

On Sunday, Pakistan’s Prime Minister Imran Khan echoed the call on the US to lift its sanctions.

“I want to appeal to President Trump on humanitarian grounds to lift the sanctions against Iran till the COVID-19 pandemic is over,” Khan said in a tweet.

“The people of Iran are facing untold suffering as sanctions are crippling Iran’s efforts to fight COVID-19. Humanity must unite to fight this pandemic,” he said.