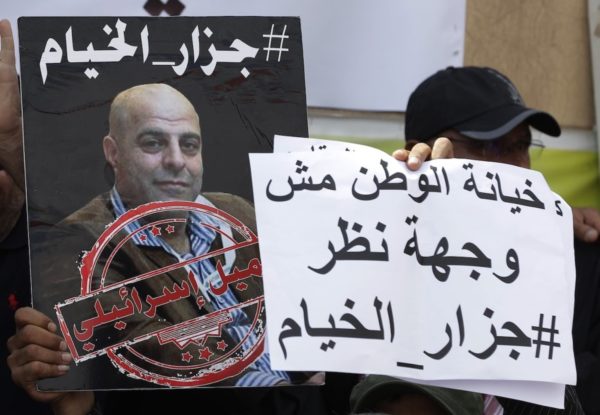 Members Amal movement and Hezbollah on September 15, 2019, hold a photograph of Amer al-Fakhoury, dring a demonstration in front of the former Israeli-run prison of Khiyam on the border with Israel, to demand his trial. [JOSEPH EID/AFP via Getty Images]
Share:

Abdallah said the move, which came following the release of Amer Fakhoury, was “out of respect for my oath and military honor,” and that he had informed the commander of the Army of his decision.

He also said he was resigning from a Military Tribunal where “the application of the law equals to the release of an agent of pain.”

Abdallah was referring to the acquittal Monday of Fakhoury, former head of an Israel-linked prison, of charges including murder and torture.

Fakhoury was taken to the U.S. from Lebanon Thursday, after which President Donald Trump thanked the Lebanese government for helping to facilitate Fakhoury’s return.

Foreign Minister Nassif Hitti “summoned” U.S. Ambassador to Lebanon Dorothy Shea in the morning, according to a statement from the Foreign Ministry. Hitti, the statement added, “listened to Shea over the circumstances behind transferring Fakhoury from the U.S. Embassy in Awkar to outside Lebanon.”

Several U.S. officials had complained about Fakhoury’s arrest in February and had threatened to ban visas and freeze the assets of Lebanese officials involved in his detention.

The tribunal’s March 16 decision which acquitted Fakhoury of his charges came six months after he was first arrested upon his arrival in Lebanon, and a month before his trial, which was set to be held on April 16.

Fakhoury was indicted in February and charged with torture, murder, attempted murder of inmates and kidnapping of thousands of Lebanese citizens in south Lebanon’s Khiam prison, a facility he oversaw between 1985 and 2000.

At least 10 people died at the prison during Fakhoury’s tenure at Khiam according to the reports .

The Military Tribunal dismissed the charges Monday,  citing the expiry of statute of limitations, a move that drew criticism from local media and politicians. Other Lebanese judicial authorities later ordered his travel ban and retrial, according to state media.

Fakhoury had been living in the United States since 2001, but was arrested in Sept. 2019 shortly after his return to Lebanon.

Hezbollah said in a statement after the acquittal that “it would have been more honorable and useful if the head of the military court and its members resigned instead of submitting to pressure that forced them to make this decision.”

“The crime of being an informant to the Israeli enemy cannot be forgotten. In heaven’s justice, the rights of the martyrs and former inmates do not fade ‘by the passage of time,’” Diab said.