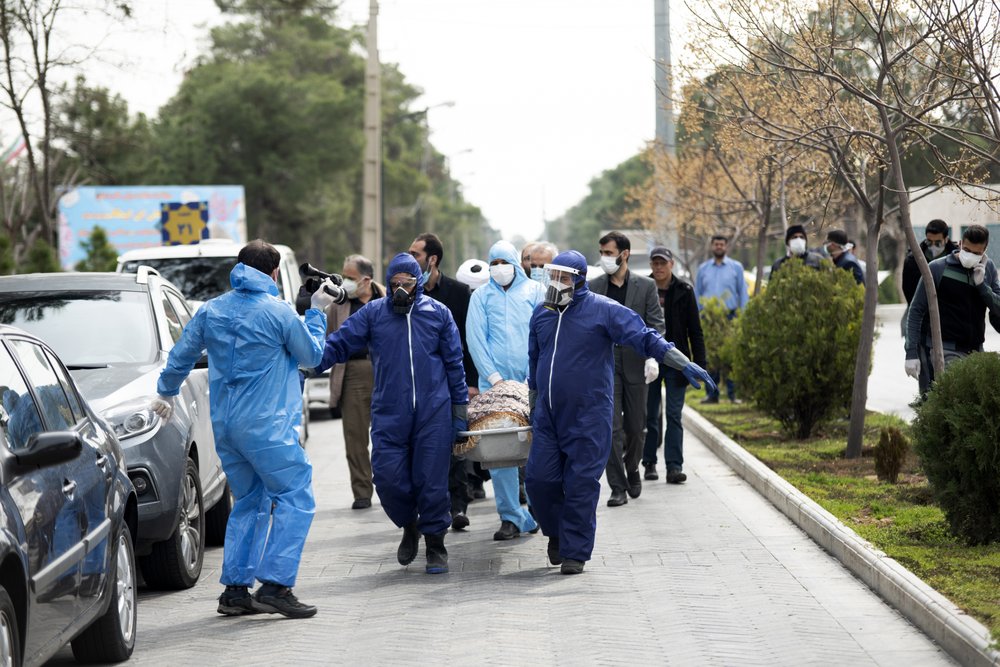 FILE— In this Sunday, March 8, 2020 file photo, men wearing protective gear carry the body of Fatemeh Rahbar, a lawmaker-elect from Tehran constituency, who died on Saturday after being infected with the new coronavirus, at Behesht-e-Zahra cemetery, just outside Tehran, Iran. Nine out of 10 cases of the virus in the Middle East come from the Islamic Republic. For most people, the new coronavirus causes only mild or moderate symptoms. For some it can cause more severe illness. (Mehdi Khanlari/Fars News Agency via AP, File)
Share:

By NASSER KARIMI and JON GAMBRELL

Iran issued its most dire warning yet Tuesday about the outbreak of the new coronavirus ravaging the country, suggesting “millions” could die in the Islamic Republic if the public keeps traveling and ignoring health guidance.

A state television journalist who also is a medical doctor gave the warning only hours after hard-line Shiite faithful the previous night pushed their way into the courtyards of two major shrines that had just been closed over fears of the virus.

Roughly nine out of 10 of the over 18,000 cases of the new virus confirmed across the Middle East come from Iran, where authorities denied for days the risk the outbreak posed. Officials have now implemented new checks for people trying to leave major cities ahead of Nowruz, the Persian New Year, on Friday, but have hesitated to quarantine the areas.

That’s even as the death toll in Iran saw another 13% increase Tuesday. Health Ministry spokesman Kianoush Jahanpour said the virus had killed 135 more people to raise the total to 988 amid over 16,000 cases. Jordan meanwhile prepared for a shutdown of its own over the virus, banning gatherings drawing more than 10 people.

Most people infected by the new coronavirus experience only mild or moderate symptoms, such as fever and cough, and recover within weeks. But the virus is highly contagious and can be spread by people with no visible symptoms. For some, especially older adults and people with existing health problems, it can cause more severe illness, including pneumonia.

The Iranian state TV journalist, Dr. Afruz Eslami, cited a study by Tehran’s prestigious Sharif University of Technology, which offered three scenarios. If people begin to cooperate now, Iran will see 120,000 infections and 12,000 deaths before the outbreak is over, she said. If they offer medium cooperation, there will be 300,000 cases and 110,000 deaths, she said.

But if people fail to follow any guidance, it could collapse Iran’s already-strained medical system, Eslami said. If the “medical facilities are not sufficient, there will be 4 million cases, and 3.5 million people will die,” she said.

Eslami did not elaborate on what metrics the study used, but even reporting it on Iran’s tightly controlled state television represented a major change for a country whose officials had for days denied the severity of the crisis.

Earlier on Monday, the state TV had announced the shrines’ closure, sparking the demonstrations.

Police later dispersed the crowds, state media reported. Religious authorities and a prominent Qom seminary called the demonstration an “insult” to the shrine in a statement, urging the faithful to rely on “wisdom and patience” amid the closure.

Iran’s shrines draw Shiites from all over the Mideast for pilgrimages, likely contributing to the spread of the virus across the region. Saudi Arabia earlier closed off Islam’s holiest sites over fear of the virus spreading.

President Hassan Rouhani on Tuesday said despite the closures, “our soul is closer to the saints more than at any time.”

State TV reported that Iran had deployed teams to screen travelers leaving major cities in 13 provinces, including the capital, Tehran. But Iran has 31 provinces and authorities haven’t taken the step to lock down the country like in the allied nations of Iraq and Lebanon.

The teams check travelers’ temperatures and will send those with fevers to quarantine centers. Iran has been urging people to stay home, but many have ignored the call.

Apparently in efforts to curb the spread of the virus, Iran has released 85,000 prisoners on temporary leave, judiciary spokesman Gholamhossein Esmaili said Tuesday. He said that included half of all “security-related” prisoners, without elaborating. Western nations have called on Iran to release dual nationals and others held allegedly as bargaining chips in negotiations.

Among those released is Mohammad Hossein Karroubi, the son of opposition leader Mehdi Karroubi, who was in jail for nearly two months.

The kingdom of Jordan deployed troops outside of major cities to block travel on Tuesday. It also ordered newspapers to cease publishing, banned gatherings of more than 10 people and established a quarantine zone at Dead Sea hotels. It halted all private sector work and public transportation as well.

In Oman, the sultanate announced anyone coming from abroad would be subject to quarantine. It also lifted restrictions on voice-over-IP internet calling services, which are common across Gulf Arab nations.

Meanwhile in Israel, the Defense Ministry was to roll out its plan to use near-empty hotel facilities, ravaged by the crash in tourism, as recovery centers for patients diagnosed with COVID-19, the illness caused by the virus.

Two hotels are to begin receiving patients on Tuesday with others likely to follow. The facilities are to be overseen by medical officials with patients quarantined in rooms, and food and other amenities delivered to the rooms by protected hotel staff.

Israel’s Defense Minister Naftali Bennett issued orders Tuesday to allow into Israel only those Palestinian workers and merchants whose work is deemed essential in health, agriculture, nursing and construction. Workers allowed in will stay in Israel for between one and two months.

Also, following an overnight Cabinet approval, Israel’s internal Shin Bet security service said it will begin deploying its phone-tracking technology to combat the spread of the virus. The Shin Bet insisted the use will be limited only to help “save lives” and warn those who have been exposed. Amid secrecy concerns, it said the technology won’t be used to enforce quarantines and the data will only be stored temporarily and available to just a select group of agents. The emergency ordinance will be effective for 30 days.