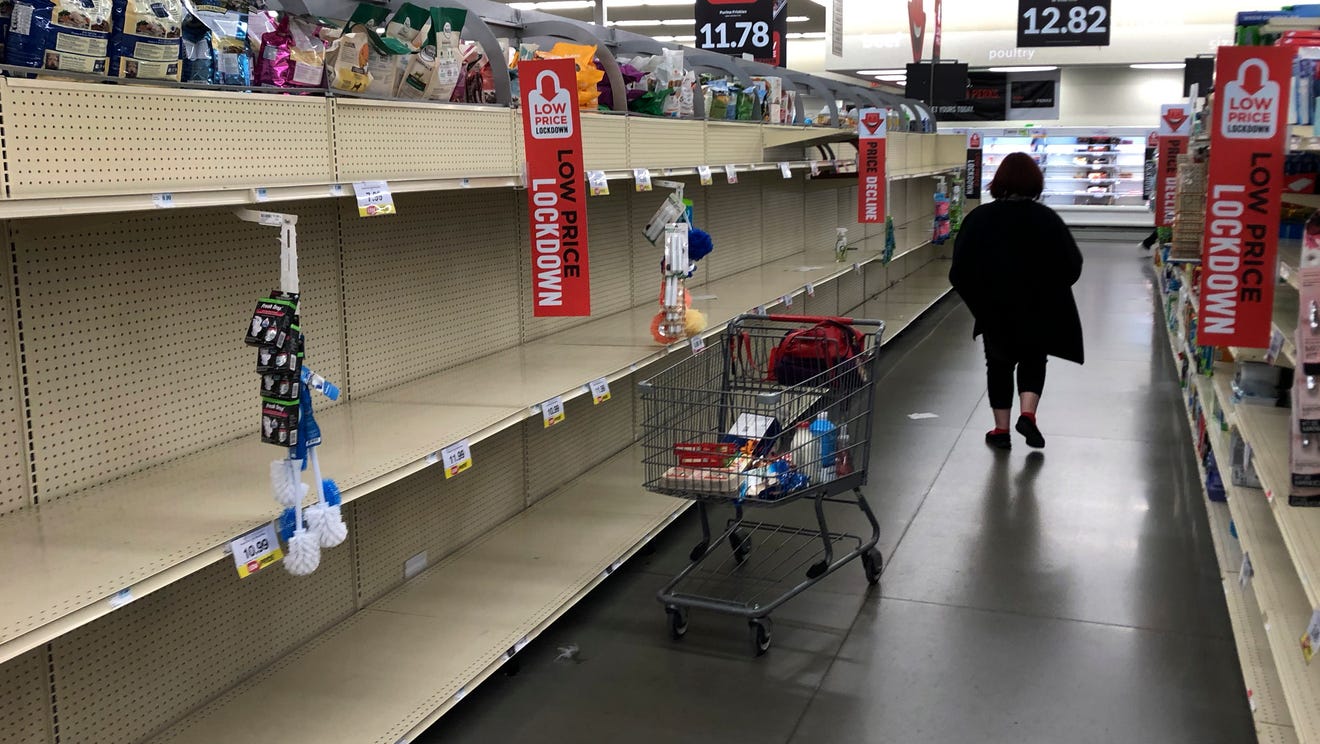 Chiquita Thursby and Yordano Tesfailasce couldn’t believe what they saw when they arrived at Costco Friday morning.

“We saw the line around the block and we thought the world had gone mad,” Thursby said of the crowd gathered outside the store in Lawndale, California.

They had to wait an hour for two cases of bottled water, the most water they were allowed to buy. And paper towels and toilet tissue were sold out. Suddenly, the crowds, the empty shelves, the rationing made the coronavirus much more than headlines.

At stores across the U.S., shelves are being picked bare. The coronavirus is spurring panicked shoppers to stock up on products ranging from cleansing wipes to peanut butter as they prepare to hunker down in the midst of the growing pandemic.

“They’re acting like this is the end of the world,” said Lynette Young, a nurse in Los Angeles, who was amused by the rush as she bought ginger ale and cleaning supplies at a local Walmart. “If they regularly stocked up, they wouldn’t have this problem.”

Restaurants and COVID-19:Dine out or eat in during the coronavirus crisis? Here’s what public health and food safety experts say

Health officials have asked people to maintain a safe distance from each other to slow the spread of COVID-19, which has caused the deaths of 41 Americans and led President Donald Trump to declare a national emergency Friday afternoon.

But shoppers are apparently willing to brave a crowd if it means immediately getting  their hands on necessities, instead of waiting for an online order.

So many people showed up at Woodman’s Food Market in Waukesha, Wisconsin, on Thursday afternoon, that the normally 24-hour grocery store shut its doors before midnight. It planned to shut down again, at 10:30 pm. Friday, so the staff could restock the shelves.

Steve Haze, the store’s manager, said the store saw a 50% increase in its normal volume of business, a spike he’d rarely seen during his 21 years working at Woodman’s.

“Y2K. That was about it,” Haze said of the frenzied shopping that occurred when some people feared systems would go awry at the dawn of the new century. Now, the store is having to restrict the number of paper products and bottled water customers can buy. “We are the only one left in Waukesha with toilet paper, so that’s why everybody is here.”

At the Costco in Lawndale, roughly 200 people waited in a line that stretched three blocks.

“I’ve never seen anything like it,” says Christine Chan of Los Angeles. “I’ve never had to wait in a line to get into Costco.”

Shoppers at a Walmart in Gardena, California, were greeted by a notice saying they couldn’t buy more than two packages of toilet paper, hand sanitizer or cleaning wipes, only to discover that by 9:30 am, they were already too late.

Bottled water sold out in 15 minutes. And by mid-morning the store looked like a deserted warehouse, with no paper towels, no toilet paper and no soap. Rice and beans were also hard to find.

Meanwhile, customers at a Target in Manhattan Beach, California were having trouble getting their hands on a shopping cart. And in Red Bank, New Jersey, thirty people were lined up outside Lou Scaduto Jr.’s Super Foodtown grocery before it even opened.

“It is like pandemonium,” said Scaduto, president and CEO of Food Circus Super Markets, which owns five Super Foodtown locations. “They are literally buying everything. … I have never seen so much toilet paper go off the shelf.”

But are things really that bad?

Retailers have acknowledged that they are struggling to keep up with the demand for certain products like disinfectant and paper towels. And hand sanitizer, which people need to keep replenishing because they’re likely using more of it than usual, may remain difficult for shoppers to come by.

“Hand sanitizer is going to be very difficult to have 100% in stock … for some time,” Doug McMillon, CEO of Walmart, said during a Friday news conference in which President Trump announced measures to deal with the coronavirus outbreak. “We’re still replenishing it and shipping it, but as soon as it hits the stores, it’s going.”

Some retailers are steering items to locations with the worst shortages, and even limiting purchases to make sure there’s enough to go around.

“The panic is largely unnecessary because most retailers are able to replenish products fairly quickly,” says Neil Saunders, managing director of the retail consultancy Global Data. “Also, products like toilet paper are not being used more than usual so people who have already stocked up will not keep buying them.”

Costco’s CFO Richard Galanti said in an earnings calls with investors last week that stores are “getting deliveries daily, but still not enough given the increased levels in demand on certain key items … I would assume that over the next few weeks or several weeks that’ll abate. But it depends what else happens with the virus.”

Putting a limit to hoarding

In the meantime, Costco and other retailers have begun to limit the amounts shoppers can buy of certain products.

Wegmans customers can’t purchase more than four one-gallon containers of water, and no more than three containers of items like rubbing alcohol and hydrogen peroxide. Additionally, shoppers can purchase a maximum of two containers of disinfecting wipes, and only a single family pack of toilet tissue.

“We continue to receive shipments of these products and are sending them out to stores as soon as they arrive,” the grocery chain said in a statement.

Target is limiting toilet paper, various forms of wipes and hand sanitizer to one per customer. And no one can buy more than two 24-bottle packs of water.

Kroger began limiting the amount of cold, flu and sanitary products that could be purchased in a particular order on March 2. “We believe that everyone deserves to have access to fresh, affordable food and essentials, especially in times of uncertainty,” Kroger CEO Rodney McMullen said in a statement to customers.

Walmart has also given its store managers the “go ahead” to limit how many items a customer can buy, if the product is in particular demand. It’s also bypassing warehouses in some cases, getting goods right to stores, and focusing on particular regions where shortages are most acute.

Southeastern Grocers, parent company of Winn-Dixie, BI-LO, Harveys and Fresco y Más grocery stores, is updating “stocking plans throughout each day to ensure … that the products our customers need are on the shelf,” Joe Caldwell, the company’s spokesman said in a statement to USA TODAY. Its stores are limiting customers to two items each in categories like first aid and household cleaning products.

And ALDI, which says it’s focusing on keeping pre-made meals, pantry staples, water and cleaning supplies in stock, says its customers might also see purchase limits and added that “some of these products may be temporarily unavailable in some of our stores.”

Shoppers may have to visit several stores

Some shoppers are having to make several stops to find what they need, or a store where they can simply get in the door.

Moses Elkaim stopped by a ShopRite in Union, New Jersey, Thursday evening only to be told by security that he would have to wait at least 30 minutes before he could enter the overcrowded store.

He left. But a nearby Walmart was also not an option. It was so full, Elkaim said, that he saw cars parked in spots he’d never seen filled at that time of night.

Eventually, he was able to pick up vegetables, eggs and other groceries at a store closer to his home in New York City. And after encountering some empty shelves elsewhere, he was finally able to buy toilet paper at a Lidl store he passes on his way to work.

“I’ve seen reactions when it’s raining or snowing,” says Elkaim, a print production manager. “This is something really different. People were very civil but you could tell by the seriousness in their faces that this is something else … Everybody was on a mission. They were not looking to come home empty handed.”

But some felt concerns about shortages and a shopping surge were overblown.

Rick Sloan, who was making his usual trip to Costco in Spartanburg, South Carolina, said lines were long, but he was still able to get in and out relatively quickly. He also had no problem finding bottled water and tissues, and said he didn’t feel the need to stockpile items.

“I think it’s kind of ridiculous,” Sloan said, “and I think the media is responsible for it.”

Walmart, the world’s largest retailer, said it might trim hours at 24-hour locations to give the company more time to clean stores.

“We are evaluating whether to modify store hours at some 24-hour facilities to allow for additional cleaning,” Walmart said in a statement.

All Wegmans locations will close overnight to allow the stores to be cleaned and items to restocked, the New York-based supermarket chain announced Friday, saying the temporary change was in response to high demand.

Florida-based Publix also is changing hours starting Saturday at its 1,200-plus stores, it announced in a tweet . The grocery store chain “will adjust store and pharmacy hours companywide to close at 8 p.m. until further notice” to both clean and restock stores. Stores usually close at 10  or 11 p.m. depending on the location.

Starting Sunday, Harris Teeter will close stores at 9 p.m. each night until further notice, the grocery chain posted on its website. Stores will open at their regular scheduled time, the company said.

To better serve our customers, give our store teams time to conduct additional preventive sanitation and restock product on our shelves, beginning Saturday, March 14 we will adjust store and pharmacy hours companywide to close at 8 p.m. until further notice. pic.twitter.com/Lc0jRLtZwh