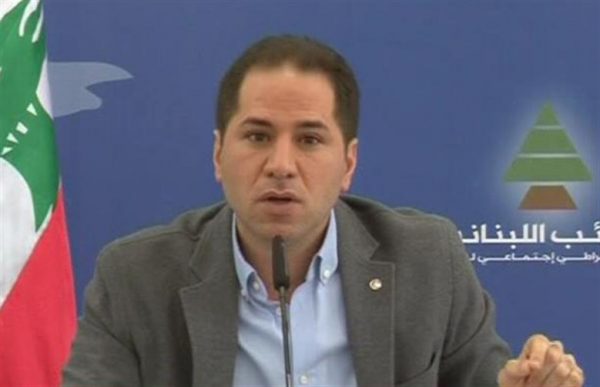 Head of the Kataeb party MP Sami Gemayel described on Tuesday an attack on his party headquarters in Beirut’s Saifi district as “pitiful.”

In a press conference, Gemayel lashed out at Hezbollah, holding it responsible for Lebanon’s economic and social crises.

“Nothing will change our position …We will remain here as a platform from where the party will continue to speak the truth,” Gemayel said in reference to the shooting at the Kateb party building.

The MP expressed surprise that the attack happened at a short distance from a Lebanese Army base.

Assailants in an unidentified car shot at the party headquarters at dawn Sunday, without causing any damage or casualties.

“There is a responsibility lying on Hezbollah, which led the country to isolation, preventing the flow of investments and tourists to Lebanon,” he said.

The Kataeb leader said Hezbollah is considered the main obstacle for reforms in the country.

Gemayel listed three parties responsible for the current economic crisis in the country.

According to him, they are the ruling elite that wasted people’s money and mismanaged the country, and banks that allowed the state to borrow without placing any conditions on it, out of their objective for profits from the high interest rates.

The third side is Hezbollah, which turned the entire country into an isolated zone, causing an economic crisis over its involvement in regional wars, the lawmaker said.