Outgoing US ambassador to Lebanon tells Aoun the protesters are right 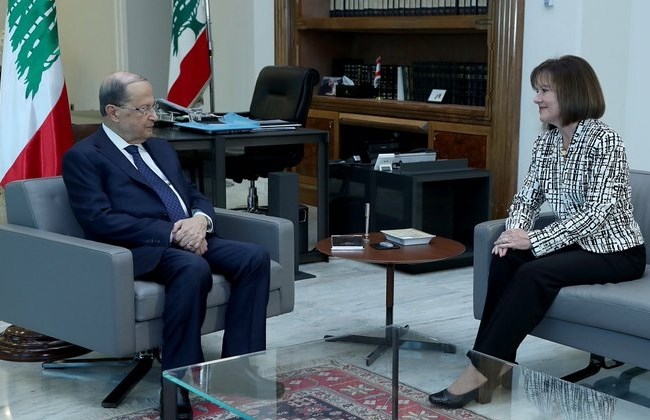 “In October, citizens of all sects and geographic regions took to the streets to demand better from their government, and they are right,” she said, after her farewell meeting with President Michel Aoun at the Baabda Palace.

Richard said there is no reason that Lebanon, a country blessed with many gifts, “does not have in 2020 a modern waste management system, 24/7 electricity for everyone, a single armed force under the control of the state and a growing economy.”

The U.S. Senate confirmed Dorothy Shea as Washington’s Ambassador Extraordinary and Plenipotentiary of the United States of America to the Lebanese Republic on February 11, who will be replacing Richard at the U.S. Embassy in Beirut.

Shea, a strong supporter of president Donald Trump is a career member of the Senior Foreign Service, class of Minister-Counselor whose most recent position was the Deputy Chief of Mission of the United States Embassy in Cairo, Egypt. Previously, she had served as Deputy Principal Officer at the United States Consulate General in Jerusalem, as Director of the Office of Assistance for Asia and the Near East in the Bureau of Population, Refugees, and Migration, and as a Pearson Fellow with the Senate Foreign Relations Committee. Shea was also the Political/Economic Counselor at the United States Embassy in Tunis, Tunisia, a Political Officer at the United States Embassy in Tel Aviv, Israel, a Director for Democracy and Human Rights at the National Security Council, and a Special Assistant to the Special Envoy for War Crimes Issues in the Department of State. Shea earned a B.A. from the University of Virginia, M.S. from Georgetown University, and M.S. from the National War College. She speaks French and Arabic.