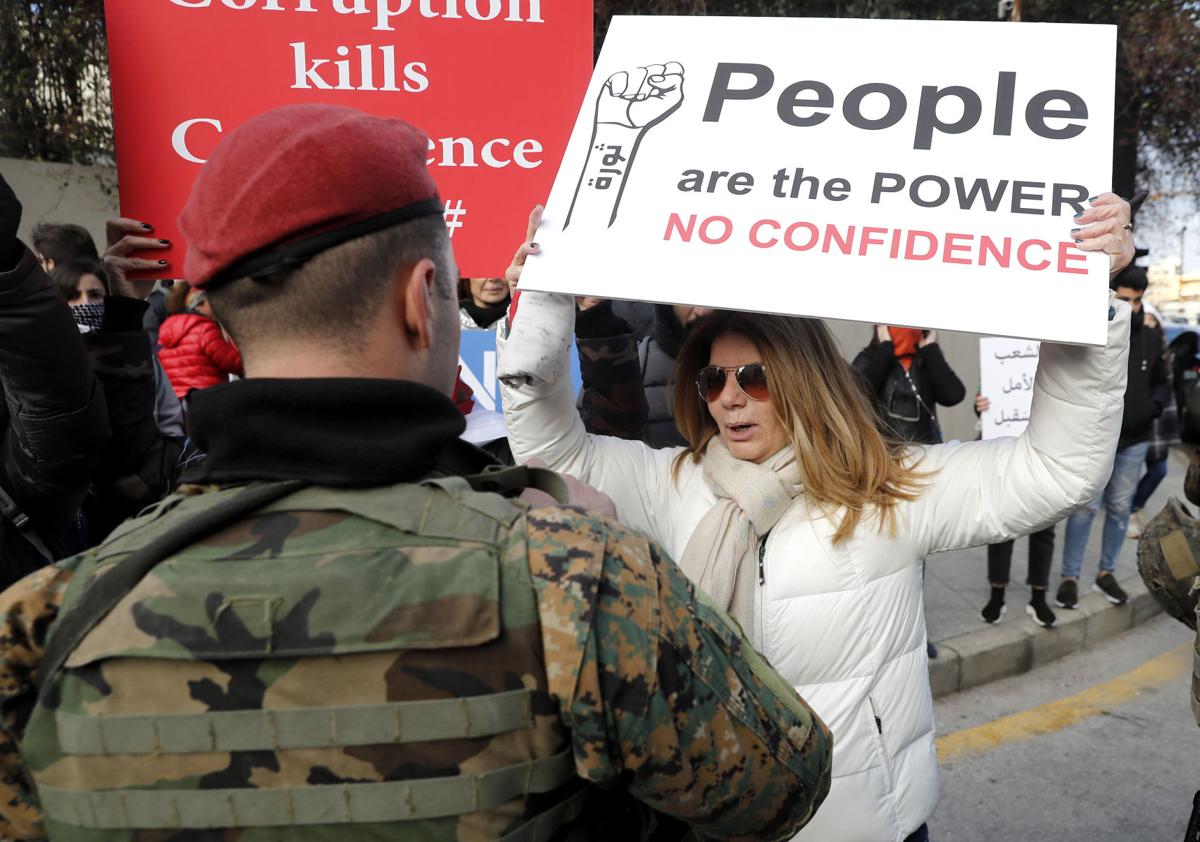 A protester in downtown Beirut is protesting against Tuesdays parliament meeting to grant the vote of confidence to the cabinet off Hassan Diab . The International Support Group for Lebanon Wednesday called on Diab to swiftly take comprehensive and credible reforms to stop the deteriorating conditions and meet the people’s demands
Share:

After four months of widespread protests, Lebanon has a new government. Voted in by a slight majority in parliament in late January, it must deal with the gargantuan task of an economic meltdown of historic proportions, and of assuaging countrywide protesters questioning the legitimacy of the entrenched political elite. Lebanon’s economy, and with it perhaps its long-term political fortunes, are at stake.

Since October, protesters across Lebanon, disillusioned with the gross political and economic mismanagement of successive governments, have demanded sweeping reforms. They have put the blame squarely on elites who draw their influence from Lebanon’s dysfunctional power-sharing system. This confessional model, which distributes the country’s top political seats based on sectarian identity, has weakened state institutions; enabled a culture of clientelism, corruption and rent-seeking; and hindered effective and rational policymaking. Instead of the public good or public commons, there are only the private interests needed to maintain the system, even if they bankrupt the country.

According to a 2016 World Bank report, patronage politics cost Lebanon an estimated 9 percent of GDP annually, in part because the country rarely punished corruption among elites. Meanwhile, inequality has exploded, with the richest 1 percent of Lebanese earning 25 percent of Lebanon’s national income.

The result has been catastrophic: a triple crisis that includes a banking and currency crisis, a balance of payments crisis and a fiscal crisis. Facing a debt-to-GDP ratio of around 160 percent, the technocrats in the new government will need to bring government expenditures under control at a time when its revenues have decreased dramatically. Lebanon’s banking sector is also experiencing a run as people desperately seek to withdraw their hard-earned deposits. With at least a third of their assets invested in precarious private sector loans and another half with the Central Bank, most Lebanese banks are today illiquid, and some may be insolvent. They have ceased most normal banking functions and are more akin to “zombie banks.” The Central Bank, which normally would have stepped in to provide the needed liquidity, is itself constrained by a limited supply of U.S. dollars and its unusual policy of paying for government liabilities. Should it compensate by printing more Lebanese liras, it may lead to further currency depreciation and possibly hyperinflation.

More and more businesses are shutting down, and around 220,000 Lebanese are estimated to have lost their jobs since the protests began. Lebanon will most likely face a double-digit recession this year, while the currency has already lost 40 percent of its value with no end in sight. According to conservative estimates, Lebanon needs a bailout of at least $20 billion to $25 billion to weather this crisis.

The social consequences of this economic crisis are also debilitating. In addition to rampant inequality, a third of the population was already living below the poverty line before the current crisis. In November, the World Bank warned that the poverty rate could rise to nearly half the population if the currency depreciated by 40 percent—which it has since then. The World Bank also estimates that among the 1.5 million Lebanese in poverty, roughly half will face extreme poverty, unable to provide even the basic calories needed per day for their families.

Areas of the country already suffering from considerable poverty before this crisis are being hit especially hard. In Tripoli, dubbed the “bride of the revolution” because it has been a center of anti-government protests, around 50 percent of the population lives on less than $4 a day. In Nabatieh in southern Lebanon, another hub of protests, around 25 percent of people are considered poor. With weak state institutions and little fiscal capacity, public services are sputtering. Hospitals, for example, are starting to experience shortages of medicine.

When the demonstrations began last fall, they seemed to be heralding a moment of profound transformation. Their decentralized and nonsectarian nature immediately distinguished them from past protest movements in Lebanon. As popular revolts against communal leaders and their political parties, they captured an expanding sense of national solidarity and the recognition that the old sectarian formulations are fading. The protests instead are about a corrupt political class versus the rest of the country.

Socially, this moment is also one of change. Women have been at the forefront of the demonstrations, seeking to upturn patriarchal norms that discriminate against them, including denying them the right to pass on their citizenship to their children if the father is not Lebanese. Lebanon’s youth and those who inhabit Lebanon’s political, economic and geographic peripheries have also led the charge, seeking an end to clientelist systems and more equitable opportunities to achieve their potential.

Yet after four months of protests and economic freefall, Lebanon’s political class is still focused on preserving their privileges in a system that is no longer operational. Their approach so far has been to continue their backroom horse-trading even as the country sinks further economically. They have just paid lip service to popular demands for a skilled government of independent candidates. The new prime minister, Hassan Diab, and his government are perceived as political partisans appointed by the parties who elected them in this polarized context. Diab served as minister of education in a previous government. His administration does not have the widespread political support needed to implement the painful economic measures Lebanon desperately needs, nor does it have the buy-in of the streets.

Continuing on this path will be catastrophic for Lebanon and for the Lebanese. The new government needs to put in place a credible economic emergency rescue plan that seeks external budgetary support and outlines effective reforms to curb corruption, improve governance and ensure equitable development as a precondition for extending the necessary financial support. It should also launch a wide-ranging political dialogue that acknowledges the seismic political shifts taking place in the country and addresses the key governance challenges. It should also call for early parliamentary elections based on a new electoral law that ensures a more equitable playing field as demanded by protesters. Without charting this parallel economic and political path, Lebanon may face many lost decades ahead.

Maha Yahya is director of the Carnegie Middle East Center, where her work focuses broadly on political violence and identity politics, pluralism, development and social justice after the Arab uprisings.