Iran has lowest voter turnout since 1979,”very embarrassing” for its leaders 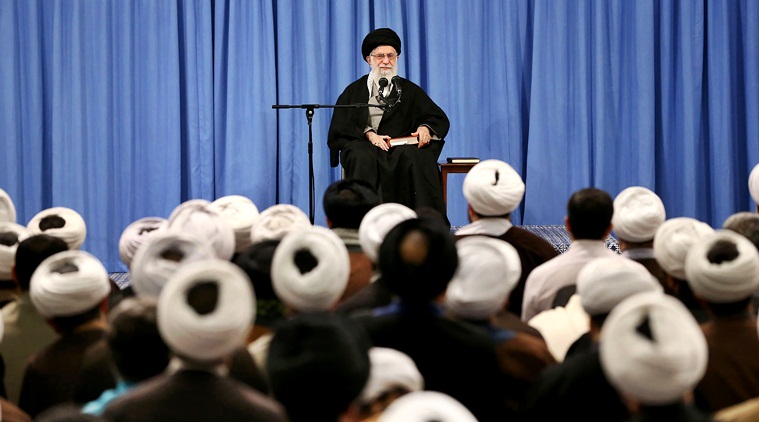 In this photo released by an official website of the office of the Iranian supreme leader, Supreme Leader Ayatollah Ali Khamenei speaks in a meeting in Tehran, Iran, Sunday, Feb. 23, 2020. Officials in Iran haven’t announced the full results from parliamentary elections two days ago, but on Sunday the country’s supreme leader accused enemy “propaganda” of trying to disuade people from voting by amplifying the threat of the coronavirus. (Office of the Iranian Supreme Leader via AP)
Share:

Iran’s interior minister has announced that the voter turnout in the recent parliamentary elections was about 42 percent, the lowest since the 1979 revolution.

It was the first time turnout dipped below the 50 percent mark since the revolution as the country’s top leader said its enemies played up the threat of the new coronavirus to dissuade people from voting.

“The turnout across the country was 42.57 percent,” Interior Minister Abdolreza Rahmani Fazli told a televised news conference on Sunday. “In [the capital] Tehran, it was around 25 percent. Across Iran, over 24 million people voted.”

Fazli said the election took place under less-than-ideal circumstances, but nevertheless, “we believe that the number of votes and the turnout is absolutely acceptable”.

In the 2016 polls, the turnout was 62 percent, while four years earlier, it was 66 percent. The 2020 figure will be a disappointment for the country’s political leadership, which had called for a turnout of at least 55 to 60 percent in the run-up to the elections.

“We knew this election would be controversial because the Guardian Council, the body that vets candidates, disqualified thousands of candidates, including 81 current sitting MPs,” he said.

“But despite the Supreme Leader and President Hassan Rouhani coming out to encourage people to vote, they just didn’t come out.”

Iran’s Supreme Leader Ayatollah Ali Khamenei, who on Friday said voting was “a religious duty”, blamed the low turnout on the “negative propaganda” about the new coronavirus.

“This negative propaganda about the virus began a couple of months ago and grew larger ahead of the election,” said Khamenei, according to his official website.

“Their media did not miss the tiniest opportunity for dissuading Iranian voters and resorting to the excuse of disease and the virus.”

Iran, which confirmed its first case of the new coronavirus two days before the polls, has announced 43 cases of the virus in four different cities, including in Tehran.

With eight people dead, Iran has the highest death toll from the new coronavirus outside of China, where the outbreak started late last year and has so far killed more than 2,400 people.