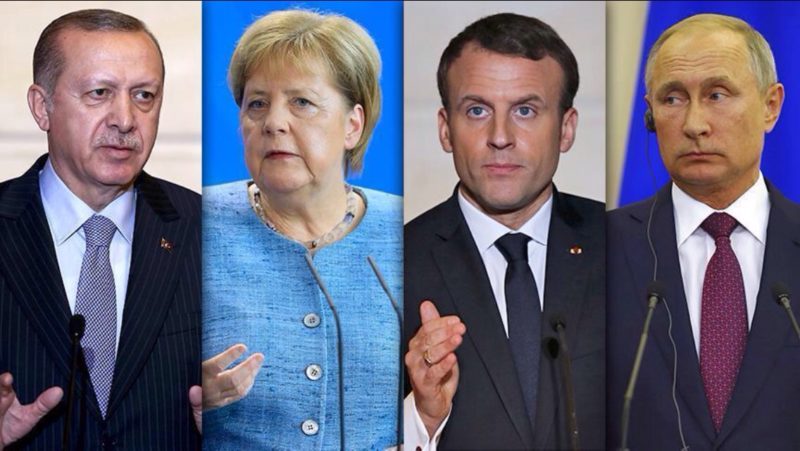 In their phone call with President Putin, Merkel and Macron expressed their “concern over the humanitarian catastrophe for residents of Syria‘s Idlib province”, Merkel’s office said.

A months-long offensive by Russia-backed Syrian troops against rebels backed by Turkey in northwest Idlib has seen close to 1 million civilians flee the violence.

The two European Union leaders “expressed their willingness to meet President Putin and Turkish President Erdogan to find a political solution to the crisis”, the chancellor’s office said.

Merkel and Macron “called for an immediate end to the fighting and unfettered humanitarian access to people in need”, their statement said.

Since Syria’s civil war erupted in 2011, the country has never seen so many people displaced in so short a time.

In nine years, millions of civilians have fled their homes and more than 380,000 have been killed.

Russia on Wednesday objected to the UN Security Council adopting a statement that would have called for a ceasefire in Idlib, diplomats said, after a tense closed-door meeting.

The UN urged neighbouring Turkey to admit the new displaced people but Ankara is resisting as it already has some 3.7 million Syrians on its territory.

For its part, Turkey said Thursday it wanted no “face-off” with Moscow over Syria’s offensive near the two countries’ border but said it might receive US defence missiles to protect Turkish forces.

Tensions have mounted in the last three months between rebel-backer Turkey and Syria ally Moscow over President Bashar al-Assad’s offensive in northwest Idlib, the last-rebel held region in Syria.

Earlier this month, 14 Turks were killed in two separate incidents of regime shelling in Idlib. Two more were killed on Thursday.

“We have no intentions of a face-off with Russia,” Turkey’s Defence Minister Hulusi Akar told CNN Turk broadcaster, adding talks would continue with Russian officials.

One of the issues being discussed is the airspace above Idlib and Turkey’s expectations for Russia not to get involved, Akar said.

There has been no concrete agreement between Russia and Turkey after two rounds of talks between their respective delegations in Ankara and Moscow earlier this month.

Turkey has 12 observation posts in Idlib province, set up after a deal signed with Russia in the Black Sea resort of Sochi in 2018 to prevent a regime offensive.

“There is the threat of air strikes, missiles against our country,” Akar told CNN Turk channel, adding: “There could be Patriot support.”

He was referring to the US-made anti-missile missiles.

Akar ruled out any US troop support in the interview filmed earlier on Thursday before two Turkish soldiers were killed in Idlib in an air strike blamed on Damascus.

Any delivery of US Patriots would be difficult since Ankara purchased the S-400 Russian air defence system despite Washington’s objections and concerns.

Despite this and the remaining threat of US sanctions against Turkey over the purchase, Akar said the system “would be activated … No one should doubt this.”

The minister said Turkey still sought to purchase the Patriots, an equivalent of S-400s, despite the US concern over the S-400 system.

He also again criticised the US over its move last year to kick Turkey off its F-35 fighter jet programme as punishment for the S-400 purchase. “We are a partner in the programme, not a customer,” he added.

Turkey has warned Damascus of an “imminent” operation if regime forces do not move back behind Ankara’s military posts in Idlib.