Hezbollah’s Nasrallah mocked over calls to boycott US goods 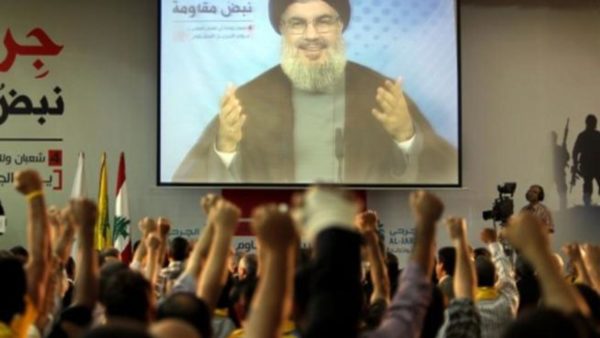 Lebanese people have flocked to social media to mock Hezbollah leader, Hassan Nasrallah, after he called for a boycott of US goods and products in a speech on Sunday.

Calling the boycott “part of the battle” against US President Donald Trump’s Middle East plan, Nasrallah added, “if we do not want to boycott all goods, we choose some companies, and this is a form of confrontation”.

Pro-Hezbollah social media accounts later published lists of US products under the title “economic boycott is alertness and jihad”.

Pro-Hezbollah social media publishes lists of US products under title “Economic boycott is alertness and jihad” after leader Nasrallah calls on supporters to avoid US goods. Not sure how Lebanese will take to suggestion that they further narrow shopping choices, as prices rise. pic.twitter.com/gjNeYJ3Kc8

One Twitter user Dalia Tarabay a Lebanese activist, shared a picture of Nasrallah’s son, Jawad, sporting a branded American jumper, with the caption “I’m not taking off my Timberland USA hoodie, dad”.

Hassan Nasrallah: “I call on the Lebanese to boycott American products.”
His son, Jawad Nasrallah: I’m not taking off my Timberland USA hoodie, dad. 🙄👇#لبنان_ينتفض pic.twitter.com/sD1LMnogx6

The Jerusalem Post reported that Jawad responded saying “all those who wrote against me – I don’t attack back. I don’t buy American products, even my iPhone I plan to sell”.

Tarabay added: “I wonder what Jawad will do with his American degree obtained from [the American University of Beirut].”

Twitter user Cynthia Karam wrote: “If I see any Hezbollah member carrying an iPhone, I will complain about him to Nasrallah”.

Hassan Jaroudi, a Lebanese Swiss healthcare professional, suggested Nasrallah should call for a boycott on American social media companies, and instead use Chinese alternatives.

This shows how dangerously delusional #Iran and its militias are. Here, Hezbollah's Nasrallah calls on #Lebanon to boycott US products. He doesn't understand that an economy in free fall, like #Lebanon, cannot exert boycott/economic pressure on anyone, let alone America. pic.twitter.com/RZlkj93fej

Nasrallah has recently faced criticism after a statue of Qassem Soleimani, who was assassinated by US forces on 2 January, which was unveiled at the Israel-Lebanon border, allegedly turned out to be made of cardboard.

Cardboard statue of terrorist Soleimani pointing to Israel. Is this a real threat? I doubt it! 🤔😳 https://t.co/RuEA5QZVJd