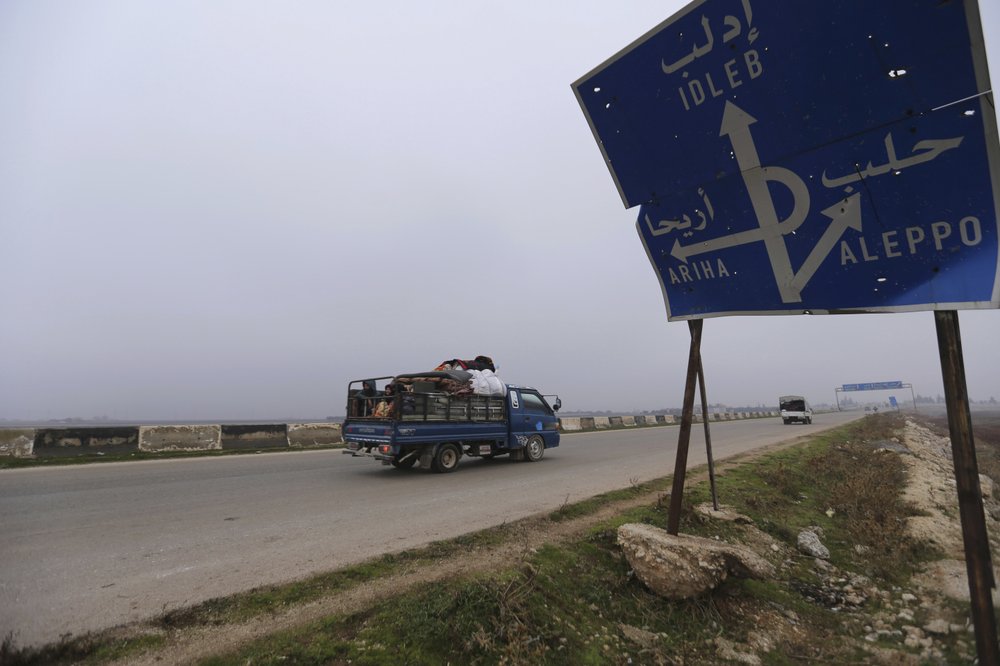 BEIRUT (AP) — It is arguably one of the most coveted prizes in Syria’s civil war, and after eight years of fighting, Syrian President Bashar Assad has got it back.

The Damascus-Aleppo highway, or the M5, is known to Syrians simply as the “International Road.” Cutting through Syria’s major cities, the motorway is key to who controls the country.

Assad gradually lost control over the M5 from 2012, when various rebel groups fighting to topple him began seizing parts of the country.

Protests against his family’s rule had erupted the year before amid a wave of uprisings in the Arab world. This soon turned into a civil war, following a brutal government crackdown on dissent and the intervention of foreign powers in the growing conflict.

Historically a bustling trade route, one Syrian analyst, Taleb Ibrahim, called the M5 “the most basic and strategic highway in the Middle East.”

For the Turkey-backed rebels fighting Assad, the highway was a cornerstone in holding together their territory and keeping government forces at bay. Its loss marks a mortal blow for opposition fighters whose hold on their last patches of ground in northwestern Syria is looking more and more precarious.

Here’s a look at the M5, and its place in Syria’s nearly nine-year-long civil war:

The M5 is a strategic highway that starts in southern Syria, near the border with Jordan, and runs all the way north to the city of Aleppo near the Turkish border.

Before the war, the M5 motorway served as an economic artery for Syria — mainly feeding the country’s industrial hub of Aleppo. Experts estimate the road carried business worth $25 million a day at the height of Syria’s trade boom before the war.

The highway was a passageway for the crossing of wheat and cotton from the Syrian east and north to the rest of the country. It was also a road used for the exchange of commodities with regional trade partners like Jordan, Saudi Arabia and other Arab states, as well as Turkey.

Regaining control over the highway has been a top priority of the Assad government since the early days of the war.

Its slow and tortuous recovery, in many ways, traces the arc of the Syrian war, which has killed nearly half a million people and uprooted half the country’s pre-war population.

The Syrian government began winning back segments of the highway, starting in 2014. That’s when Russia joined the war on the side of Assad, and essentially tipped it in his favor.

Towns and cities located along parts of the highway, including in the Ghouta region in the suburbs of Damascus, now lie in ruins after long sieges and incessant bombardment forced them into submission. The Russian-backed recapture of Aleppo in December 2016 was another major game-changer.

END OF THE REBELS’ ROAD

Under a September 2018 agreement between Russia and Turkey, the M5 and M4 highways were supposed to be open for traffic, linking the government’s stronghold on the coast with Aleppo before the end of that year. That never happened, as insurgents refused to move away and allow joint Russian-Turkish patrols to protect the traffic there.

That eventually led to the latest government offensive in Idlib, the last rebel-held bastion in the country.

Government troops backed by Russia carried out several major advances in Idlib, retaking towns and villages on both sides of the motorway. The capture of Khan Sheikhoun was the first major breakthrough, followed by Maaret al-Numan and Saraqeb, located on the intersection between the M4 and M5.

This week, Syrian troops recaptured the last rebel-controlled section of the highway around Khan al-Assal. That brought the road under the full control of Assad’s forces for the first time since 2012.

The victory statement came not from the Syrian government, but from Russia’s defense ministry. It said in a statement Wednesday that “Syria’s most important transport artery” had been “freed” from rebel control.

The highway’s capture is possibly the most significant victory for Assad, whose forces have been making solid gains since the end of 2015 with the help of Russian airstrikes and Iran-backed fighters.

Ibrahim, the political analyst, said the highway is so vital because it links the country’s two powerhouses — the capital of Damascus with the former trading hub of Aleppo, now mostly in ruins.

“In other words it links Syria’s political capital with its economic capital,” he said. It also links up with the M4 highway at the Saraqeb knot, opening up traffic to the government’s coastal stronghold of Latakia and the port.

Fighting continues in areas near the highway, and much of Idlib province remains in rebel hands.

But the M5′s seizure goes a long way to re-connect government-controlled areas, after they had been severed from each other for years.