Russia lashes out as Turkey, U.S. and Israel all clash with Syrian troops 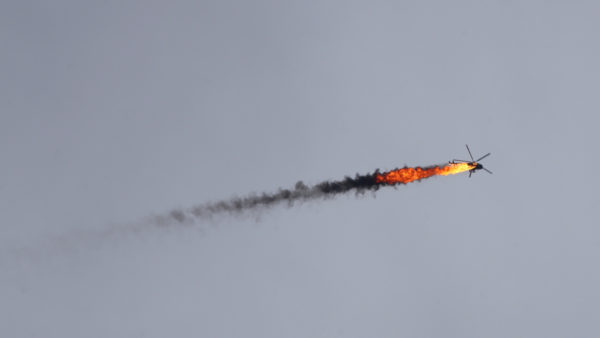 Russia has lashed out against international powers targeting or disrupting the Syrian armed forces’ operations across the country as Damascus’ efforts to restore control were met with resistance from at home and abroad.

Russian Foreign Ministry spokesperson Maria Zakharova told reporters Wednesday that Turkey is “disregarding its commitments” to a ceasefire deal designed to ease tensions between the Syrian military and opposition groups in northwestern Idlib province, the last area of the country under the control of rebels and jihadis. As Syrian troops pressed closer into Idlib, a series of deadly clashes have erupted between them and Turkish forces deployed to observation posts there.

As per the September 2018 agreement with Moscow, Ankara was tasked with facilitating the disarmament and withdrawal of jihadi forces such as the Hayat Tahrir al-Sham coalition, but Turkish President Recep Tayyip Erdogan has accused Syrian and Russian forces of targeting civilians in its air raids.

Dmitry Peskov, the spokesperson for Russian President Vladimir Putin, denied this in a statement Wednesday, arguing that “these are strikes against terrorists and not against civilians,” according to the state-run Tass Russian News Agency. He called on Turkey to adhere to their arrangement

Despite the latest dispute, both Zakharova and Peskov expressed a desire to continue working with Turkey, an early supporter of rebels and jihadis trying to oust Assad for nearly nine years. The 2011 uprising also received backing from a number of other Middle Eastern and Western nations, including the United States, though assistance fell off amid government gains and the rise of the Islamic State militant group (ISIS).

Still, a joint Russian-Syrian military statement carried Wednesday by the official Syrian Arab News Agency indicated that advancing Syrian army units in Idlib and parts of Aleppo province seized material left behind by “terrorist organizations, including Western-made equipment and weapons, which attests to the continued support of terrorists from abroad.”

The U.S. has refused to recognize Assad’s rule, accusing the Syrian leader of war crimes, but has largely abandoned efforts to depose him by force. Russia and Syria have continued to call for a total U.S. military withdrawal, however, as tensions between them and the Pentagon worsened in the country’s northeast.

President Donald Trump’s pulled back U.S. forces from much of northern Syria in October in order to avoid a looming fight between two of his country’s allies: the mostly Kurdish Syrian Democratic Forces and Turkey. The move compelled the Syrian Democratic Forces, to strike a security deal with the Syrian and Russian militaries, which have expanded their presence in the area.

The arrangement also left overlapping lines of control between rival factions and several confrontations have broken out in recent months between U.S. and Russian forces, with the Syrian Democratic Forces struggling to mediate. On Wednesday, an encounter between U.S.-led coalition troops and Syrian government supporters near the mixed-controlled city of Qamishli turned violent.

“In self-defense, Coalition troops returned fire. The situation was de-escalated and is under investigation,” he added. “The Coalition patrol returned to base.”

Both pro-government media and opposition-linked activists in Syria report that U.S. forces killed a local man in the dispute, with the former reporting that he was a civilian and the latter unable to verify that. In a follow-up statement, Caggins only mentioned that “one U.S. soldier had a minor superficial scratch while operating their equipment,” but had since returned to work.

In one clip shared across social media, a crowd of Syrians is seen arguing with U.S. troops gathered around their armored personnel carriers. Another, aired by the Syrian Arab News Agency, shows civilians, including children, throwing large stones the U.S. convoy before gunshots are heard. At least two men are then seen firing toward the U.S. convoy with assault rifles.

As tensions simmer on the frontlines of Syria, another international foe has launched repeated attacks across the heartland of the government’s grip on the country. Israel has occupied the southwestern Golan Heights since 1967 but has not deployed troops elsewhere in the country, relying instead on its aerial prowess to conduct hundreds of strikes on positions associated with Syria’s other major regional backer, Iran, as well as on government anti-aircraft sites attempting to fend off such assaults.

Such operations were reportedly unilateral and Russia has accused Israel of purposely shadowing other aircraft in a bid to induce international incidents such as in September when Syrian surface-to-air missile fire accidentally hit a Russian spy plane off the country’s west coast. After the latest Israeli strikes Thursday, Moscow claimed Syrian retaliatory fire forced a passenger plane to quickly divert from its planned destination at Damascus International Airport to the Russian-controlled Hmeymim Air Base.

The alleged incident came just weeks after an Iranian anti-aircraft battery inadvertently shot down a passenger plane departing Tehran hours after retaliating against the slaying of one of its top generals by launching missiles at U.S. forces in Iraq. Zakharova reiterated Russia’s opposition to Israeli strikes at Wednesday’s press briefing, arguing they were “among the destabilizing factors” preventing peace from being realized in the country.

“Not only do such unilateral actions undermine Syria’s sovereignty, they put the lives and security of civilians at risk,” she added. “This is what took place on February 6, when a passenger aircraft with 172 people onboard nearly came in the line of fire due to the actions of the Israeli air forces.”

Tehran too assured Damascus of its continued support on Wednesday. Iranian Foreign Ministry spokesperson said in a separate briefing that “the presence of the Islamic Republic of Iran in Syria is at the invitation of and agreement with this country’s government with the aim of combating U.S.- and Israel-backed terrorism.”