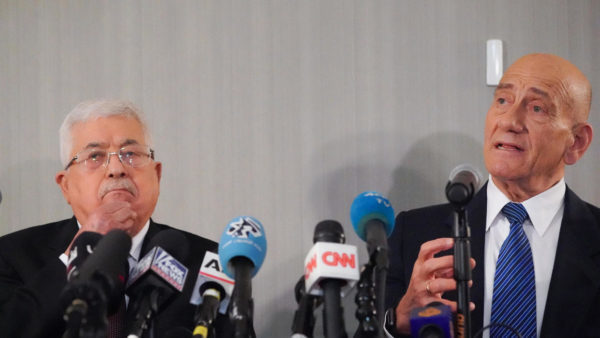 Olmert, Netanyahu’s centrist predecessor who led Israel from 2006 to 2009, met with Abbas in New York hours after the Palestinian leader went before the UN Security Council to denounce US President Donald Trump’s Middle East plan.

The former prime minister did not criticize Trump’s plan, which paves the way for Israel to annex much of the West Bank, but said that any future negotiations needed to involve Abbas, an 84-year-old considered a moderate.

“He is a man of peace, he is opposed to terror, and therefore he is the only partner that we can deal with,” Olmert told reporters with Abbas at his side.

Hinting at Netanyahu’s political woes, Olmert said: “Who will be the partner on the Israeli side? We will know later this year.”

Abbas, who succeeded Yasser Arafat in 2005, called Olmert “my dear friend” and said he wanted to “extend my hand to the Israeli people.”

“We want to achieve peace through peaceful means and negotiations,” he said. “Let me reiterate again, we are against and do not want violence.”

Danon told the Security Council that the Palestinians needed a new leader, saying that Abbas was unable to consider the “realistic” proposals of Trump.

Olmert “is endorsing diplomatic terrorism against Israel. It is shameful,” Danon said after Olmert met Abbas.

Olmert is close to Netanyahu’s centrist rival Benny Gantz who went neck-and-neck with the prime minister in two inconclusive elections last year, with a third vote scheduled for March 2.

Olmert, however, said he was not speaking for Gantz.

Olmert stepped down under a cloud of corruption scandals. Netanyahu in November was also indicted on charges of bribery, fraud and breach of trust.

Palestinian president Abbas on Tuesday told the UN Security Council that the world should reject President Donald Trump’s Middle East plan, which he said would limit Palestinian sovereignty in a “Swiss cheese” deal.

Brandishing a large map of Israel and Palestine as laid out by Trump’s long-awaited January 28 announcement, Abbas called it a “Swiss cheese” deal that would limit Palestinian sovereignty.

“This is the summary of the project that was presented to us. This is the state they would give us. It’s like a Swiss cheese, really. Who among you would accept such a state?” asked Abbas.

The Palestinians have sought to rally international support against the plan, which Trump unveiled alongside Israeli Prime Minister Benjamin Netanyahu, who has since moved forward on plans to annex vast parts of the West Bank.

Addressing members of the UN Security Council in New York, Abbas said he was speaking “on behalf of 13 million Palestinians to call for a just peace”.

The deal would bring neither peace nor stability to the region, said Abbas. “I would like to say to Mr. Donald Trump that his plan cannot achieve peace and security as it cancels international legitimacy. It cancels all the rights of the Palestinians. This does not meet the aspirations of a two-state solution,” he said.

“If you impose peace it will not last, it cannot last,” he said, asking: “What gives you the right to annex these lands?”