Trump’s ‘Deal of the Century:’ Another failed attempt to impose peace by force 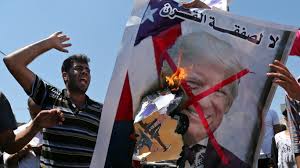 The Arabs must refuse the Trump peace proposal.

There is no doubt that the Middle East peace plan proposed by President Donald Trump is unfair to the Palestinians. In fact, every peace plan since the 1947 partition resolution adopted by the UN General Assembly, has been prejudiced in favor of the Zionist aspirations at the expense of the rights of the Palestinians.

But there is another pattern in the unfolding Palestinian drama. It runs parallel to the failed peace efforts over the past seven decades. Every such effort sponsored by the West resulted in a surge in radicalism in the Arab countries. And the Trump plan is no different.

Media outlets throughout the region are having a fête pushing their extreme ideals, while heaping severe criticism against conservative Arab regimes because they did not denounce the Trump plan strongly enough to please the radicals.

The major criticism against the Trump plan is that it derives its legitimacy exclusively from the military superiority of Israel, while ignoring the legal legitimacy granted to the claims of the Palestinians by scores of UN resolutions. All such resolutions are fully ignored by the “deal of the century.”

But employing the concept of power to impose unjust political settlements to conflicts has been part of the political culture of this part of the world since time immemorial. It is a tool not only of international politics but domestic ones as well. This is apparent in local and regional politics in the Middle East.

At the regional level, Arab regimes have often used military power to resolve disputes with other countries. In the early 1960s, for example, Egypt, under Jamal Abdul Nasser, used its military power to intervene in Yemen in order to undermine the regime of Saudi Arabia. Very much like Iran is doing now. Also, during that same period, Iraq’s Abdul Karim Kassem threatened to invade Kuwait to settle a claim that Kuwait is part of Iraq. His threat was carried out by Saddam Hussein thirty years later.

Still, politicians in Syria, Egypt, Libya and Iraq, countries which were described as radical states, imposed on their peoples corrupt and tyrannical regimes. They did so by using intimidation and brute force to quell any opposition. More recently, in Lebanon, Hizbullah imposed its control on the Lebanese state by employing brute force and terror that culminated on May 7, 2008 when its militants took over Beirut and parts of the mountain area. The Iranian backed party crippled the Lebanese state while embracing the ideal of liberating Jerusalem.

Back in 1971, Iran used its military power to occupy three islands that belong to the United Arab Emirates. Tehran has since refused UAE proposal to refer the issue to international arbitration. It insists on the use of military force to resolve the dispute.

The Iranian assault was part of the Shah’s aspiration to spread Iranian influence throughout the region. Such aspiration has been embraced by the Islamic Republic.

The Arabs must refuse the Trump peace proposal. But it is important that they also reject, with equal determination, regimes that imposed on them by sheer force and intimidation, while using the Palestinian tragedy as cover for their corruption and tyranny.