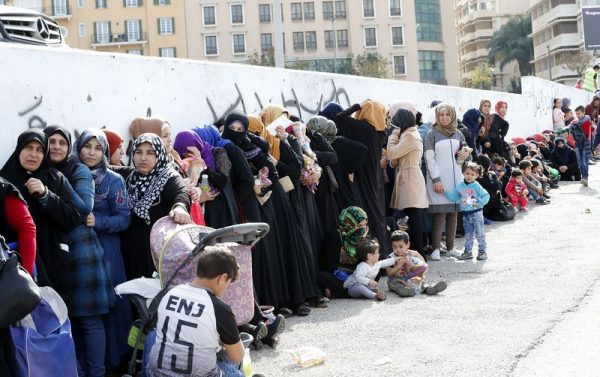 File photo: Syrian refugees queue to receive aid in Beirut, Lebanon, on Nov. 26, 2017. With its population of almost six million, Lebanon is home to one and a half million Syrian refugees. Pro rata, it is like Britain absorbing around 20 million ( or the United states absorbing over 100 million) destitute people Photographer: Anwar Amro/AFP/Getty Images
Share:

Lebanon’s new government “unanimously” approved a new Policy Statement which is set to include a clause demanding displaced persons leave the country.

The repatriation clause, requested directly by Lebanese President Michel Aoun, will say “that the majority of displaced [persons] entered [the country] to escape the dreadful security conditions, and they must return since those conditions no longer exist”, Information Minister Abdul Samad said.

“President Aoun has said that some countries are opposed to the return of the displaced and we wonder about the reasons behind such an objection,” Abdul Samad added.

According to the UN, Lebanon hosts approximately 250,000 Palestinian, and 1.5 million Syrian refugees, living in 12 camps across the country. However, estimates suggest there are many more dwelling in informal settlements, particularly in the Bekaa Valley, close to the Syrian border.

Overpopulation and lack of developed infrastructure has strained already crumbling social and public services and contributed to the country’s worst economic crisis since the end of the civil war.

According to the Washington Post, Lebanese have increasingly blamed dependents and refugees for national misfortunes.

In previous years, Lebanon has allegedly “forcibly deported” Syrian refugees, and made those living in Arsal, a town close to the country’s eastern border, destroy their own homes, to pressure refugees into returning to Syria.

Palestinians have consistently been blocked from working in the country, with mass protests in July 2019, after the Lebanese government cracked down on businesses hiring foreign workers without permits.

Nevertheless, Prime Minister Hassan Diab’s 20-member cabinet, formed last month by Hezbollah and its political allies, hold a parliamentary majority, and have been labelled as the “government to face the challenges”.

Abdul Samad said “the main trust we need is the people’s” in reference to ongoing anti-government protests which started in October, with plans to “regain international confidence when they touch the reforms we are about to implement”.

A leaked draft of the Policy Statement said the government will use “necessary and painful steps” to alleviate the deepening economic crisis and intends to implement the 2019 energy plan to bring 24/7 electricity to the country for the first time since the outbreak of the civil war.

After agreeing on the Policy Statement , President Aoun said that “it is imperative to start work immediately to make up for lost time”.