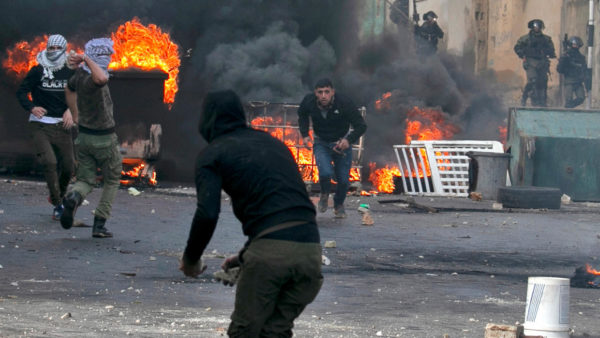 Israeli forces shot dead a Palestinian during clashes in the occupied West Bank on Friday, the Palestinian health ministry said, part of a spike in violence since Washington announced a controversial Middle East plan.

The fatality brings to four the number killed in clashes and violence in the occupied West Bank and Jerusalem after US President Donald Trump angered the Palestinians with his plan released last week.

The Palestinian health ministry said Badr Nafla, 19, died after being shot by Israeli forces in the neck during clashes near the northern West Bank city of Tulkarem.

On Thursday, two Palestinians were killed in clashes in the West Bank and an Arab Israeli was shot dead after opening fire on police near the Al-Aqsa mosque in Jerusalem’s Old City.

Fourteen Israelis were injured in a car ramming targeting soldiers in Jerusalem the same day.

Israeli security had deployed additional forces Friday in the West Bank and Jerusalem, where 25,000 Palestinians gathered at Al-Aqsa for noon prayers that passed off without incident, an AFP photographer said.

The site is a flashpoint in the Israeli-Palestinian conflict and is holy to both Muslims and Jews, who refer to it as the Temple Mount.

Israeli police spokesman Micky Rosenfeld told AFP there was “heightened security in Jerusalem,” including extra units, particularly “in and around the area of the Old City”.

He said an increased police presence would remain.

On Thursday, two Palestinians were killed in clashes between the Israeli army and stone-throwing demonstrators in the northern city of Jenin.

In Jerusalem a man drove his car into a group of Israeli soldiers, injuring 14 before fleeing the scene, officials said.

He was later arrested and is being questioned, Rosenfeld said, adding that there had been no new security incidents since Thursday evening.

The rise in violence comes a week after Trump’s release of his vision for resolving the Israeli-Palestinian conflict.

It would grant Israel a number of its long-held goals, including full control of disputed Jerusalem and a green light to annex all settlements and other parts of the West Bank.

In exchange the Palestinians would be offered a state in the remaining parts of the West Bank and Gaza.

Jared Kushner, Trump’s son-in-law and chief architect of the plan, said Thursday that Abbas “does have a responsiblity” for the uptick in violence.

“He calls for days of rage in response and he said that even before he saw the plan,” Kushner told reporters after briefing UN Security Council members on the plan behind closed doors in New York.

“But he blames President Abbas because according to those like him, our mere existence and rights…are the problem,” Erekat added.