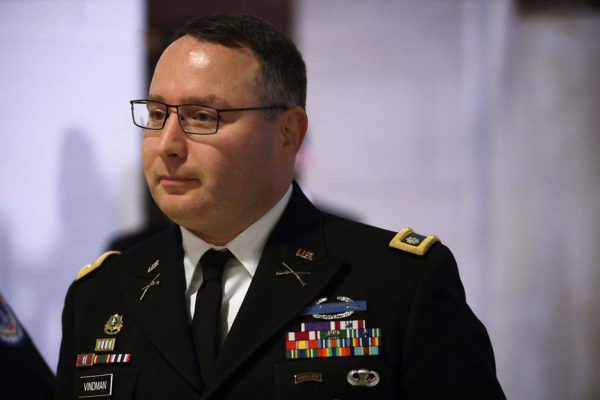 The purge of impeachment witnesses has begun.

Within hours of each other, President Donald Trump and the White House removed two of the most crucial witnesses against the president in the investigation that led to his impeachment for abuse of power.

Late Friday, news emerged that Trump had ordered the recall of Gordon Sondland, the U.S. Ambassador to the European Union — “effective immediately,” the ambassador noted in a statement. Hours earlier, the White House escorted out Lt. Col. Alexander Vindman, the top Ukraine policy officer on the National Security Counsel — along with his twin brother Yevgeny, who was not an impeachment witness.

The succession of personnel moves came amid a promise of “payback” by White House officials against those who testified or played a role in the impeachment of the president. Trump has spent the two days since his acquittal by the Senate railing against his perceived enemies. He slammed Sens. Mitt Romney and Joe Manchin earlier Friday for their votes to convict him, and he retweeted calls by his allies to exact revenge on his opponents, including the Democratic lawmakers who led the drive against him.

Several of the top witnesses in the impeachment inquiry — including former U.S. envoy to Ukraine Marie Yovanovitch and former top U.S. envoy to Ukraine Bill Taylor — departed the State Department in recent days. Others, including former State Department hand Michael McKinley, former Ukraine envoy Kurt Volker and Vindman’s NSC supervisor Tim Morrison, left during the course of the House investigation that ultimately resulted in Trump’s impeachment on charges that he abused his power and obstructed a congressional inquiry. The Senate acquitted Trump of both charges Wednesday, which was followed quickly by a vow from the White House to exact retribution on those who crossed the president.

A handful of the House’s 17 witnesses remain in their posts.

Vindman’s removal from a detail at the NSC came hours after the president told reporters he was “not happy” with the aide. One of Vindman’s lawyers, David Pressman, said his ouster was clear political retribution for his role in the impeachment inquiry. “There is no question in the mind of any American why this man’s job is over, why this country now has one less soldier serving it at the White House,” Pressman said in a statement shared with reporters.

“The truth has cost LTC Alexander Vindman his job, his career, and his privacy,” Pressman said.

Vindman’s attorney indicated that the Iraq War veteran’s twin brother Yevgeny, who serves as a senior lawyer on the NSC, was also removed from his post and exited the White House alongside his brother.

Pressman said Yevgeny Vindman’s ouster came with “no explanation” and that he is “deeply disappointed that he will not be able to continue his service at the White House.”

An Army spokeswoman said in a statement that the two men had been transferred: “We can confirm that both Lt. Cols. Vindman have been reassigned to the Department of the Army, out of respect for their privacy, we will not be providing any further information at this time.

Alexander Vindman, a military officer on active duty, told lawmakers in November that he had deep concerns about Trump’s posture toward Ukraine, particularly during a July 25 call in which Trump pressed the country’s new president, Volodymyr Zelensky, to investigate his Democratic rivals, including former vice president Joe Biden.

Vindman testified that he flagged Trump’s call to a top White House lawyer because he considered it improper. His testimony elicited a mid-hearing attackfrom the official White House Twitter account and drew the ire of the president’s allies.

But it was Sondland’s testimony that had the potential to be the most damning. Sondland, a million-dollar donor to Trump’s inauguration, was tasked by Trump with coordinating Ukraine policy along with Energy Secretary Rick Perry and Ukraine envoy Kurt Volker. He told lawmakers that he came to believe that Trump withheld military aid and a White House meeting from Ukraine in order to force the nation — dependent on U.S. support in a war with Russia — to boost his political prospects.

The allegations formed the underpinnings of the two articles of impeachment passed by the House: that Trump abused his power in orchestrating a corrupt quid pro quo with Ukraine — and then obstructed Congress’ investigation of the affair.

“I was advised today that the President intends to recall me effective immediately as United States Ambassador to the European Union,” Sondland said in a statement. “I am grateful to President Trump for having given me the opportunity to serve, to Secretary Pompeo for his consistent support, and to the exceptional and dedicated professionals at the U.S. Mission to the European Union. I am proud of our accomplishments. Our work here has been the highlight of my career.”

After voting to acquit Trump, some GOP senators said they believed Trump would be chastened and exercise caution in the future — a notion he quickly refuted, insisting that he had acted “perfectly” in every respect. Sen. Susan Collins (R-Maine), one of those lawmakers, said she would oppose any retaliation against witnesses who cooperated with the House.

“I’m obviously not in favor of any kind of retribution against anyone who came forward with evidence.”

The unceremonious removal of the Vindmans was quickly denounced by Democrats as an act of retribution against those who testified against Trump, one previewed by a White House that has warned of “payback” for Trump’s detractors.

Speaker Nancy Pelosi called the move “a clear and brazen act of retaliation that showcases the president’s fear of the truth.”

Rep. Eliot Engel, chairman of the House Foreign Affairs Committee, called it “shameful” and said GOP senators who acquitted Trump would be asked to account for Vindman’s removal.

“The administration’s dismissal of Lt. Col. Vindman, his brother and US Ambassador to the European Union Gordon Sondland is clear political retaliation, the likes of which is seen only in authoritarian countries around the world,” said Sen. Bob Menendez (D-N.J.), the top Democrat on the Senate Foreign Relations Committee.

“He was assigned to NSC to serve the President who has a right to have people he trusts on his staff,” Rubio tweeted, adding, “Sondland was a politically appointee. No point in having a political appointee who no longer has the Presidents confidence.”

Sondland and the Vindmans were not Trump’s only target on Friday.

The president attacked Manchin (D-W.V.) on Twitter for voting to remove him from office despite flirting with acquittal. And Trump has saved his harshest words for Romney (R-Utah), who became the first senator in history to vote to convict a president of his own party. Trump has specifically questioned Romney’s claim that he relied on his faith to guide his decision, while the White House sent around talking points for going after the Utah senator.

There are also rising concerns that a whistleblower who initially raised allegations that Trump may have abused his power — an intelligence community employee who reported his concerns to an internal watchdog — could find himself vulnerable. An attorney for the whistleblower, Mark Zaid, would not comment on any threats to his client’s current employment, but Trump and his allies have been calling to publicly identity the whistleblower, and some allies have floated the name of the person they believe it to be.

“He was not ‘fired’ per se as he remains an active duty Army officer and will be reassigned elsewhere,” Zaid noted in a tweet about Alexander Vindman. “And let’s also not overlook the fact he may very well be relieved to be out of the WH! Could you blame him!”

Earlier in the day the president made clear that he expected action on Vindman, but said the NSC would decide what to do with him.

“Well, I’m not happy with him,” the president told reporters in comments on the White House lawn. “You think I’m supposed to be happy with him? I’m not. They’ll make that decision.”

Less than an hour later, Trump was retweeting posts calling for Vindman to be fired “ASAP.”

Vindman’s removal from his post came amid three months of relentless attacks by Trump’s allies in Congress, the White House and on Fox News, questioning the Iraq War veteran’s patriotism and honesty. Sen. Marsha Blackburn (R-Tenn.) launched a multi-day string of Twitter attacks on Vindman during the impeachment trial.

Donald Trump Jr. gloated in a tweet that House Intelligence Chairman Adam Schiff, who helped lead the impeachment inquiry, should be credited with getting these witnesses pushed out: “Were it not for his crack investigation skills, @realDonaldTrump might have had a tougher time unearthing who all needed to be fired. Thanks, Adam!”

Vindman’s removal and Sondland’s ouster comes as several of the other 17 witnesses in the House’s impeachment inquiry have returned to the news.

For example, Jennifer Williams, a former aide to Vice President Mike Pence who testified alongside Vindman and similarly raised concerns about Trump’s July 25 call, is moving to a new role at CENTCOM this spring, sources revealedlast week. Taylor, the former top U.S. envoy to Ukraine, left his post last month and took to the pages of the Washington Post to chide Pompeo for wondering whether Americans cared about Ukraine.

And Yovanovitch, the former U.S. ambassador to Ukraine ousted by Trump amid a smear campaign by his allies, detailed her impeachment experience in an op-ed earlier in the week, applauding those who would call out “wrongdoing” by powerful officials.

Vindman’s departure comes as national security adviser Robert O’Brien is shrinking and restructuring the National Security Council. But it was not clear if Vindman’s ousting was in any way related to that reorganization or if that was what he was told along the way. White House spokesmen did not point to that effort as the reason for pushing Vindman out before his detail to the NSC was slated to finish in July.

O’Brien has said his goal is to bring the NSC down to fewer than 120 policy staffers from around 174. The plan was to achieve that lower figure largely through attrition, by not extending some staffers’ details and in some cases curtailing details.

Most of the NSC policy staff consists of people detailed to the organization from other agencies and departments, including Defense, State and the CIA. The details usually last a year or two.

Former U.S. diplomats were among those praising the people who got the ax on Friday.

“Everyone being fired today should wear it as a badge of honor. When history found you, you stood up to be counted,” tweeted Dana Shell Smith, a former U.S. ambassador to Qatar.