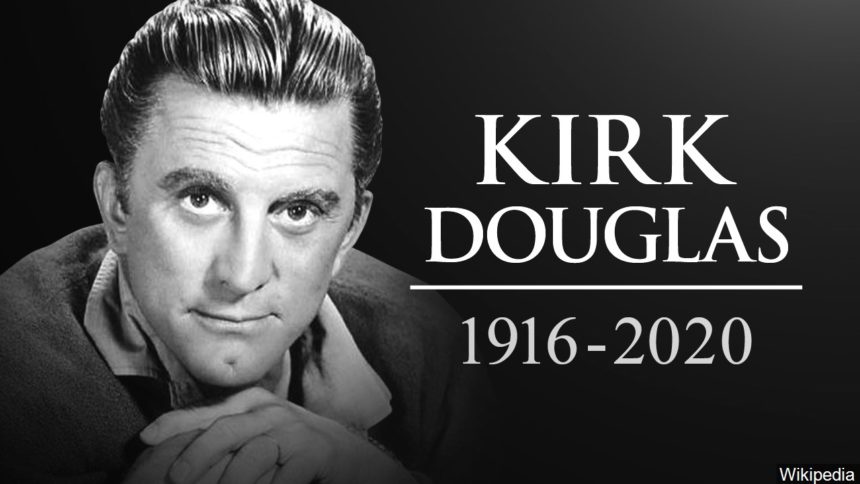 Kirk Douglas, the legendary actor who was one of the last remaining stars of Hollywood’s Golden Age, has died at the age of 103.

“It is with tremendous sadness that my brothers and I announce that Kirk Douglas left us today at the age of 103,” he wrote. “To the world he was a legend, an actor from the golden age of movies who lived well into his golden years, a humanitarian whose commitment to justice and the causes he believed in set a standard for all of us to aspire to. But to me and my brothers Joel and Peter he was simply Dad, to Catherine, a wonderful father-in-law, to his grandchildren and great grandchild their loving grandfather, and to his wife Anne, a wonderful husband.”

Michael Douglas added that his father’s life “was well lived, and he leaves a legacy in film that will endure for generations to come, and a history as a renowned philanthropist who worked to aid the public and bring peace to the planet.”

He added: “Let me end with the words I told him on his last birthday and which will always remain true. Dad- I love you so much and I am so proud to be your son.”

Kirk Douglas starred in dozens of films, including “20,000 Leagues Under the Sea,” “Spartacus” and “Champion.” He earned three Oscar nominations over his career for “Champion,” “The Bad and the Beautiful” and “Lust for Life.” He received an Honorary Oscar in 1996 for his contributions to the film industry.

Born to Russian immigrant parents, the self-made star established himself as an actor following World War II, capitalizing on his looks and athleticism. In that regard, he had a good deal in common with another titan of those years, Burt Lancaster, with whom Douglas co-starred in seven movies, including “Gunfight at O.K. Corral” and the political thriller “Seven Days in May.”

Still, Douglas exhibited a range that went beyond what was available to stars during an earlier stretch of the studio system. And like Lancaster, he seized control of his career in the mid-1950s by forming his own production company, using that leverage not only to find interesting parts for himself but to champion prestige material, as well as talent like director Stanley Kubrick, with whom he collaborated on”Paths of Glory” and “Spartacus.”

Perhaps foremost, Douglas was as comfortable — and as good, if not better — playing a bad guy, a heel, as he was a traditional hero. His steely edge shone through starting with the film noir classic “Out of the Past” in 1947, followed by “Champion,” “The Bad and the Beautiful” and “The Vikings.”

Douglas was equally comfortable with action and serious drama, combining a nasty streak with a wry sense of humor. He excelled at playing terrible characters who nonetheless left the audience feeling a measure of sadness, in spite of themselves, when they met an untimely end.

In addition to his career achievements, Douglas had a full personal life.

He and his wife, Anne Buydens, were married for 65 years. He had four sons, Michael, Joel, Peter and Eric Douglas. Eric Douglas died of a drug overdose in 2004.

Funeral arrangements for Kirk Douglas have not been announced.