Pelosi’s ripping of Trump’s speech was divisive but effective 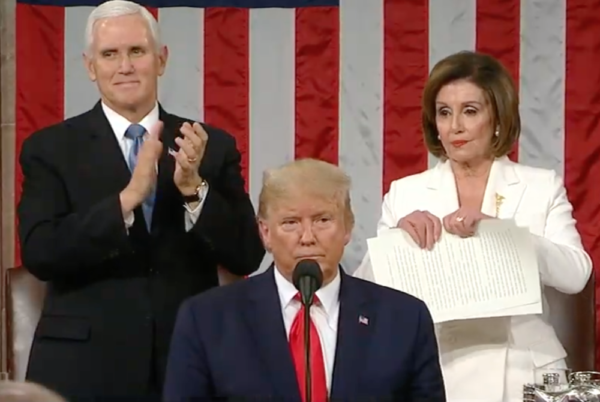 House Speaker Nancy Pelosi’s shredding of President Trump’s State of the Union speech was ripped right from Trump’s playbook.It was unprecedented behavior for a speaker, aggressively rude and unapologetically meant to rile up her base. It was divisive, but effective.The tear seemed to get just as much morning TV attention as the content of Trump’s speech. Conservatives denounced her disrespect. Liberals praised her passion. Both sides were incentivized to heap attention onto the moment. It took the Democrats three years, but they may have finally figured out how to control a news cycle in the Trump era.

Overnight and into the morning, the video snippet was shown on a loop on TV and the web. It was, even some of Pelosi’s critics begrudgingly admitted, perfect fodder for the meme wars.

“She gave us something to talk about. She knew exactly what she was doing,” Fox’s Steve Doocy said as he reenacted the ripping to great effect.It turned the annual address into a personality clash between a Republican man who said he was turning America around and a Democratic woman who said he was lying.On social media, partisans argued over “who started it” — Pelosi by leading the House to impeach Trump, or Trump by appearing to ignore her outstretched hand when he walked into the House chamber on Tuesday night.Some wondered if Pelosi was deliberately replacing one meme-worthy moment with another.

Newspaper editors revised their front pages accordingly. The New York Times replaced a photo of a stone-faced Pelosi sitting behind Trump with a livelier photo of Pelosi in mid-tear. The new subheadline said “Tensions Grow as He and Pelosi Swap Snubs.”The rip-seen-round-the-country totally overshadowed the official Democratic rebuttal address.Around midnight, as cable commentators chewed on the meaning of the tear, Pelosi’s office issued a statement that seemed to justify her action by pointing out some of the false claims Trump made. “The manifesto of mistruths presented in page after page of the address tonight should be a call to action for everyone who expects truth from the President and policies worthy of his office and the American people,” Pelosi said.The president’s defenders ignored the factual issues with Trump’s speech and targeted Pelosi instead — Sean Hannity called the ripping moment “one of the most classless things ever done in the history of the State of the Union.‬”In the morning, Fox commentator Jason Chaffetz said “I have never seen anybody act so childish in my life.”The “Today” show led with a graphic titled “ON A TEAR,” and then had a discussion about the act with a conservative and a liberal guest. The Democrat, Claire McCaskill, said the ripping wasn’t her “favorite” move, but “it was a speech that was full of lies.”Trump produced his own morning show on Twitter, with a burst of anti-Pelosi retweets, many featuring the hashtag #PelosiTantrum. By 8 a.m., he had shared more posts about her than about his own speech.Over on “Fox & Friends,” Vice President Pence laid into Pelosi, saying “I wasn’t sure if she was ripping up the speech or the Constitution.”Of course, all of these TV segments and Twitter hashtags reflect choices about how and where to exert attention.Ripping up a piece of paper is only a big story if members of the media decide to make it a big story, and if members of the public respond by reading and watching and reacting.Whether these attention-grabbing tactics are in the best interest of the country, well, that’s a debate that requires more than one TV segment worth of time. Producers would rather move on to the next controversy instead.