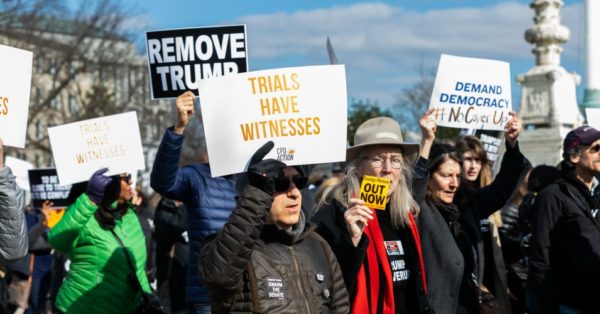 Activists participate in a rally calling for witnesses in the Senate impeachment trial of U.S. President Donald Trump at the U.S. Capitol in Washington, D.C. January 29, 2020. (Photo: Aurora Samperio/NurPhoto via Getty Images)
Share:

As lawyers, we have sworn an oath to protect and defend the U.S. Constitution, and that oath compels us to speak out today.”

More than 200 lawyers on Friday marched from the U.S. Capitol building to the steps of the Supreme Court to demand that the Senate call witnesses in President Donald Trump’s impeachment trial as Republican senators moved closer to ending the proceedings with an acquittal.

“We gather today in our nation’s capital to demand that United States senators honor their oath to do impartial justice in the impeachment trial of President Donald Trump,” one attorney said at a rally in front of the Supreme Court. “As lawyers, we have sworn an oath to protect and defend the U.S. Constitution, and that oath compels us to speak out today.”

The demonstration came as the Senate debated whether to allow witnesses in Trump’s impeachment trial just after the New York Times reported that President Donald Trump in May of 2019 directed former national security adviser John Bolton to “help with his pressure campaign to extract damaging information on Democrats from Ukrainian officials”—a revelation that intensified calls for Bolton to testify.

But the vote to call witnesses is widely expected to fail after two key Republicans, Sens. Lamar Alexander (Tenn.) and Lisa Murkowski (Alaska), announced they would vote no.

With a final vote on whether to acquit or remove Trump exected as early as Friday evening, progressive advocacy groups urged the U.S. public to take to the streets at 5:30pm local time for emergency nationwide protests.

“History must show that we resisted,” tweeted Women’s March. “Join us today… for an emergency protest to demand witnesses and evidence in the Senate impeachment trials!”

America will never forget this impeachment trial sham and those whose cowardice perpetuated it,” tweeted advocacy group By the People. “But let history show that the American people did not go quietly in the face of injustice.”