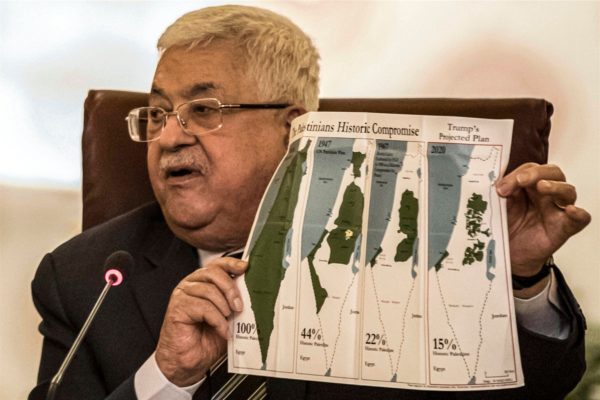 The Arab League rejected U.S. President Donald Trump’s Middle East peace plan at a meeting of foreign ministers in Cairo on Saturday, saying it would not lead to a just peace deal.

In a communique, the Arab League said it would not cooperate with the US to execute the plan because it “does not meet the minimum rights and aspirations of Palestinian people.”

The pan-Arab bloc also said Israel should not implement the initiative by force.

The meeting at the Arab League headquarters came at the request of the Palestinians.

“The plan leads to a status that amounts to a one-state situation that comprises two classes of citizens, that is apartheid, in which the Palestinians will be second-class citizens, deprived of the basic rights of citizenship,” Arab League Secretary General Ahmed Aboul Gheit said in Cairo.

US President Donald Trump unveiled the long-awaited one sided proposal that strongly favors Israel this week in Washington.

It would allow Israel to annex all its West Bank settlements — which the Palestinians and most of the international community view as illegal — as well as the Jordan Valley, which accounts for roughly a fourth of the West Bank.

In return, the Palestinians would be granted statehood in Gaza, scattered chunks of the West Bank and some neighbourhoods on the outskirts of Jerusalem, all linked together by a new network of roads, bridges and tunnels.

Israel would control the state’s borders and airspace and maintain overall security authority.

Critics of the plan say this would rob Palestinian statehood of any meaning.

The plan would abolish the right of return for Palestinian refugees displaced by the 1948 war and their descendants, a key Palestinian demand.

The entire agreement would be contingent on Gaza’s Hamas rulers and other armed groups disarming, something they have always adamantly rejected.

President Mahmoud Abbas, who attended the gathering in Cairo, said he remained committed to ending the Israeli occupation and establishing a Palestinian state with its capital in east Jerusalem.

“I will not have it recorded in my history that I have sold Jerusalem,” he said, adding that he would cut security ties with the US and Israel.

Abbas said earlier that his response to Trump’s proposal was “a thousand no’s.”

Diplomatic adviser to Abbas, Majdi al-Khaldi, had said the Cairo meeting’s goal would issue a “clear declaration” rejecting the deal.

Saudi Arabia and Egypt — close allies of the US — have maintained a neutral position on the plan, saying they appreciated Trump’s efforts and calling for renewed negotiations.

But Jordan, who has a peace treaty with Israel, warned against any Israeli “annexation of Palestinian lands” and reaffirmed its commitment to the creation of a Palestinian state that included all the West Bank and Israeli-annexed east Jerusalem.

Europe and the UN were lukewarm and cautious after the peace plan was released.

German Foreign Minister Heiko Maas has called for a balanced approach to breaking the deadlock. “Only a negotiated two-state solution, acceptable to both sides, can lead to a lasting peace between Israelis and Palestinians,” he said.

Maas added that Trump’s proposal raised questions “about the involvement of the conflicting parties in a negotiation process and their relationship to recognized international parameters and legal positions.”

Representatives from the Christian Democratic Union (CDU) and Social Democratic Party (SPD), parties within the grand coalition, doubted that Trump’s plan would achieve sustainable peace in the Middle East.

Jürgen Hardt, a foreign policy spokesman for Angela Merkel’s CDU/CSU alliance in parliament, told DW that while he welcomed Trump “sticking with the two-state solution,” he also worried that “probably some of the demands he mentioned towards Palestinians concerning the territories will not open the door for negotiations.”

Hardt also noted that “every new attempt at the peace process which is a failure in the end might increase frustration on both sides and maybe increase the confrontation and not decrease it. Therefore, we have to be very careful with such proposals.”

UN Secretary-General Antonio Guterres said the UN supports two states living in peace and security within recognized borders, on the basis of the pre-1967 lines.

“The position of the United Nations on the two-state solution has been defined, throughout the years, by relevant Security Council and General Assembly resolutions by which the Secretariat is bound,” said Stephane Dujarric, a spokesman for Guterres.

The EU urged Israelis and Palestinians to study the proposal carefully.

Josep Borrell, the EU’s highest-ranking diplomat, said the block will “study and assess” Trump’s plans on the basis of its commitment to a “negotiated and viable two-state solution that takes into account the legitimate aspirations of both the Palestinians and the Israelis.”

Russia said it would assess the proposal and called on Israelis and Palestinians to negotiate directly to find a “mutually acceptable compromise.”

Deputy Foreign Minister Mikhail Bogdanov added, “We do not know if the American proposal is mutually acceptable or not. We must wait for the reaction of the parties.”