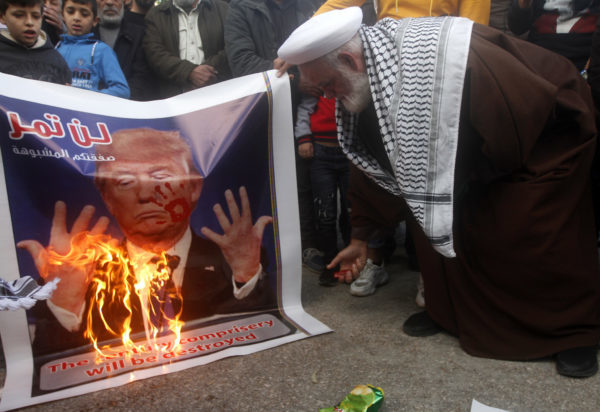 A Palestinian cleric burns a banner that shows a portrait of the U.S. President Donald Trump with Arabic words that read:”Your suspicious deal will not pass,” during a protest against the White House plan for ending the Israeli-Palestinian conflict, at Rashidiyeh Palestinian refugee camp, southern Lebanon, Wednesday, Jan. 29, 2020. (AP Photo/Mohammed Zaatari)
Share:

Amina Ali al-Hajj was a child when her family was expelled from Akka, on Palestine’s northern coast, to Lebanon in 1948.

Now she, like many Palestinian refugees living in Lebanon, see the hope of return moving further out of reach.

Hajj joined other residents of the crowded Bourj al-Barajneh Palestinian refugee camp in Beirut’s southern suburbs on Wednesday, protesting the United States’ newly proposed plan to address the Israel-Palestine conflict. Donald Trump’s so-called “deal of the century” falls far short of anything acceptable for those displaced in Lebanon.

“Our people are rooted in their rights and are holding onto the right to return, to the right of citizenship in an independent Palestinian state with complete sovereignty and its capital in Jerusalem,” Ahmad Sakhnini, a representative of the Democratic Front for the Liberation of Palestine in Bourj al-Barajneh, told MEE.

The current plan, he said, does not meet those criteria: “We will not accept any other solution.”

Unveiled by Trump and Israeli Prime Minister Benjamin Netanyahu on Tuesday, without the participation of any Palestinians, the plan was praised by Israeli leaders and promptly rejected by their Palestinian counterparts.

The plan proposes that illegal Israeli settlements and the Jordan Valley are annexed to Israel, offering a future Palestinian state a land swap for other territory in return, and would designate Jerusalem as the capital of Israel state, with a capital for the Palestinians on the city’s eastern outskirts.

The state of Palestine would be demilitarised, and Israel would retain control over its borders.

As to the right of return, the plan would allow for Palestinian refugees who have not “already resettled in a permanent location” – a condition that has yet to be defined – to apply for resettlement in the future Palestinian state.

But the right to return would not apply to lands within the borders of Israel, like Hajj’s family home in Akka.

There are an estimated 180,000 Palestinian refugees resident in Lebanon, alongside some 29,000 others who have settled in the country after fleeing the war next door in Syria.

Those wanting to return to the Palestinian state would also be subject to vetting and potential rejection for security reasons, the plan said, noting that “many Palestinian refugees come from war torn countries, such as Syria and Lebanon, that are extremely hostile toward the state of Israel”.

The document proposed that a committee of Israelis and Palestinians should be set up to address the issue, although it was unclear exactly what the committee’s powers would be.

The White House press office did not respond to a request for comment as to who would have the ultimate decision-making power over resettlement admissions.

Under the plan, those ineligible for return to Palestine might receive compensation from a fund to be set up for the purpose and would either be integrated in their current host countries or – for some 50,000 of them – in Organisation of Islamic Cooperation countries that would agree to take them.

Amnesty International criticised the proposal to provide compensation in lieu of a right of return.

“Palestinians who fled or were expelled from their homes in 1948, and their descendants, have a right to return under international law,” the rights group wrote. “This is an individual human right which cannot be given away as a political concession.”

The plan also raised alarm among Lebanese officials, who saw it as a threat to force permanent settlement of the Palestinians.

The presence of the Palestinian refugees in Lebanon, and the degree of rights they should be accorded, is a perennially thorny political issue. Palestinians in Lebanon have limited rights to work and own property. Last year, the Palestinian camps erupted in protests after the labour ministry launched a crackdown on businesses employing non-Lebanese workers without work permits, ousting many Palestinians from their jobs.

But on at least one issue, the various Lebanese political factions and the Palestinians themselves agree: refugees should be able to return to their pre-1948 homes.

Following the US plan’s launch, Lebanese President Michel Aoun called his counterpart at the Palestinian Authority, Mahmoud Abbas, and stressed that Lebanon supports “the right of the Palestinians to return to their lands and the establishment of their independent state with Jerusalem as its capital”.

Nabih Berri, the speaker of parliament, issued a statement calling the deal “a bribe to sell the rights, sovereignty, dignity, and Palestinian Arab lands with Arab money”.

“Lebanon and the Lebanese will not be false witnesses in the new death penalty against the Palestinian people and their legitimate rights, including their right to return home,” he said. “We will not accept, regardless of the conditions, to be an accomplice in the sale or exchange of these rights.”

Meanwhile, Hassan Mneimneh, the head of the Lebanese-Palestinian Dialogue Committee, a body set up by the government to oversee refugee affairs, said in the statement that the proposed deal “carries the most serious risks not only to the people and the Palestinian cause, but to the rest of the countries and entities of the Arab region”.

In Bourj al-Barajneh, some refugees, while refusing to return to Palestine under the current conditions, also said they do not want Lebanese citizenship.

“In this country, we are visitors,” said Aisa Ghadban, who raised four sons with his wife in the camp. “We don’t want to settle here or in any other country. We want to return to our country – we want to free Palestine and return.”

His wife, Mariam Mohammed Barazeh, added: “If we can’t return, our children will return, or our grandchildren.”

One of the youngest protesters, 11-year-old Malak Omar Steitieh, echoed their comments.

“God willing, our mothers and fathers and siblings, all of us will go back to Palestine,” she said.

“And Trump, no matter how rich he is and how much money he wants to give us, we won’t accept it, because we are the Palestinian people and, God willing, we will reach our dream of returning to Palestine.”