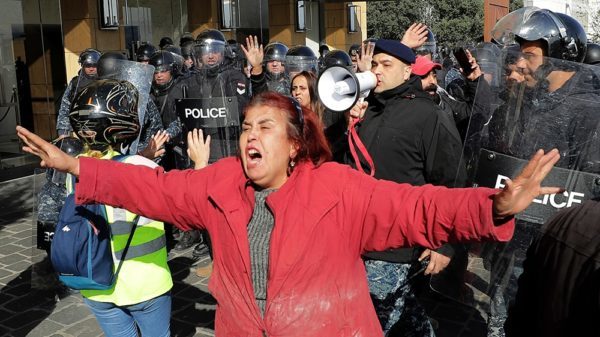 Fear of what the future may hold is palpable, as economic crisis deepens and living standards plummet rapidly.

Beirut, Lebanon – Like many people in Lebanon, Mohammad Ibrahim, a butcher in Beirut’s Aicha Bakkar area, has endured months of financial hardship.

And he sees nothing but more pain on the horizon.

Since nationwide protests broke out in October with thousands railing against government corruption and economic mismanagement, even Ibrahim’s most loyal customers have cut their purchases by roughly half.

“The work is arriving at a rate of 50 percent, because those who have money are losing it,” he told Al Jazeera.

Those losses stem from a host of related factors. Plummeting confidence in the country’s banking sector has fed inflation, sending prices soaring. As faith in the economy falters, businesses close shop or lay off staff, throwing more and more people out of work.

Sara Daouk, a 34-year-old human resources professional in Beirut, said she received her pay cheque for November nearly a month late due to the banking crisis. Now, the mother of two is worried her company might slash salaries and cut back hours in the coming months, biting deeper into her income at a time when she can least afford it.

“The middle class will become wiped out,” Daouk told Al Jazeera. “Where they will go, I don’t know.”

As the country’s economic and political crisis deepens, it has fuelled fears that poverty levels will spike across Lebanon. And though some analysts believe the country can turn its financial fortunes around in the long-run, others are warning that violent demonstrations are likely to grow as living standards plummet.

Megaphone: The voice of Lebanon’s uprising

After being formally tasked with forming a government to address the economic crisis and the social unrest spawned in its wake, Prime Minister Hassan Diab announced a new cabinet on January 21.

But people continue to rail against the government’s inability to act with the urgency many feel the crisis demands.

Earlier this month, protesters targeted financial institutions in a “week of rage” over government inaction and foot-dragging that had lasted for nearly three months.

On January 18 and 19, anti-government demonstrators in the capital Beirut clashed with security forces in some of the most violent confrontations since demonstrations broke out last October.

“People [are becoming] more poor, so they [are becoming] more angry,” Hady Ezzeddin, a protester who clashed with security forces on January 18, told Al Jazeera. “I don’t blame people, I blame the authorities that they didn’t give any solution to solve the situation.”

“People have no choice,” he added. “Unfortunately it will become more violent.”

On January 21 protesters hit the streets again to vent their distrust in the newly formed cabinet, which many believe maintains the power of the country’s traditional party blocs.

All the while, fear of what the future holds is palpable on the nation’s streets.

“If you factor in the increase in prices, [people’s] purchasing power has dwindled by 90 percent,” Sami Nader, the director of the Levant Institute for Strategic Affairs, told Al Jazeera.

Compounding that pain is a sudden loss of income. Research company InfoPro estimates more than 160,000 workers were either temporarily or indefinitely laid off between mid-October and the end of November.

Many Lebanese are moving closer to the brink of poverty.

The World Bank warned in November that if confidence was not restored in Lebanon’s economy, the poverty rate could rise to roughly half the population from about one-third in 2018. Youth unemployment – already high, could also see an even steeper rise.

“Thinking that the level of poverty may grow up to 50 percent is something very logical, and it may grow even higher,” Adib Nehme, the former United Nations Economic and Social Commission for Western Asia told Al Jazeera.

Nehme says that although the absolute poverty rate will remain higher in Lebanon’s north and in the Bekaa Valley, historically less depressed areas like Beirut and parts of Mount Lebanon will see a more noticeable increase, potentially bringing them to a poverty rate of 40 percent.

“From the start, we in Lebanon had a high rate of poverty,” Osama, a young man who works at a shisha shop, told Al Jazeera at a protest against Diab’s nomination in Beirut.

“Now, if the lira continues to rise, and we don’t bring it down, I don’t know what we will do.”

Tripoli, Lebanon’s second-largest and poorest major city, provides a window into what life in Lebanon may look like if Nehme and the World Bank’s estimates come to pass.

Fifty-three percent of working-age people in Tripoli were unemployed in 2017 according to the World Bank, and 77 percent were “deprived” in terms of economic status, according to a 2015 United Nations study.

“We don’t have homes, or any jobs, or anything,” Bassem, an anti-government protester in Tripoli’s Nour Square, told Al Jazeera last month. “I have children who want to eat.”

“In Tripoli, the situation is already dire for the last few years, and it’s worsening,” Mustafa Allouch, a former parliamentarian from Tripoli with former Prime Minister Saad Hariri’s Future Movement party, told Al Jazeera. “Tripoli will probably suffer the most.”

Nehme predicts the poverty rate in Tripoli may soon reach 80 percent and that nationwide participation in Lebanon’s protests will likely increase in the coming weeks and months as access to basic goods and services falls. He even sees this in places where parties like Hezbollah have tried to control dissent through violent crackdowns, with mixed success.

Wadih Akl, a member of the political bureau of the Free Patriotic Movement – one of a handful of parties that backed Diab during consultations – told Al Jazeera that the battle against mounting poverty begins with recovering funds lost to corruption and facilitating the return of refugees to Syria – a controversial measure in Lebanese politics.

The path out of the crisis will also likely require a rescue plan, including reforms to unlock aid from abroad and possibly a bailout from the International Monetary Fund.

But with so many members of the new government hand-picked by traditional political parties, some see little hope for meaningful change.

“The same system is in place,” said Nader. “The system that was responsible for the crisis.”