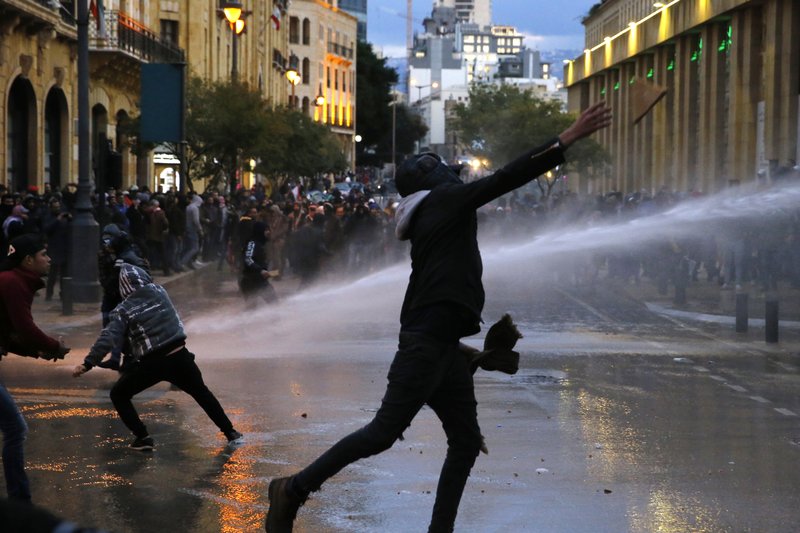 BEIRUT (AP) — Lebanon’s new government made up of appointees nominated by the Shiite group Hezbollah and its allies got down to business Wednesday, a day after it was formed. Questions arose immediately about its ability to halt spiraling violence and economic and financial collapse.

As the government headed by Hassan Diab held its first meeting, protesters briefly closed major roads in and around the capital Beirut, denouncing it as a rubber stamp Cabinet for the same political parties they blame for widespread corruption. Later, a few hundred protesters engaged in some of the most violent confrontations yet with security forces in the capital.

Groups of young men rampaged through streets near Parliament and the Beirut Souks shopping mall in the capital’s commercial district. They smashed windows at luxury shops and restaurants in the shopping area and ripped tiles off buildings and broke them up to use as projectiles to throw at police. The area was the scene of fierce battles between warring factions during the country’s 15-year civil war, which ended in 1990.

Thick gray smoke hung over the city center as police fired volley after volley of gas canisters that left protesters retching and gasping for breath.

2 sides of the same coin

“We are here to say this government doesn’t represent the revolutionaries as the prime minister Hassan Diab says. … They are the same parties, the same corrupt political elite,” said Mahmoud Shaar, a 40-year-old from the southern market town of Nabatiyeh, who was among the protesters.

Protesters first took to the streets in mid-October in a mass uprising against the country’s ruling elite, which they blame for decades of corruption and mismanagement that have brought Lebanon to the brink of economic collapse.

Since then, the country has sunk deeper into a political crisis. The Lebanese pound, long pegged to the dollar, has lost up to 60% of its value against the dollar and banks have imposed unprecedented capital controls to preserve liquidity. The once strikingly peaceful protests, praised around the world, recently turned violent as anger and frustration mounts. Over 500 people were injured over the weekend in confrontations in Beirut that saw security forces fire rubber pullets to disperse protesters.

Although the government announced Tuesday is technically made up of specialists, the ministers were named by political parties in a process involving horse trading and bickering with little regard for the demands of protesters for a transparent process and independent candidates. Key political parties are not part of the government, making it one made up exclusively of nominees backed by Hezbollah and its allies.

Diab vowed to tackle the country’s crippling crisis — the worst since the civil war — saying his Cabinet will adopt financial and economic methods different than those of previous governments. But analysts said it was highly unlikely a government backed by the powerful militant group would be able to drum up the international and regional support needed to avoid economic collapse.

“These ministers and this government will not be able to make independent decisions related to the economy or the political situation, so long as their decisions are up to the parties that formed this government, first and foremost Hezbollah,” said political analyst Youssef Diab.

Sherine, an 18-year-old student studying radio and TV journalism, said she was against the vandalism and violence targeting security forces.

“The government is creating this separation between us. We need to go and break the power holders. This violence might be the only way to achieve anything but I am against it,” she said.

In some of the first international reaction, French President Emmanuel Macron pledged to do “everything” to help Lebanon out of its crisis. He added, however, that France is concerned about any “terrorist activity originating in Lebanon or stirred up in Lebanon, which could threaten Israel as well.”

U.N. Secretary-General Antonio Guterres welcomed the formation of a new government, saying that “he looks forward to working with” Diab and his Cabinet, “including in support of Lebanon’s reform agenda and to address the pressing needs of its people.”

U.S. Secretary of State Mike Pompeo urged the new government to heed the demands of protesters for a nonpartisan leadership that makes changes and fights corruption. “Only a government that is capable of and committed to undertaking real and tangible reforms will restore investor confidence and unlock international assistance for Lebanon,” he said in a statement.

Speaking about the economic and financial deterioration, Finance Minister Ghazi Wazni told the local Al-Jadeed TV that “stopping the deterioration in the coming period cannot be achieved without foreign help.”

Samir Geagea, head of the Christian Lebanese Forces party that refused to take part in the Cabinet, criticized the new government saying that after three months of protests the state “is behaving as if nothing happened.” He said “most of the ministers are connected to political groups that brought the country to where it is” today.

The Association of Banks in Lebanon said it expects from the new government a “clear financial and economic program that takes into consideration the big challenges that Lebanon is facing.” It added that the banking sector is ready to help in getting Lebanon out of its crisis.

Also on Wednesday, the U.S. dollar was being bought at exchange shops around the country for 2,000 Lebanese pounds after hitting a record of 2,500 pounds to the dollar last week. The official rate remained at 1,507 pounds to the dollar. Panic and anger have gripped the public as the pound, pegged to the dollar for more than two decades, plummeted in value. It fell more than 60% in recent weeks on the black market.