Bassil comes under fire at Davos over trip funding 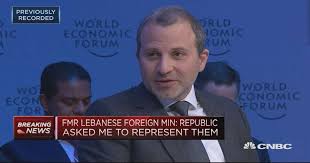 ‘We’re not allowed to have friends like that’: Former Lebanese foreign minister takes heat at Davos for revealing how he funded his trip.

Gebran Bassil, Lebanon’s former foreign minister, said at Davos on Thursday that he didn’t use money from the Lebanese government to fund his trip to the World Economic Forum in the Swiss ski town, but that the trip “was offered to me” — a comment that drew heat from the moderator and a Dutch official.

Bassil’s attendance at the elite conference drew criticism in his home country, which is currently experiencing widespread anti-government protests amid corruption and economic crises. While he’s no longer a foreign minister in the government, he leads the largest political bloc in the country’s parliament.

After Bassil denied using funds from the Lebanese government for the trip to Davos, CNBC moderator Hadley Gamble asked Bassil if he used family money to fund the trip. He responded, “no, this was offered to me.”

Sigrid Kaag, the Dutch foreign trade minister, told Bassil that in her home country, “we’re not allowed to have friends like that.”