Jeff Bezos or MBS? Clash of the titans 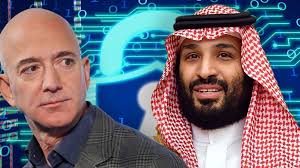 Amazon CEO Jeff Bezos is regarded as the world’s richest man with a net worth of $115 billion ⁠— but the crown prince of Saudi Arabia may have more wealth at his disposal.

There’s no clear-cut number to peg the net worth of MBS, but his family is believed to be the richest on earth, having control of roughly $1.4 trillion, according to International Business Times.

Both men are making headlines after a report from The Guardian that Bezos’ mobile phone was hacked in May 2018 after receiving a WhatsApp message from a personal account belonging to Crown Prince Mohammed bin Salman, also known as MBS. The Guardian suggested that MBS may be behind the National Enquirer obtaining nude photosof Bezos while investigating his relationship with girlfriend Lauren Sanchez.

In addition, The Guardian’s report may revive scrutiny surrounding the murder of Jamal Khashoggi, The Washington Post writer who was killed in October 2018 – just months after the alleged hack against Bezos, the newspaper’s owner.

Bezos and MBS met in Seattle in March 2018 while the crown prince toured the U.S., meeting with many government leaders, including President Trump.

Bezos lost nearly $38 billion in his divorce settlement over the summer but retained his status as the richest person in the world. His ex-wife, MacKenzie Bezos, received nearly 20 million Amazon shares in their divorce settlement, the biggest in history. The former couple has four children.

Bezos and girlfriend Sanchez have been jetting around the globe, enjoying a holiday getaway in St. Barths and a more recent trip to India to announce Bezos’ $1 billion investment in the country.

MBS is believed to have married Princess Sara bint Mashoor bin Abdulaziz Al Saud in the late 2000s, and the couple has children, according to Page Six. However, rumors have swirled of a romantic connection between the crown prince and American actress Lindsay Lohan.

Although his ecommerce behemoth is based in Seattle, Bezos owns land and homes in several other states. In fact, according to Land Report, the world’s richest man also happens to be the country’s 28th-largest landowner.

Washington, D.C., is home to another Bezos mansion. For $23 million, Bezos bought the former Textile Museum about two years ago. His neighbors included Barack and Michelle Obama, as well as Ivanka Trump and Jared Kushner.

(Bezos also has another presence in Washington: He bought The Washington Post in 2013 for $250 million).

Meanwhile, Bin Salman’s investments are a bit more flashy. He has a $500 million superyacht and a $301 million French chateau, according to International Business Times.

The chateau is the most expensive home ever sold after the 2015 purchase, and it includes fountains, a movie theater, wine cellar and moat with a transparent underwater chamber.