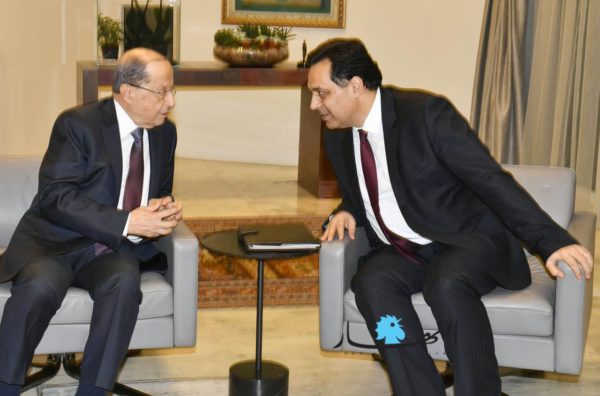 File photo of Caretaker Prime Minister Hassan Diab R and President Michel Aoun Feb 20, 20. Diab refused Aoun’s call for holding a cabinet meeting and insisted that the priority calls for a new cabinet to be formed first and foremost
Share:

BEIRUT: Lebanon faces a ‘catastrophe’, Prime Minister Hassan Diab said Wednesday after his newly unveiled cabinet held its first meeting to tackle the twin challenges of a tenacious protest movement and a nosediving economy.
Hassan Diab, who replaced Saad Hariri as prime minister, vowed to meet the demands from the street but demonstrators were unconvinced and scuffled with police overnight.
The 61-year-old academic, was thrown in at the deep end for his first experience on the political big stage and admitted that the situation he inherited was desperate.
“Today we are in a financial, economic and social dead end,” he said in remarks read by a government official after the new cabinet’s inaugural meeting in Beirut.
“We are facing a catastrophe,” he said.
“Government of last resort,” was the headline on the front page of Al-Akhbar, a daily newspaper close to the powerful Hezbollah movement that gave its blessing to Diab’s designation last month.

Western sanctions on the Iranian-backed organization are stacking up and economists have argued the new government might struggle to secure the aid it so badly needs.
But French President Emmanuel Macron, one of the first leaders to react to the formation of the new government, said he would “do everything, during this deep crisis that they are going through, to help.”
Hezbollah and its allies dominated the talks that produced the new line-up, from which outgoing premier Saad Hariri and some of his allies were absent.
The millionaire was one of the symbols of the kind of hereditary and sectarian-driven politics that protesters who have been in the streets since mid-October want to end.
He and his government resigned less than two weeks into the non-sectarian protests demanding the complete overhaul of the political system and celebrating the emergence of a new national civic identity.

Protesters from across Lebanon’s geographical and confessional divides had demanded a cabinet of independent technocrats as a first step to root out endemic government corruption and incompetence.

Diab is a career academic from the prestigious American University of Beirut and he insisted Tuesday in his first comments that the government just unveiled was a technocratic one.
“This is a government that represents the aspirations of the demonstrators who have been mobilized nationwide for more than three months,” he said.
Yet the horsetrading between traditional political factions during lengthy government formation talks was all too familiar to many Lebanese who met the breakthrough with distrust at best.
“Instead of the corrupt politicians, we got the corrupt politicians’ friends,” said Ahmad Zaid, a 21-year-old student who joined a few hundred protesters in central Beirut after the announcement.
Clusters of demonstrators burned tires and briefly blocked roads to express their displeasure at the new line-up but clashes with riot police were on a smaller scale than weekend violence that left dozens wounded.
Similar rallies took place in Tripoli — a hotbed of the protest movement — in Sidon, Byblos and other cities.

The new cabinet is mostly made up of new faces, many of them academics and former ministry advisers.

It comprises 20 ministers and among its six women is Zeina Akar, Lebanon’s first-ever female defense minister.
To downsize the cabinet, some portfolios were merged, resulting in at times baffling combinations such as a single ministry for culture and agriculture.
Anger at what protesters see as a kleptocratic oligarchy was initially fueled by youth unemployment that stands at more than 30 percent and the abysmal delivery of public services such as water and electricity.
The long-brewing discontent was compounded by fears of a total economic collapse in recent weeks, with a liquidity crunch leading banks to impose crippling capital controls.
Lebanon has one of the world’s highest debt-to-GDP ratios and economists have argued it is hard to see how the near bankrupt country could repay its foreign debt.
“Regarding the economic situation, I repeat that this is one of our priorities,” Diab said Tuesday night.

“We need to be given a little time,” he added.
A looming default on Lebanon’s debt, which has been steadily downgraded deeper into junk status by rating agencies, has sent the dollar soaring on the parallel exchange market.
In a country where many transactions are carried out in dollars and most goods are imported, consumers and businesses alike have been hit hard by the national currency’s free fall.
Every morning, queues of people hoping to withdraw their weekly cap of 100 or 200 dollars form outside banks.