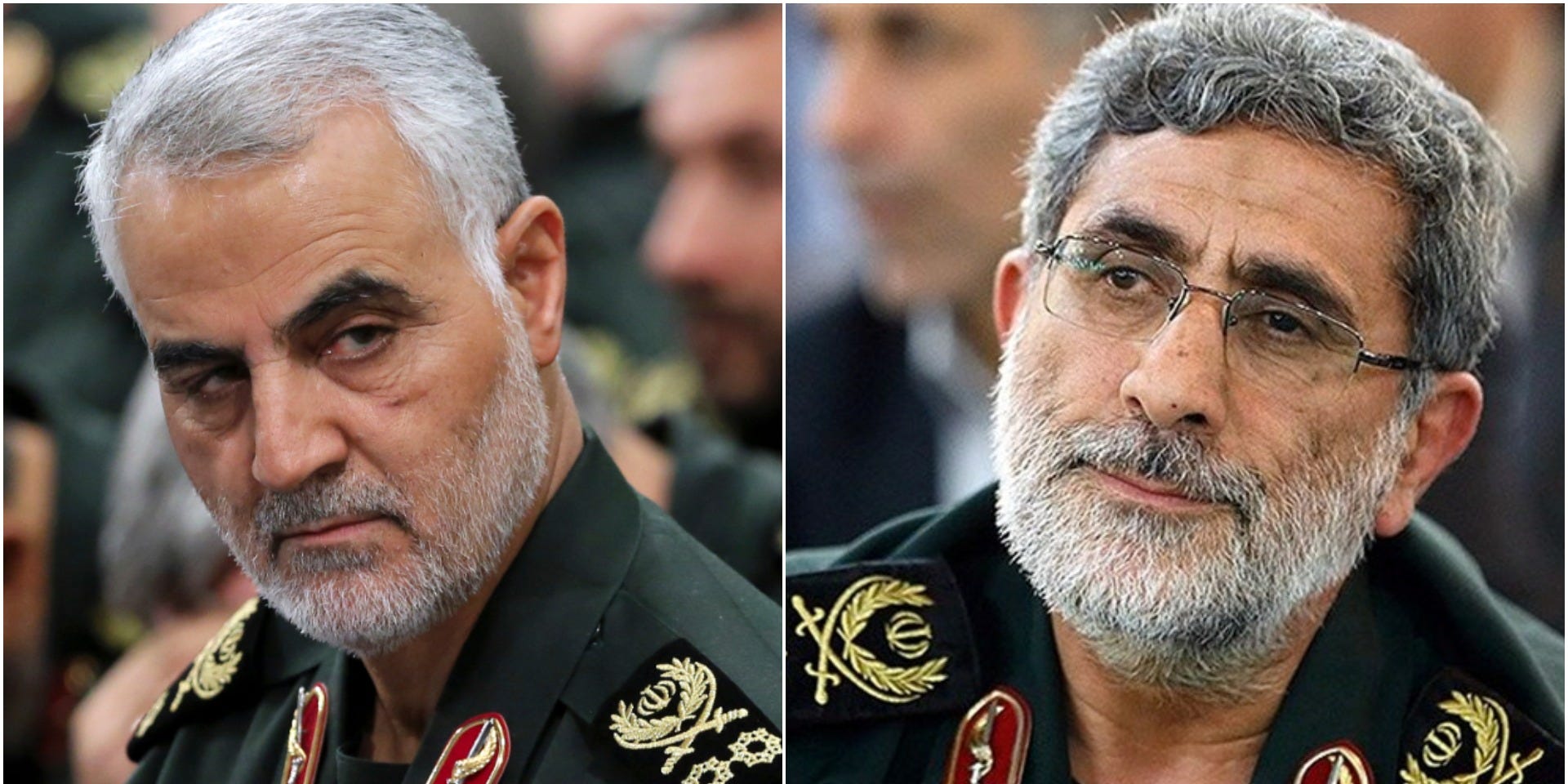 Qassem Soleimani, former head of Iran’s Islamic Revolutionary Guard Corps (IRGC) Quds Force, was feared at home and abroad. He held both symbolic and substantive authority. Iran’s supreme leader dubbed him a “living martyr.” Also, while technically serving under the commander-in-chief of the IRGC, he often eclipsed those at the highest ranks of Iran’s Praetorian Guard. While after Soleimani’s death the supreme leader saidthe Quds Force’s mission “is the same as it was under” his commandership, three areas to watch will be the status of the Quds Force within the IRGC’s top brass, the Ayatollah’s decision-making circle and Iran’s Foreign Ministry’s attempts to assert more control over regional foreign policy.

Soleimani was only the second commander of the Quds Force in the history of the Islamic Republic. His predecessor, Ahmad Vahidi, ascended to the post around 1988, and held it for around a decade. Unlike Soleimani, Vahidi didn’t appear to command the same level of clout in Tehran. Vahidi’s tenure coincided with significant Iranian terror operations, most especially the bombing of the Argentine Israelite Mutual Association in 1994 — but significantly, Argentine intelligence indicatedVahidi wasn’t the operational point man for the attack. Rather, it was then-Intelligence Minister Ali Fallahian, whom Vahidi assisted. This stands in contrast to recent communications intercepts which suggest Soleimani playing the leading role — directly briefing and reporting to the supreme leader in planning for a new operation before the U.S. strike which killed him.

Vahidi’s more junior status is further evident in his post-Quds Force career. He was named deputy defense minister for planning after his service, with the regime burrowing him into the defense ministry without direct access to the supreme leader. Such a fate for Soleimani’s post-Quds Force career would have been unthinkable. There was speculation he harbored presidential ambitions or would even lead Iran after the supreme leader died, at the helm of an “IRGCocracy.”

From Soleimani to Salami?

The regime moved rapidly to find a replacement for Soleimani, elevating his longtime deputy Esmail Ghaani. Indeed, Ghaani served under Soleimani for most of his time commanding the Quds Force. But Ghaani is ascending to the top job at a time when Hossein Salami, the IRGC’s overall commander-in-chief, has been in office for less than a year. In that short time, Salami has presided over an overhaul in the IRGC’s top ranks — with a new deputy commander-in-chief, deputy coordinator, head of the Basij, and director of the Imam Ali Central Security Headquarters all being appointed under his watch. While Ayatollah Khamenei ultimately approves of all these personnel decisions, Salami initiates the recommendations. His rapid reshuffling is evidence of a new commander-in-chief asserting himself — trying to gain control over the IRGC’s sprawling bureaucracy after his predecessor’s decade-plus tenure.

Ghaani will be confronting this new leadership dynamic as he assumes his command. As the Defense Intelligence Agency (DIA) has noted, the IRGC commander-in-chief has traditionally overseen “all IRGC activities, but has less control of the [Quds Force], whose commander has a separate line of communication to Khamenei.” In the aftermath of Soleimani’s death however, Salami may seek to exert more control over the Quds Force, especially given the difference in rank between himself and Ghaani. Salami is a major general, unlike Ghaani, who remains a brigadier general. Soleimani was promoted to a major general in 2011 — a status that enabled him to act as a peer, rather than a subordinate, to the head of the IRGC. This stands in contrast to the commanders of the other IRGC branches like the Ground Force, Aerospace Force, and the Basij, who are all brigadier generals. Thus, Salami could seek to become a more powerful IRGC commander-in-chief than his predecessors, especially when it comes to oversight over the Quds Force.

All the Ayatollah’s men

Soleimani’s departure from the scene may also result in competition within the supreme leader’s decision-making circle for power. Ayatollah Khamenei maintains personal military advisors — Yahya Rahim Safavi and Hossein Dehghan — who are both former IRGC officers. That’s not to mention the existing members of the Supreme National Security Council (SNSC) who also have IRGC pedigrees — its secretary Ali Shamkhani, the chief of staff of the Iranian Armed Forces Mohammad Bagheri, and Hossein Salami himself.

While the commander of the Quds Force isn’t a standing member of the SNSC, Soleimani maintained a special relationship with Ayatollah Khamenei. This is evident in a recent interview Hezbollah’s Secretary-General Hassan Nasrallah gave for the supreme leader’s website, where Nasrallah describes Soleimani hand-delivering to him personal correspondence from Khamenei that he personally dictated to the Quds Force commander.

As the DIA noted last year, Soleimani’s “close relationship with Khamenei allows him to often directly advise and receive orders outside the traditional chain of command.” With Soleimani removed from the scene — particularly given his long tenure, special access, and Ghaani’s lesser rank — this could provide an opening for the supreme leader’s military advisors and members of the SNSC with IRGC credentials to attempt to fill that void.

There has already been evidence of a potential power struggle within the regime, with Shamkhani denying an interview attributed to him in Iranian media, which suggested the Islamic Republic had formulated thirteen revenge scenarios over Soleimani’s death.

In recent days, Iran’s foreign minister Javad Zarif has detailed his close working relationship with Soleimani. Zarif has been recounting how he had weekly breakfasts with Soleimani — in constant coordination. However, such a description masks tension over the foreign ministry’s role in regional foreign policy. Indeed, Iran’s foreign minister resigned last year after he wasn’t included or even notified of a meeting between Iran’s supreme leader and Syrian President Bashar al-Assad. But Soleimani himself was at that meeting.

The drama extends beyond that one gathering. Zarif allowed Hossein-Amir Abdollahian to remain as a deputy foreign minister for Arab affairs to appease the IRGC, with whom he maintained close relations. But the Rouhani administration later ousted him from his position in June 2016, in what some observers thought was an attempt to assert more control over the regional foreign policy file.

The Quds Force has taken the lead on Iran’s foreign policy in Lebanon, Iraq, Syria, and other regional theaters. Indeed, Soleimani handpicked Iran’s current ambassador to Iraq, Iraj Masjedi, who served in the IRGC. However, given Soleimani’s death, the Rouhani administration could make another attempt to wrest more authority from the IRGC over these matters, especially given the danger of escalation and the IRGC taking the blame after the downing of the Ukrainian airliner in Tehran.

In the end, Soleimani was a singular figure in the Islamic Republic.

In recent days, we’ve seen Ghaani appear publicly at the side of Iran’s supreme leader, suggesting a seamless transition, but while Ghaani will fill Soleimani’s shoes in theory, in practice Soleimani’s departure has the potential to scramble the internal dynamics of the regime.