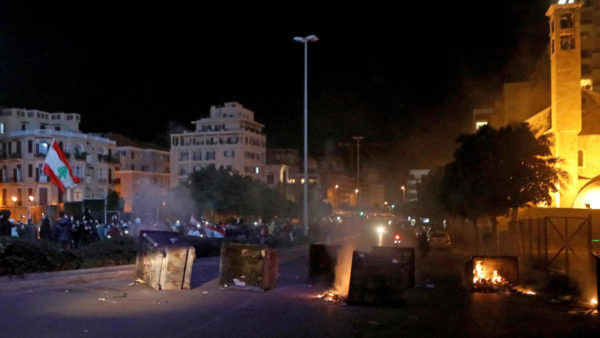 Protesters blocked several main roads across Lebanon on Jan 17 as unprecedented demonstrations against a political elite accused of corruption and incompetence entered their fourth month.
Share:

Protesters blocked several main roads across Lebanon on Friday as unprecedented demonstrations against a political elite accused of corruption and incompetence entered their fourth month.

The protest movement rocking Lebanon since October 17 has resurged this week, over delays in forming a new cabinet to address the country’s growing economic crisis.

No progress seemed to have been made on a final lineup, which protesters demand be made up solely of independent experts and empty of traditional political parties.

“We blocked the road because it’s something they can’t move,” Marwan Karam said.

The protester condemned what he regarded as efforts to form yet another government representing the usual carve-up of power between the traditional parties.

“We don’t want a government of masked political figures,” the 30-year-old told AFP. “Any such government will fall. We won’t give it any chance in the street.”

Forming a new cabinet is often a drawn-out process in Lebanon, where a complex system seeks to maintain balance between the various political parties and a multitude of religious confessions.

Nearby, Carlos Yammine, 32, said he did not want yet another “cake-sharing government”.

“What we have asked for from the start of the movement is a reduced, transitional, emergency government of independents,” he said, leaning against his car.

Elsewhere, demonstrators closed roads including in Lebanon’s second city of Tripoli, though some were later reopened, the National News Agency said.

The protest movement is in part fuelled by the worst economic crisis that Lebanon has witnessed since its 1975-1990 civil war.

The protests this week saw angry demonstrators attack banks following the imposition of sharp curbs on cash withdrawals to stem a liquidity crisis.

Earlier, Lebanon’s security services released most of the 100-plus protesters detained over the previous 48 hours, lawyers said.