Journalists injured in clashes between Lebanese forces and protesters 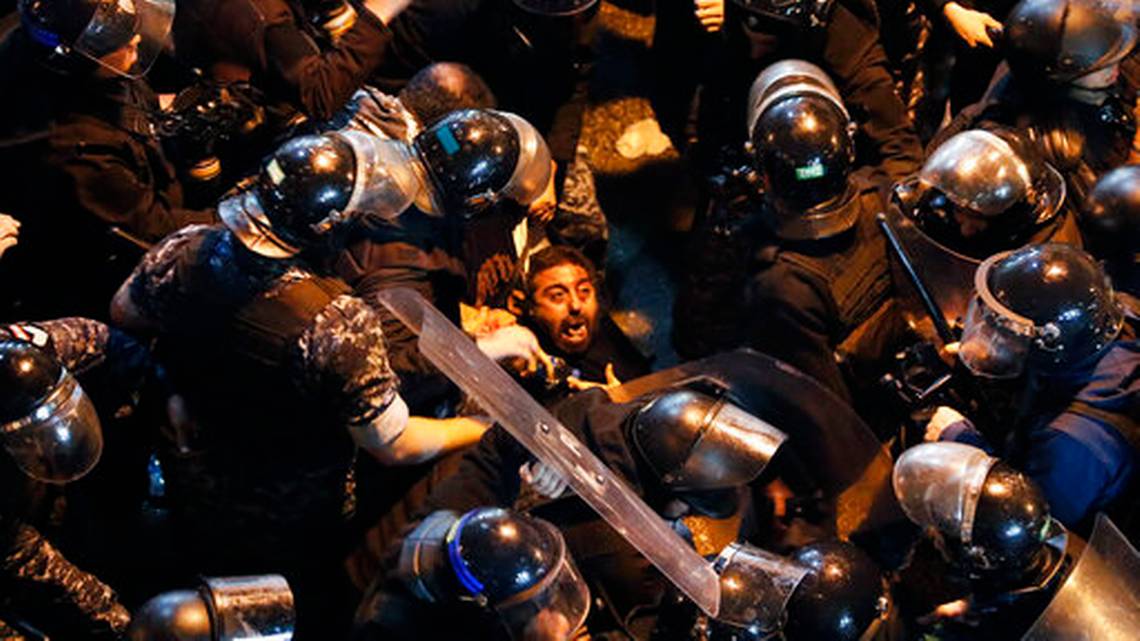 Riot police arrest an anti-government protester who was protesting outside a police headquarters demanding the release of those taken into custody the night before, outside the police headquarters, in Beirut, Lebanon, Wednesday, Jan. 15, 2020. Lebanese security forces arrested 59 people, the police said Wednesday, following clashes overnight outside the central bank as angry protesters vented their fury against the country’s ruling elite and the worsening financial crisis. HUSSEIN MALLA AP PHOTO
Share:

Reuters, along with Lebanese broadcasters Al Jadeed and MTV, said security forces injured cameramen for each of them during the violent unrest.

Multiple journalists were injured by Lebanese security forces Wednesday after continued protests in Beirut turned violent as residents continue to demonstrate against the country’s government.

Reuters, along with Lebanese broadcasters Al Jadeed and MTV, all said security forces injured cameramen working for them. Local Lebanese journalists also said on social media they were being targeted by security forces during the street clashes.

Demonstrations transformed into riots Tuesday after anti-government protesters began vandalizing banks and security forces began arresting a number of people in the city’s Hamra neighborhood. The violent clashes Wednesday erupted after Lebanese security forces attempted to disperse protesters who demanded the release of those arrested the previous night.

Reuters confirmed to NBC News that a cameraman was injured while covering the protests in Beirut, though they did not release his name.

“He was treated in hospital and released,” Reuters said. “The wellbeing of our journalists is of paramount importance, so we are concerned by this news and are seeking answers from the local authorities.”

The country’s internal security forces did not immediately respond to a request for comment from Reuters.

Lucien Bourjeily, 39, an activist and filmmaker who has been present at the protests, said security forces were targeting anyone with a camera.

“Anyone who is just holding a phone and recording what is happening is directly targeted,” Bourjeily said. “I’ve witnessed it myself, it has been going on since the first day of protests.”

The Beirut resident said he believes the protests have been more violent recently because there are rumors a new government might be forming soon.

“It might not happen, but this is what is being talked about. It’s close to being announced,” he said. “I expect it’s in relation to squashing the uprising, to get clean streets for the government to start stealing from us all over again.”

The demonstrations that began to sweep across Lebanon in October died down the past few weeks, but have been renewed in recent days. Lebanese citizens from across sectarian divides came together in a rare display in unity late last year after proposed tax hikes enraged an already struggling populace.

After officials reneged on the proposed tax hikes, protesters focused their anger on what they have characterized as a corrupt government that has mishandled the country’s economy for years.

Banks began limiting access to funds in October, which in part prompted the protesters’ attack on the banks Tuesday night. Former Prime Minister Saad Hariri announced his resignation in October, but the country has yet to agree on an economic plan or a new government.