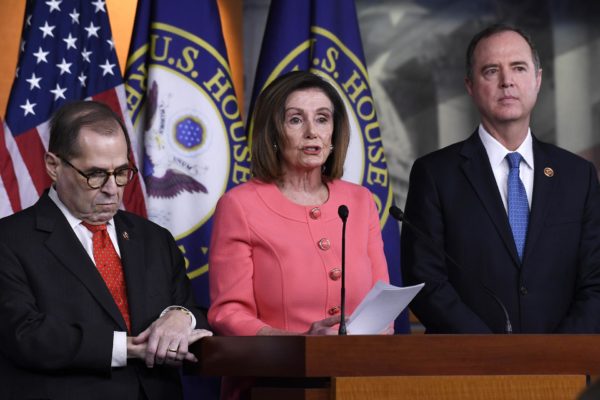 Democrats in the US House of Representatives on Wednesday unveiled a seven-member team to prosecute President Donald Trump. After Nancy Pelosi signed the articles of impeachment, the documents were delivered to the Senate.

House lawmakers on Wednesday voted 228 to 193 to give the Senate, controlled by Trump’s fellow Republicans, the task of putting him on trial on the two articles of impeachment, i.e. 1) abuse of power for asking Ukraine to investigate political rival Joe Biden; and 2) obstruction of Congress for blocking testimony and documents sought by Democratic lawmakers.

US House Speaker Nancy Pelosi selected a team of seven “impeachment managers,” who will act in a prosecutorial role and present the pro-impeachment case before the Senate.

House Intelligence Committee Chairman Adam Schiff, a Trump nemesis who served as a federal prosecutor in Los Angeles for six years, was selected to head the team of managers

Minutes before signing Trump’s articles of impeachment, Pelosi gestured a portrait of George Washington above the House floor, saying, “The president takes an oath that was taken by George Washington. So sad, so tragic. Today we will make history.”

At 5:27 pm EST , Pelosi formally signed the two articles of impeachment against Trump, rotating between a dozen-odd different pens in doing so. Upon signing, she distributed the pens to the impeachment managers and other House members.

While many observers delighted in Pelosi’s gesture, others felt it was inappropriate to the occasion:

Pelosi has handled the optics of impeachment well, right up until that signing ceremony, which was awkward. Handing out pens should have been done in private. This was not some celebratory moment.

Immediately thereafter, the impeachment managers made the history-making walk across the marbled floors of the Capitol Building and delivered the articles to the Senate. This was the first time since Bill Clinton’s impeachment proceedings 22 years ago that this momentous promenade had taken place.

Pelosi launched the impeachment inquiry in September after earlier resisting such a move centered on Trump’s actions to impede a federal investigation that documented Russian interference in the 2016 election to boost his candidacy.

The ball is in the Senate’s court

The trial will focus attention on Trump’s request that Ukraine investigate domestic political rival Joe Biden, just as the 2020 presidential campaign heats up.

A fight over witnesses remains unresolved. Senate Democrats in the Republican-controlled chamber want four current and former Trump administration officials to testify, while many Republicans want a speedy trial without witness testimony. Trump has at times said he wants to hear from witnesses, albeit not the same ones the Democrats want to testify. Democrats need at least four Republicans to join them to reach a majority of 51 senators to approve the subpoenas.

The 100-seat Senate is expected to acquit Trump, keeping him in office, as none of its 53 Republicans has voiced support for removing him, a step that under the U.S. Constitution would require a two-thirds majority.