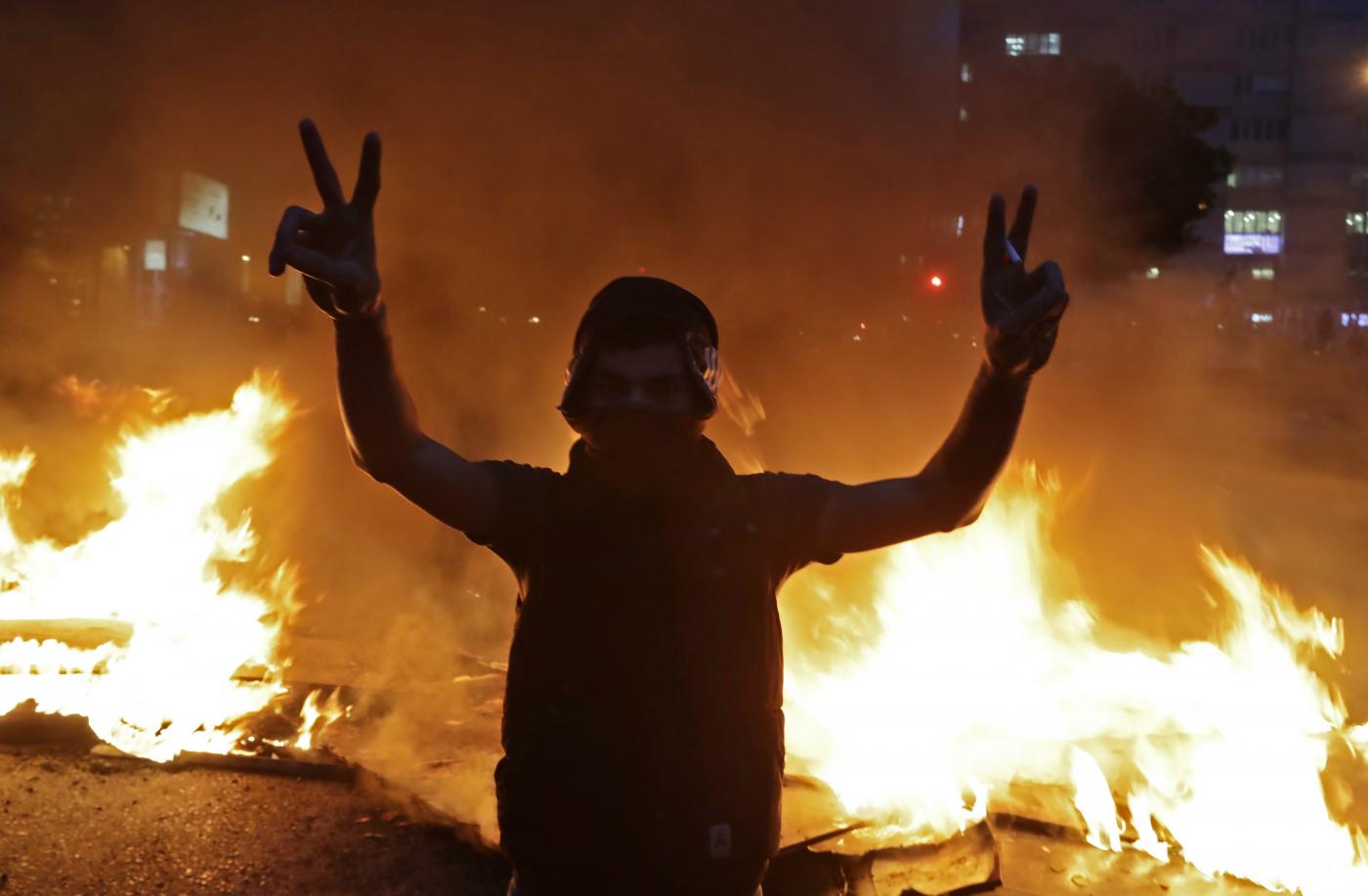 Protesters in crisis-hit Lebanon clashed with security forces in Beirut on Wednesday, a day after demonstrators outraged by restrictions on dollar withdrawals attacked bank branches with metal rods, fire extinguishers and rocks.

Hundreds gathered again outside the central bank on Wednesday evening, moving to a police station where more than 50 people were still detained following clashes between demonstrators and security forces the previous night.

Protesters chanted slogans and demanded the release of their comrades before security forces fired tear gas to disperse them.

The Red Cross said a total of 47 people were injured on Wednesday night, 37 of whom were taken to nearby hospitals. The ten others were treated on the spot.

Lebanon’s internal security forces did not immediately respond to a request for comment from Reuters.

In a statement caretaker interior minister Raya al-Hassan condemned the violence and called on demonstrators to remain peaceful.

Four months into the protest movement against Lebanon’s political class, demonstrators have turned their anger at the banks, most of which have imposed informal capital controls to stave off a liquidity crunch.

That has trapped the savings of ordinary depositors in Lebanon’s worst economic crisis since the 1975-1990 civil war.

After a long day of protests and clashes, security forces released 10 people out of more than 50 who were detained Tuesday night, according to local media and activists.

On Wednesday morning in Hamra, most bank branches were left with smashed windows, destroyed ATMs and graffiti-daubed walls after violent protest the previous night.

Banks opened despite the wreckage, as cleaners scrubbed paint off walls and workers replaced smashed windows.

“There is a lot of anger,” Alia, a passerby, told AFP in front of a damaged branch. “You have to go to the bank twice to withdraw just $200.”

On Wednesday evening, hundreds of demonstrators gathered in front of the central bank, whose governor Riad Salameh they partly blame for the country’s financial crisis.

The state-run National News Agency reported that some tear gas canisters had fallen inside the Russian embassy, near the police station housing the detainees.

Since September, banks have limited the number of dollars customers can withdraw or transfer abroad, in a country where the US currency and the Lebanese pound are used interchangeably.

Although no formal policy is in place, most lenders have limited withdrawals to about $1,000 a month, while others have imposed tighter curbs.

Prompted by a grinding liquidity crisis, the controls are increasingly forcing depositors to deal in the pound.

The central bank has announced it is investigating capital flight, saying it wants to standardise and regulate the ad hoc banking restrictions.

‘Don’t blame the people, blame yourselves’

Compounding the situation, debt-burdened Lebanon has been without a government since Saad Hariri resigned as prime minister on 29 October under pressure from the anti-government protests.

Its under-fire politicians have yet to agree on a new cabinet despite the designation last month of Hassan Diab, a professor and former education minister, to replace Hariri.

Diab has pledged to form a government of independent experts, a key demand of protesters, but said last week that some parties were hindering his attempts.

Authorities on Wednesday condemned the night-time attacks and called for perpetrators to be prosecuted.

Hariri called the rampage “unacceptable,” while parliament speaker Nabih Berri questioned whether the aim was to “destroy the country”.

But in a strongly worded statement, United Nations envoy to Lebanon, Jan Kubis, blamed politicians for the turmoil, accusing them of inaction while watching the economy “collapse”.

“Politicians, don’t blame the people, blame yourselves for this dangerous chaos,” he said.