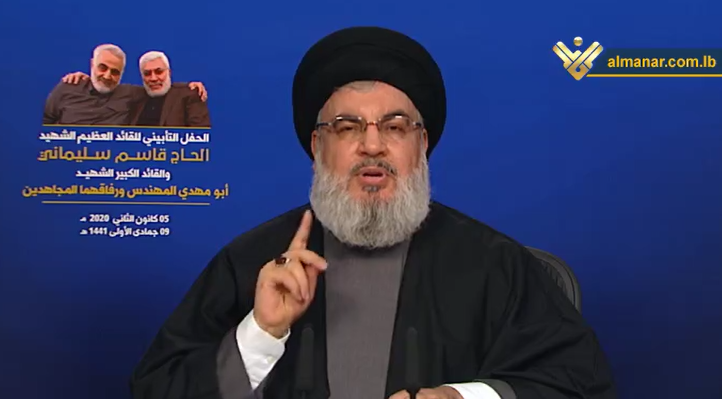 In a televised speech commemorating top Iranian general Qasem Soleimani and Abu Mahdi al-Muhandis, an Iraqi paramilitary leader who was killed with Soleimani in a U.S. drone strike in Baghdad, Hezbollah chief Hassan Nasrallah Sunday warned U.S. officials that they would be mistaken if they thought that “the world has become safer” with the death of Soleimani.

“They are saying that the world has become safer post Soleimani and we tell them that they will realize that they are mistaken through blood. The world after Soleimani’s martyrdom will be different and it will not have a place for tyrants,” Nasrallah stressed .

“The U.S. administration will pay a hefty price and this crime will not go unpunished and it will not be forgotten,” said Nasrallah

During the upcoming days, weeks and months, the Americans must pull out their troops, officers and ships and they must leave the region. There is no choice other than departing horizontally (in coffins) after they arrived vertically,” Nasrallah warned, noting that the U.S. withdrawal from the region is “a matter of time.”

Addressing the issue of the Iranian missile strike on the al Asad air base in Iraq following Soleimani’s killing Nasrallah said the response is “not a single operation but rather a long course that leads to the ouster of American forces from the region.”

“All U.S. bases in the region can be targeted by Iranian missiles and Iran possesses more accurate missiles,” he warned.

No casualties were reported after the Iranian missile strike on the al Asad air base. Americans reportedly knew that Iran was going to attack the base and went hiding inside the bunkers.

Iran has warned Nasrallah that he could be the next target of the United States and advised him to boost security measures according to reports .

After Iran admitted it mistakenly fired a missile at the plane , tens of thousands Iranians headed top the streets demanding the resignation of Iran’s supreme leader Ayatollah Ali Khamenei .

US president Donald Trump has warned Iran against cracking down on protests that broke out after it admitted shooting down an airliner by mistake.

“The government of Iran must allow human rights groups to monitor and report facts from the ground on the ongoing protests by the Iranian people,” Trump wrote.

His message came after Iranian police dispersed students chanting “radical” slogans, according to Fars news agency, during a Saturday gathering in Tehran to honour those killed when the Ukraine International Airlines plane was shot down shortly after taking off from Tehran.