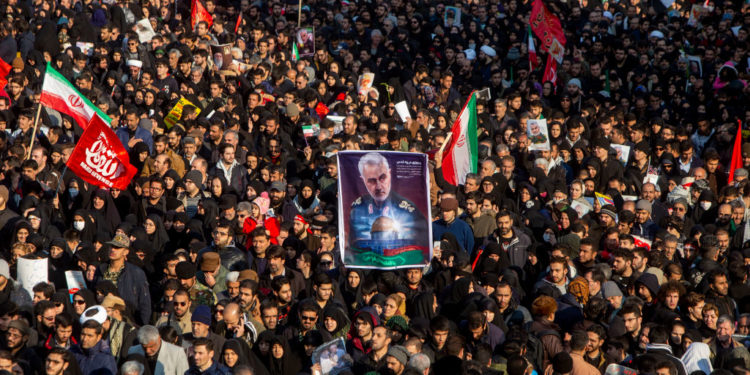 TEHRAN, IRAN – JANUARY 06: Mourners attend a funeral ceremony of Iranian Major General Qassem Soleimani and others who were killed in Iraq by a U.S. drone strike on January 6, 2020 in Tehran, Iran. The processions mark the first time Iran has honored a single man with a multi-city ceremony since the funeral of Islamic Republic founder Ayatollah Ruhollah Khomeini in 1989. Soleimani on Monday will lie in state at Tehran’s famed Musalla mosque as the revolutionary leader did before him. (Photo by Majid Saeedi/Getty Images)
Share:

Iranian state TV said a stampede at the funeral for a top general slain in a U.S. airstrike has killed 56 people and injured 213 others.

Thousands of mourners had surrounded the coffin of Revolutionary Guard Gen. Qassem Soleimani in his hometown of Kerman when the crush occurred.

There was no information as to what had set off the stampede.

Online videos showed people lying lifeless on a road and others shouting and administering CPR.

The deaths came as more angry calls rose from Iran to avenge Soleimani’s death. The U.S. continued to reinforce its own positions in the region and warned of an unspecified threat to shipping from Iran in the region’s waterways, key routes for global energy supplies.

U.S. embassies and consulates from Asia to Africa and Europe issued security alerts for Americans.