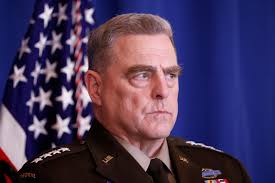 The top US general said Monday a letter suggesting the US would withdraw troops from Iraq was released by mistake and poorly worded, telling reporters “that’s not what’s happening.”

But for over an hour, military officials in Washington and Baghdad were unable to offer a definitive answer about the letter’s veracity or whether it indicated that US troops were, in fact, about to be moved out of Iraq, and the lack of clarity fueled significant confusion about its meaning.

In the end, Chairman of the Joint Chiefs Gen. Mark Milley, was able to provide some clarity, telling reporters that the letter itself was a draft and its release was an “honest mistake.”

The timing of the incident, however, was unfortunate, coming as military officials, along with other members of President Donald Trump’s national security team, continue to face questions about the killing of Iranian commander Qasem Soleimani.

A White House official told CNN Trump was “concerned” about the mistake. The President asked aides about the letter and “wanted it cleaned up,” the official said.

The document in question was an unsigned draft of a memo from the US Command in Baghdad notifying the Iraqi government that some US forces in the country would be repositioned. It also seemed to suggest a removal of American forces from the country, prompting an immediate wave of questions, particularly after US officials in Baghdad said the letter was authentic but could not confirm whether it indicated a troop withdrawal.

At the Pentagon, Milley and Defense Secretary Mark Esper were asked about the letter by reporters. Uproar and consequences mount for Trump after Soleimani killing“We are repositioning forces throughout the region,” Esper said. “That letter is inconsistent of where we are right now.”

But the confusion lingered even after the two men left the Pentagon briefing room and persisted until Milley returned to clarify further. “That letter is a draft. It was a mistake, it was unsigned, it should not have been released … (it was) poorly worded, implies withdrawal, that is not what’s happening,” Milley said.”It’s an honest mistake … it should not have been sent,” he added. Milley went on to say that the copy of the unsigned letter that was leaked to the press was a draft that was shared with the Iraqi military for the purposes of coordination and was never sent as a formal memorandum.

He also said he believes that the draft was leaked by someone that the Iraqi military had provided it to.

Ultimately, Milley clarified the US had not ordered troops out of Iraq but had sent notice that some of its forces would be repositioned, though he offered few details about the nature of the movement. A US official in Baghdad told CNN that the letter was a notification about repositioning of troops from one place to another. The official said that such notifications are standard.

The move comes after Iraq’s Parliament voted to force the government to work toward the removal of US and other foreign troops inside the country, a clear rebuke to Washington over the strike that killed Soleimani.

Trump on Sunday threatened sanctions on Iraq should US troops be expelled from the country.

“If they do ask us to leave, if we don’t do it in a very friendly basis. We will charge them sanctions like they’ve never seen before ever,” Trump said aboard Air Force One, according to a pool report. “It’ll make Iranian sanctions look somewhat tame.”Trump said the costs of maintaining an American troop presence in the country over the past many years should be repaid by Iraq if the country chooses to rescind the agreement allowing them to stay.

“We have a very extraordinarily expensive air base that’s there. It cost billions of dollars to build. Long before my time. We’re not leaving unless they pay us back for it,” Trump said.