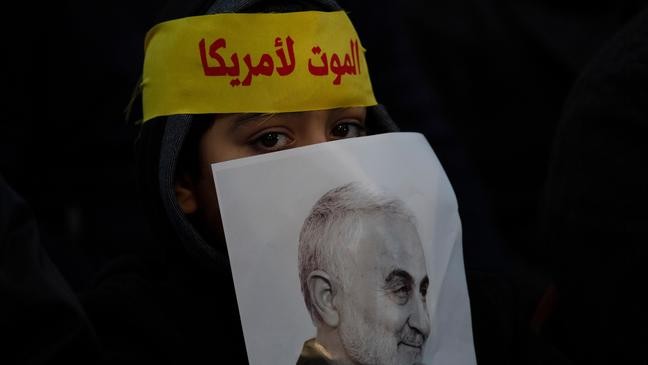 A child peeks from behind a picture of slain Iranian Revolutionary Guard Gen. Qassem Soleimani as supporters of Hezbollah leader Sayyed Hassan Nasrallah gather for his televised speech in a southern suburb of Beirut, Lebanon, Sunday, Jan. 5, 2020 following the U.S. airstrike in Iraq that killed Soleimani. The headband reads, “death to America.” (AP Photo/Maya Alleruzzo)
Share:

BEIRUT: There were mixed responses in Lebanon to a speech by Hezbollah Secretary-General Hassan Nasrallah on Sunday about the assassination of Qassem Soleimani.

A media activist, who declined to be named, said Nasrallah’s speech amounted to “a declaration of war” on the US. “How can the leader of a Lebanese party declare such war?”

Former MP Fares Saeed said: “There is nothing new in Nasrallah’s speech except that it is a high tone, an attempt to call to arms and a statement that Iran’s prestige still exists despite the assassination of Soleimani.”

“The results will not change what is happening,” he said. “There is an American decision to blockade Iran.”

On the impact of the speech on internal matters in Lebanon, he said: “Before and after the assassination, Lebanon is governed by Hezbollah and it is unable to save Lebanon from the crises that it is suffering from, economically and financially.”

But Wafa Sharif, a retired employee, said that she listened to Nasrallah’s speech to find out what would happen and “he assured me that there is no war in Lebanon but (the war is) in Iraq. There are no American bases in Lebanon. And if this is the limit of revenge, then this is reassuring, but I do not know how far they will succeed and what are the repercussions of this step.”

Hania Kinao, a Twitter activist, said: “Go back to Iran; we know that you don’t care about Lebanon.”

In his speech, Nasrallah called the assassination of Soleimani, the commander of Iran’s Quds Force, “a landmark separating two stages in the region. (It is) A new phase not only in the history of Iran or Iraq but for the whole region.”

“Trump’s policy aims to bring Iran to the negotiating table, but his term will end before Iran goes to him, and he will not receive a phone call,” he said.

Nasrallah said that the deputy head of the Popular Mobilization Forces, Abu Mahdi Al-Muhandis, “was with me about two months ago in the southern suburbs of Beirut and asked me to pray for him to be a martyr.”

“The bombing of the convoy of Soleimani and Abu Mahdi Al-Muhandis turned everyone into pieces that are difficult to distinguish,” he said.

“The Iraqis were united in the funeral of Soleimani and Al-Muhandis, and they will not let any American soldier stay in Iraq,” he said. “The resistance forces must cooperate because the region is going to a different stage. The resistance forces must decide how to deal with or act with this event. Iran will not ask for anything. It is not permissible to content ourselves with consolation and memorial, the process is not against Iran, but against all our axis, and we must all work for just retribution.”

He said: “By fair retribution, we do not mean the American people throughout our region. There are American citizens who should not be harmed. Harming them serves Trump’s policy.”

He added: “The martyrdom seekers who drove the Americans out of our area in the past are still there and much more than they were before. And when the American coffins return to the US, Trump and his administration will realize that they lost the region, they will lose the elections, and the response to the killing of Soleimani is to remove the American forces from all of our region and the goal will be achieved.”

Nasrallah’s speech was accompanied by the deployment of the Lebanese army in the southern suburbs of Beirut, on the roads from Baalbek to Dahr Al-Baydar, and from Sidon to Beirut.

Pictures of Soleimani were hung on billboards on the Beirut airport road and in the southern suburbs. Supporters of Hezbollah also raised a picture of Soleimani at the Barakat Al-Naqqar Gate on the border with the occupied Lebanese Shebaa Farms and wrote on it: “With your blood, we will cross it.”

The pictures on the Beirut airport road were criticized by social media activists. Rania Al-Khatib published a picture of the scene and commented: “These pictures are not in Iran but in Lebanon on the airport road.”

Another activist said: “Hanging the pictures on the airport road is totally and completely rejected. Those who love him should hang his picture in their homes; the airport and the airport road are only for the Lebanese. We respect your sorrow, respect our Lebanese identity.”