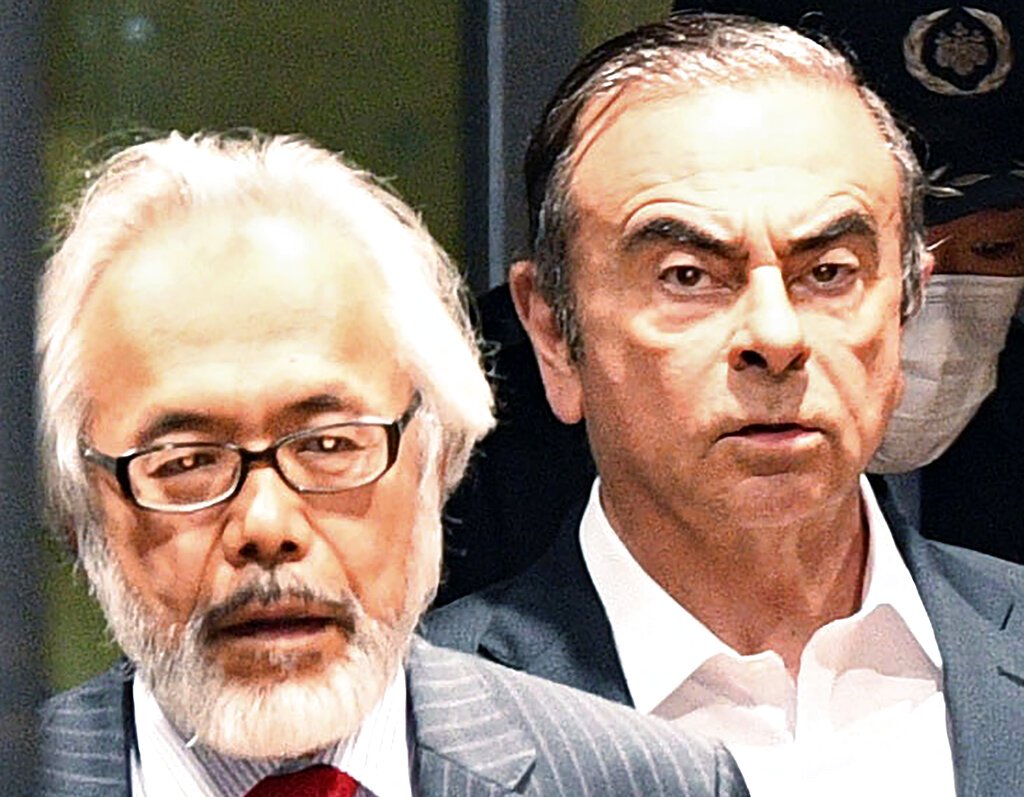 Former Nissan Chairman Carlos Ghosn, right, walks behind his lawyer Takashi Takano as he leaves the Tokyo Detention Center in Tokyo in this file photo. (Kyodo News via AP)
Share:

A lawyer for former Nissan boss Carlos Ghosn said Saturday he felt betrayed by his client’s escape from Japan but still understood his act, claiming it resulted from Japan’s inhumane justice system.

The international tycoon, who faces multiple charges of financial misconduct that he denies, jumped bail and fled to Lebanon in late December to avoid a Japanese trial.

“First, I was filled with a sense of strong anger. I felt betrayed,” Ghosn’s lawyer Takashi Takano wrote in his blog, stating that he had not been informed about the plan in advance.

“But anger was turning to something else as I recalled how he was treated by the country’s justice system,” Takano said.

Ghosn is thought to have taken a private jet from Kansai Airport in western Japan, heading for Istanbul. It is believed he headed from there to Beirut.

“I can easily imagine that if people with wealth, human networks and ability to take action have the same experience (as Ghosn), they would do the same thing or at least consider doing so,” Takano said.

Ghosn’s high-profile arrest in November 2018 and his long detention under severe conditions were widely considered draconian compared with the West.

Suspects in Japan can be detained for weeks or even months before trial, with limited access to their lawyers, and around 99 percent of trials in the country result in a conviction.

Critics including rights groups such as Amnesty International have derided Japan’s system as “hostage justice”, designed to break morale and force confessions from suspects.

When safely in Lebanon, Ghosn pressed this point again, saying he “would no longer be held hostage by a rigged Japanese justice system”.

Another lawyer for Ghosn, Junichiro Hironaka, on Saturday also said that harsh bail conditions—notably the restrictions on contact with his wife Carole—appeared to have motivated the tycoon’s escape.

“He did not know when he can meet his wife … and there was no prospect for a change in his bail conditions,” Hironaka told reporters.

“I guess these things were really tough for him,” the lawyer said.

A Tokyo court banned Ghosn from contacting his wife despite several petitions from his legal team describing the measure as “cruel and a punishment”.

He was later permitted to speak to her via videoconference only.

While Japanese prosecutors have launched an investigation, the circumstances of Ghosn’s Hollywood-like flight from Japan are still unclear.