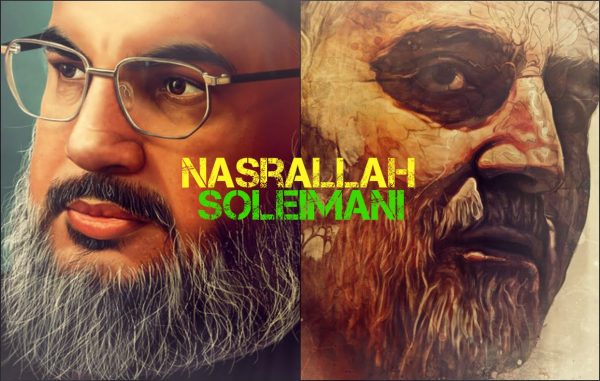 Hezbollah chief hassan Nasrallah ( L) and IRGC-Qods Force commander Qasem Soleimani. Hezbollah was created by the Qods Force in 1982 and continues to operate as one of its divisions
Share:

Nasrallah said the United States would not be able to achieve its goals with this “big crime” and just punishment was the responsibility of all fighters, Al Manar reported.

“Meting out the appropriate punishment to these criminal assassins … will be the responsibility and task of all resistance fighters worldwide,” Hassan Nasrallah said in a statement on Friday .

“We who stayed by his side will follow in his footsteps and strive day and night to accomplish his goals,”he added

“We will carry a flag on all battlefields and all fronts and we will step up the victories of the axis of resistance with the blessing of his pure blood,” Nasrallah added

The “axis of resistance” is a term that refers to an alliance formed by Iran, Syria and Hezbollah to fight against Israel and the Western military presence in the region.

It also has fighters deployed in Syria and Iraq who were operating under Soleimani’s command.