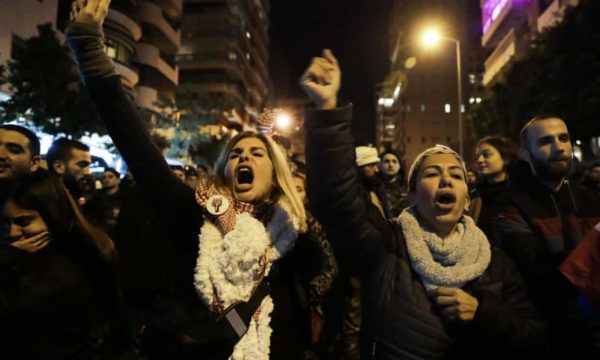 Dozens of protesters gathered outside the Beirut home of Lebanon’s new prime minister on Saturday, calling for Hassan Diab’s resignation less than 10 days after he was appointed.

Lebanon is without a cabinet and in the grips of a deepening economic crisisafter a two-month-old protest movement forced Saad Hariri to stand down as prime minister on October 29.

Anti-government protests continued after Hariri’s resignation, while political parties negotiated for weeks before nominating Diab, a professor and former education minister, to replace him on December 19.

Echoing protester demands, Diab promised to form a government of independent experts within six weeks – in a country where appointing a cabinet can take months.

But protesters on Saturday were unconvinced by his promise.

“We’re here to bring down Hassan Diab. He doesn’t represent us. He’s one of them,” said one young demonstrator, referring to the country’s ruling elite.

Lina, another protester agreed, saying: “It’s the revolution that must name the prime minister, not them.”

Diab, 60, who has a low public profile and styles himself as a technocrat, last week called protester demands legitimate but asked them to give him a chance to form “an exceptional government”.

“We are willing to give him a chance, but let us at least give him a roadmap,” Lina said.

“The names don’t matter to us, we want policy plans, what is his programme?” she asked.

Protesters decry Diab’s participation as a minister in a government deemed corrupt.

The support given to him by powerful Shia Muslim movement Hezbollah also angers many protesters and pro-Hariri Sunni Muslims.

Protesters also gathered in the northern Sunni majority city of Tripoli on Saturday.

The protests and political deadlock have brought Lebanon to its worst economic crisis since the 1975-1990 civil war.

The international community has urged a new cabinet to be formed swiftly to implement economic reforms and unlock international aid.