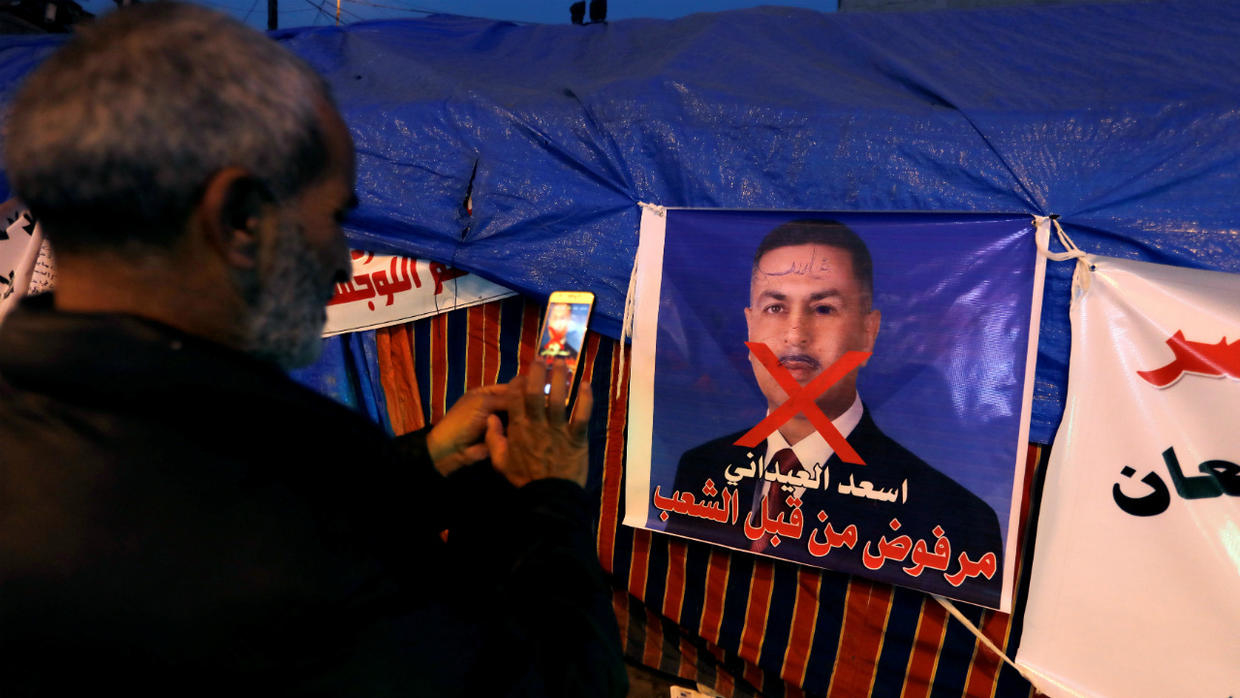 An Iraqi demonstrator takes a photo of a poster of Assaad al-Aidani, the governor of Basra and a candidate for the prime minister’s office during ongoing anti-government protests in Baghdad on December 26, 2019. Khalid al-Mousily/REUTERS
Share:

Iraq’s president said Thursday he was “ready to resign” rather than put forward the candidate of a pro-Iranian coalition for the post of prime minister, deepening the country’s political crisis.ADVERTISING

In a letter to parliament, Saleh said he wished to guarantee the “independence, sovereignty, unity and territorial integrity” of Iraq.

But he cited the constitution, which obliges the president to task the candidate put forward by parliament’s biggest bloc with forming a government.

“With all my respect to (Basra province governor) Mr Assaad al-Aidani, I decline to put him forward” for the post, Saleh wrote.

As that could be seen as violating the constitution, “I place before members of parliament my readiness to resign from the position of president”, Saleh added.

Aidani is considered as the candidate of Iran, which protesters accuse of meddling in Iraqi affairs.

Weeks into a protest movement that has rocked Baghdad and Iraq’s south, leaving hundreds dead, parliament is in deadlock over the selection of a replacement for previous prime minister Adel Abdel Mahdi.

He resigned last month in the face of massive demonstrations over official corruption, economic woes and poor infrastructure despite the country’s massive oil wealth.

The demonstrators oppose the entire political class and have vented their anger against leaders who are negotiating to nominate an establishment insider as the next prime minister.

The constitution however gives the biggest parliamentary bloc the right to name a prime minister, but the legislature is divided over whether the “biggest bloc” refers to the biggest coalition or the winning list in 2018 elections.

Both are unpopular choices with protesters, who also have slammed Aidani for crushing previous demonstrations in Basra province last year.

“We don’t want Assaad the Iranian!” shouted protesters in the southern city of Kut on Thursday.

An opposing bloc, the Saeroon list of populist Shiite cleric Moqtada Sadr—opposed to Iranian influence—also claims the right to name the prime minister as it won the largest number of seats in 2018 parliamentary polls.

The protesters want a technocratic premier who has had no involvement in the political system set up after the US-led invasion that toppled dictator Saddam Hussein in 2003.

“The government is hostage to corrupt parties and sectarian divisions”, said one activist, Sattar Jabbar, 25, in the southern city of Nasiriyah.

Smoke and flames from burning tyres in Nasiriyah, Basra and Diwaniyah blocked major roads and bridges across the Euphrates River all night, AFP correspondents said, before some of these roadblocks were lifted in the morning.

In Nasiriyah, demonstrators set the provincial government building ablaze overnight for a second time since the protests began, and protesters also torched the new headquarters of a pro-Iran militia in Diwaniyah.

Iraq has been rocked by protests since October 1.

After dwindling, the street campaign has gained new vigour in recent days to rally against widespread corruption and a political system seen as beholden to neighbouring Iran.

Government offices and schools remain closed across almost all of Iraq’s south.

Around 460 people have been killed and 25,000 wounded in nearly three months of clashes between protesters and security forces.