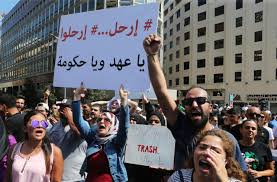 Demonstrators chant slogans and carry banners during a protest against corruption and deteriorating economic conditions, in front of the government palace in Beirut, Lebanon . The banner reads: “Government and ruling class, leave”. REUTERS/Mohamed Azakir
Share:

Lebanon’s hotels are suffering heavy losses because of the absence of tourists during the festive season of Christmas and New Year amid protests.

Most of the hotels in the capital Beirut and other areas shut down some of their floors to reduce expenses, while others decided to cut employees’ wages.

Riad Breich, a front desk manager at Cavalier Hotel in Hamra, told Xinhua that protests prompted a lot of tourists to cancel their reservations during this festive season.

“We had 100 percent reservation rate at the beginning of protests but then people started to cancel out of fear of the unstable situation in the country,” Breich said.

Occupancy at his hotel now stands at 30 percent only despite the lower rates adopted by the hotel’s management to attract customers, he added.

Lebanon has been witnessing over two months of nationwide protests against the ruling political class, which led to the resignation of Prime Minister Saad Hariri in late October.

A new prime minister was appointed recently and is expected to form a new government within a few days to restore confidence in the country and allow businesses to operate normally again.

However, protests are still going on with blocked streets and clashes, conveying a message of instability and chaos to foreign countries.

“The security situation has impacted the sector a lot,” Breich said.

The drop in business forced his hotel’s management to cut salaries of employees by 33 percent to 50 percent, he noted.

For Lebanon’s tourism industry, Christmas and New Year are the busiest periods of the year as people from all over the region come to spend their holidays in Lebanon where they can ski and enjoy a wide variety of activities during this festival.

However, Pierre Ashkar, president of the Syndicate of Hotel Owners in Lebanon, confirmed that this year is different from all previous years.

“We barely have any occupancy,” Ashkar, owner of Monroe Hotel in Beirut and Printania Hotel in Brummana, told Xinhua.

Ashkar said the only visitots to Lebanon are those who have to come for business purposes to solve issues with banks in the country.

“If the situation does not improve, I am expecting the closure of many hotels in Lebanon,” he noted.

The deteriorating situation in Lebanon also prompted Middle East Airlines, the national flag-carrier airline of Lebanon, to reduce the prices of its tickets by 30 percent to encourage people to visit Lebanon after a report by Lebanon’s civil aviation authority that registered a 30-percent drop in the number of passengers in November amid nationwide protests.

Meanwhile, Lebanese Tourism Minister Avedis Guidanian has launched an initiative that asks restaurants, hotels, furnished apartments and car rentals to reduce their prices in a bid to restore the tourism activity in the country.