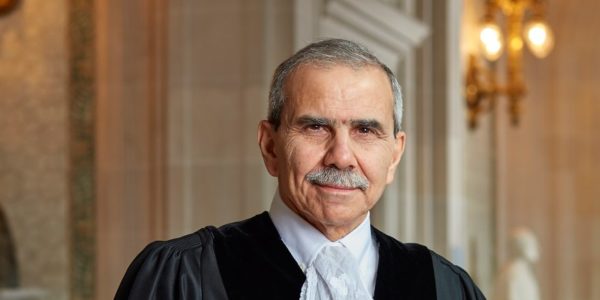 Judge Nawaf Salam said Sunday he was subjected to a “defamation campaign” when his name was proposed as a possible candidate for the premiership during last week’s binding parliamentary consultations to designate a new prime minister.

“Since the beginning of the programmed defamation campaign to which I was subjected, I did not find a reason to respond to any of the allegations with which their architects tried to hurt me because they were not originally based on any evidence, or even the beginning of evidence,” Salam said in a statement carried by the state-run National News Agency.

He added that he was committed to the principle of “reservations” about responding to the campaign given his position as a judge in the International Court of Justice.

“What further confirms the groundless slanders directed against me is that the hundreds of stances I took and the addresses I made in defense of Lebanon, and the issues of the Arabs and Palestine, are fully documented,” he said, noting that “in none of them nor in any of my books and published articles can a single utterance be found that could be considered a base for any of these slanders.”

“What saddens me here is the belief by these individuals that they can continue to underestimate people’s minds, and work on the assumption that it would suffice to repeat the lie in order for it to become a reality,” added Salam.

He concluded by stressing that what’s most important, in the end, is how deeply moved he felt by the trust invested in him by many Lebanese young men and women, “those who seek to have a true democratic state, a state of inclusive citizenship and social justice, a civil state that is based on the rule of law and which upholds the principle of accountability.”

The Amal Movement and Hezbollah reportedly rejected Salam’s nomination for prime minister allegedly due to his close connections with the Americans.

During the consultations held by President Michel Aoun with parliamentary blocs and independent lawmakers at Baabda Palace last Thursday to name a new prime minister, Salam secured the support of 13 MPs against 69 votes to former minister Hassan Diab who was backed by the MPs of the Iranian backed Hezbollah group and its allies, including president Michel Aoun and Speaker Nabih Berri . Among those who voted for Salam were the Progressive Socialist Party’s 9-member parliamentary bloc and the three Kataeb Party MPs.