Is Lebanon becoming a real nation? 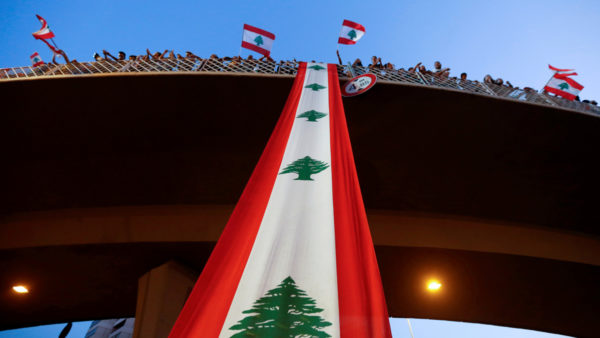 Demonstrators stand on a bridge decorated with a national flag during an anti-government protest along a highway in Jal el-Dib, Lebanon October 21, 2019. REUTERS/Mohamed Azakir
Share:

It is a paradox that at the moment Lebanon is facing its most severe economic and political problems in decades, it may be on the verge of becoming something it has never been: a real nation. Historically, the Lebanese have identified themselves by sect before nationality. Sectarian identity has been the basis of their governmental structure, and sectarian militias fought their sixteen-year civil war. Lebanese protesters now, though, have appeared remarkably united in the demonstrations that began in mid-October, demanding the complete replacement of their political system. They are aspiring to a common, prosperous future with a single national voice. However, their maximalist aims will be difficult to achieve. It is likely the demonstrators will fall short, but it remains to be seen whether the Lebanese can maintain their growing sense of nationhood even if they fail to achieve their full demands. Washington should pay attention because a post-sectarian Lebanon—with a more effective and broadly representative government—is far more likely to be a partner for U.S. regional objectives than the current Lebanese state, which experiences paralysis every time leaders of the three largest sects cannot agree on a way ahead. Notably, one of the three leaders is Hezbollah, which is generally opposed to U.S. regional objectives, receives substantial support from the Iranian government, and, under the current system, can veto any policy.

Since it was carved out of greater Syria in 1943 to serve as an eastern Mediterranean beachhead for French colonialism, Lebanon has been a compact among leading sectarian families rather than a nation. Powerful and corrupt sectarian elites monopolize political power and a disproportionate share of the economic pie, using patronage networks to maintain their sectarian followers. Beirut’s consosciational political system apportioned positions and power based on notional sectarian population numbers. The threat of renewed civil war among the sects—like the 1975-91 conflict that took place with eager encouragement from Lebanon’s neighbors—kept the country’s population from coalescing into a single nation.

To a degree, Lebanon’s current popular demonstrations have mirrored the youth-dominated protest movements sparked by failed policies in other Arab states. The Lebanese suffer from many of the same afflictions as other Arabs: an insufficient voice in their government, lack of transparency in how the government operates, limited economic opportunities, corruption, and inadequate quality of life. Moreover, Lebanon’s infrastructure is crumbling and the Lebanese experience daily electricity cuts, garbage piling up in the streets, sporadic water cuts, and environmental degradation.

However, unlike other Arab countries in which protests tended to focus on one authoritarian ruler, demonstrators in Lebanon have targeted a collection of leaders who have been by turn sectarian elites, combatants, politicians, and kleptocrats. What makes this Lebanese moment remarkable is that the protestors appear to blame sectarianism for their economic plight and are rallying for its end. It is no longer about keeping the peace among a population divided by sectarian identities; it is about realizing the population’s aspirations for its future without deference to sect.

As the Lebanese come together—waving their national flags and playing their national anthem—to demand improved governance and quality of life, they face significant challenges. The present-day demonstrators’ maximalist aim of a complete overhaul of political leadership—“All of them means all of them”—is unlikely to be achieved. Although Prime Minister Saad al-Hariri has resigned, other political leaders will likely resist the demonstrators’ call to step down; in typical Lebanese fashion, even al-Hariri remains a candidate for reappointment as prime minister. Already some leaders are alleging a foreign hand in the demonstrations. Hezbollah leader Hassan Nasrallah maintains that Lebanon is being “targeted” internationally and has suggested that some among the activists associated with foreign interests are looking to plunge the country into civil war. The political class simply has too much to lose and will seek to make only cosmetic changes.

Lebanon’s own 2005 Cedar Revolution could be instructive here. In 2005, popular demonstrations, similar to today’s, were successful in achieving their primary objectives, including the departure of Syrian troops from the country and the election of a new government free from Syrian interference. However, the newly elected political leadership was from the same ruling class and arguably co-opted the Cedar Revolution’s domestic aspirations, protecting elite privilege at the Lebanese people’s expense. Today’s demonstrators are arguing that it was not only the Syrians who constrained Lebanon’s future, but also Lebanon’s sectarian system of governance and the leaders it continues to promote.

Even if the current leaders can be convinced to make significant systemic changes, competent leaders from outside the traditional political class—untainted by the country’s history of graft—will need to be found for the new political system to function as the protesters imagine. Irrespective of whether the next government is sectarian or some new yet-to-be designed non-sectarian system, it will need to overcome the effects of decades-long mismanagement, corruption, and resource constraints.

Unfortunately, if today’s demonstrators’ demands for meaningful change are frustrated, they may not remain united as Lebanese nationals in search of a voice in Lebanon’s future. Longstanding sectarian divisions could quickly re-emerge as failure begets blame. While the Lebanese are wary of another conflict, and a full-fledged civil war remains unlikely, leaders seeking to retain their privileges could see a benefit in impugning other communities’ leaders; some could see limited conflict as a means of redirecting blame or changing the narrative. Lebanese history is replete with assassinations of sectarian leaders, including in the lead-up to the civil war in 1975.

The United States should approach developments in Lebanon with great care. The state has a way of frustrating foreign designs. Neither of the two U.S. interventions in the country—in 1958 and 1982—demonstrated sufficient understanding of Lebanese social and political dynamics; similarly, many Israeli attempts to shape the Lebanese state in Israel’s favor have failed. Moreover, the specter of great power competition over Lebanon is coming into view. Russia’s public warning against foreign intervention in Lebanon is certainly aimed at the United States, and the United States has accused Russia of casting doubt on the authenticity of the demonstrators’ demand to end endemic corruption.

The Lebanese Armed Forces (LAF), important to Lebanon’s defense and critical to its aspiration of a post-sectarian future, was an effective U.S. partner in the fight against the self-proclaimed Islamic State. Because of its non-sectarian construct and its successes against Sunni jihadists, the LAF is viewed favorably by Lebanese across the sectarian spectrum. Continuing or increasing U.S. military assistance to the LAF could be a way of promoting the demonstrators’ objectives by supporting their most treasured national institution, while steering clear of direct involvement. It would also help to buttress the U.S. relationship with Lebanon’s most important national institution in the face of Russia’s mischaracterization of U.S. policy. Moreover, the demonstrators’ drive for a post-sectarian future should eventually focus on dismantling sectarian militias, including Hezbollah’s Shia militia; if the United States does not continue its support for the LAF, this would be less likely as Hezbollah could be the only effective fighting force in the country. Although unlikely to succeed fully, the demonstrators’ drive to eliminate all sectarian considerations from government and policy is necessary for building a flourishing Lebanese nation. It remains to be seen whether this moment can yield at least partial, positive change without embroiling the Lebanese in another sectarian conflict.

Amir Asmar is a Department of Defense analyst and CFR’s national intelligence fellow. Throughout his intelligence career, his primary area of focus has been the Middle East. He held a wide range of analytic, senior analytic, and leadership positions for the Department of the Army, the Defense Intelligence Agency, and the National Intelligence Council. The statements of fact, opinion, or analysis expressed in this blog post are strictly those of the author and do not reflect the official policy or position of the Department of Defense (DoD) or the U.S. government. Review of the material does not imply DoD or U.S. government endorsement of factual accuracy or opinion.