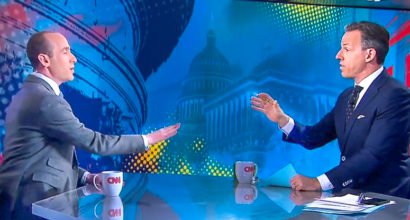 Top Trump aide Stephen Miller (L) gets booted off CNN after testy exchanges with Jake Tapper over the book “Fire and Fury.”
Share:

“As Jewish members of Congress, we are calling on you to immediately relieve White House Senior Advisor Stephen Miller of all government responsibilities and dismiss him from your Administration,” the lawmakers wrote in a letter Friday. “His documented support for white nationalist and virulently anti-immigrant tropes is wholly unacceptable and disqualifying for a government employee.”

The rebuke of Miller comes after the Southern Poverty Law Center (SPLC) published summaries of hundreds of emails Miller sent to Katie McHugh, a former editor at Breitbart News, that included links and references to far-right websites. Many of the emails centered around anti-immigrant messages.

The lawmakers expressed alarm over the messages, noting broader concerns about the rise of anti-Semitism and anti-immigrant sentiment across the country.

“With America experiencing historic levels of anti-Semitism, xenophobia, racism, and white supremacy, there should be no place in our government and on any President’s staff for people propagating such views,” they wrote. “We will not now, or ever, accept intolerance or hate anywhere within our government, and especially not in the White House.

“On behalf of the American taxpayers from our districts contributing to Miller’s salary, we urge you to immediately dismiss Stephen Miller from his duties and the White House,” they concluded.

The letter comes after more than 100 other Democratic members of Congress and several civil rights groups called for Miller’s ouster from the administration. However, the administration has indicated that it will stick by Miller, arguing that any criticism against the Jewish staffer was anti-Semitic.

“I work with Stephen. I know Stephen. He loves this country and hates bigotry in all forms – and it deeply concerns me as to why so many on the left consistently attack Jewish members of this Administration,” deputy White House press secretary Hogan Gidley said in a statement in November after the SPLC released the emails.

Gidley’s statement drew a harsh rebuke from more than two dozen lawmakers, who argued that the response in fact weaponized anti-Semitism.

“Hateful ideology is not just unacceptable, it is un-American, irrespective of the faith, race, or nationality of the individual promoting it,” they wrote. “Weaponizing anti-Semitism is incredibly dangerous – by muddying the waters, we are no longer able to see and fight against the real anti-Semites in our midst.”