Hezbollah’s PM pick: The Lebanese will pay the price 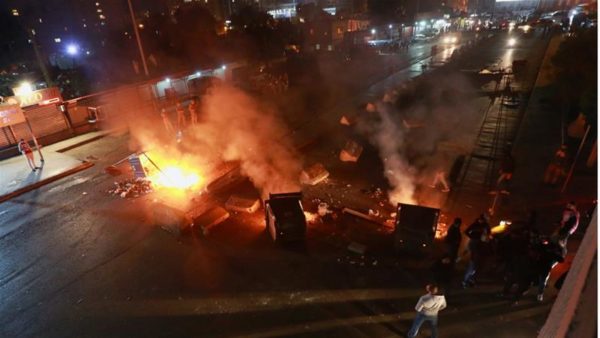 Protesters have blocked roads across crisis-hit Lebanon on Friday to condemn the designation of Hezbollah-backed Hassan Diab as prime minister in a divisive vote that sparked uproar among members of the Sunni community.
Share:

The result of the contest to name the next prime minister, which ended with Dr. Hassan Diab being appointed to form the new government despite only receiving the confidence of a handful of Sunni deputies, while garnering unanimous support from Shiite deputies, enjoying the support of Hezbollah, President Michel Aoun and Foreign Minister Gebran Bassil, was not surprising.

It was no surprise to those who have a realistic analysis of the political map in Lebanon since Aoun’s election as president. This map determined the balance of power in the country and prevented any significant alternations to it. The parliamentary elections that followed, which were held under an electoral law meant to deliver the results that it ended up delivering, solidified the gains made by what is referred to today as the ruling clique.

Prominent political forces, the Future Movement, the Lebanese Forces and the ex-deputy Walid Jumblatt, with everything that they represent nationally and within their sects, tried to live with this balance of power, hoping to improve some of the terms under which the state is managed. However, they kept running into the same stumbling block. To understand just how firm the grip of the ruling clique is on the internal situation, it suffices to remind ourselves of the challenges Saad Hariri faced while trying to form the government that recently resigned. Now, thanks to their regional victories, the clique’s grip on power is even stronger.

When the widespread protest movement began on the 17th of October, the ruling clique felt the ground beneath their feet shaking. That was first and foremost because of demands to end sectarian quotas and second, because of the demands for a war on corruption under the slogan “All of them means all of them.” This was when the clique’s political calculations started to change. Some factions tried to endorse the movement, claiming that the slogans that people were raising were their own and that generalizing the accusation of corruption would be unfair. Aoun and Bassil were the vanguards against this generalization, considering that the Free Patriotic Movement is not involved in corruption and is not responsible for the economic policies that led the country to the state that it has arrived at.

As for the faction of the ruling clique, Hezbollah, and its political and media tools, it resorted to accusing the movement of treachery, accusing participants of being agents of foreign agendas. This accusation was the most effective way for this faction to mobilize its base under sectarian headlines and prevent the fragmentation of its base, which emerged in the early stages of the movement in various Shiite-majority regions.

The problem of the movement’s youth from the beginning was that they were facing these ruling powers that are in control of the political situation and that are afraid any change would turn against its interests and regional commitments. Another problem is that they are facing a rooted sectarian system that is difficult to uproot. This problem manifested when the search for a prime minister to succeed Hariri after he became the only one of the three heads that responded to the street’s demand for the fall of the traditional symbols of the regime. Aoun and the speaker of parliament Nabih Berri maintained their positions.

The president’s team and Hezbollah were not against the return of Hariri to the premiership, but they insisted that he come back under their terms. It was not a love story with Hariri. Still, he was the only one who was capable of providing Sunni cover for Aoun, allowing him to continue his term with the least troubles hoping to prepare Bassil to succeed him. As for Hezbollah, Hariri’s foreign role was useful in marketing Hezbollah’s Lebaneseness and limiting the impact of the international sanctions against it that have been hitting the party in several countries.

Hariri rejected these conditions and insisted on a government not formed of politicians. Hezbollah considered this a plan against it. The search for an alternative to Hariri ran up against the rule that brought Aoun to the presidency, that the most influential in every sect takes the position specified for that sect. Even though there was no disputing Hariri’s Sunni support, some obstacles started to precipitate against the figures that were being considered for the premiership. Propping up a prime minister that does not have this representational power is viewed as a violation of that rule that was agreed on by Hariri and Aoun. It would also be a violation of what is known as the Mithaqiyya [Charter] that stipulates the real representation of sects in the head positions in the state.

Assigning Hassan Diab violated this rule that the presidential agreement was based on. This means that the era of Michel Aoun entered a new phase of internal instability while he was counting on an extended honeymoon with Hariri. It is also entering a period of asymmetric relations with most of the Sunni sect, which brings back memories of the former President Emile Lahoud’s relations with the Sunni sect during his term.

As for the movement, Hariri stepping away from the premiership and another person taking his place without taking into consideration the rule of choosing the strongest in each sect can be considered a violation of that rule. As long as this process does not reach the other strong positions in the state, then it would not be considered a victory for the movement. Otherwise, it would be a discretionary process exploited by one party over another. This is what the political analysis of Hassan Diab reaching the premiership indicates, considering that he is pro-Hezbollah and a former member of the government led by Najib Mikati in 2011, which was formed in the infamous coup against Hariri under President Michel Suleiman.

So, neither did the movement gain anything, nor was the internal political situation stabilized by Diab being assigned. The result is that Lebanon is entering a phase where there is no political immunity while it faces the most challenging economic crisis since its independence. The crisis that required that internal forces work side by side to resolve is now open to political investments by the stronger party that considers alienating Hariri a victory, leaving him remorseful about the presidential agreement that facilitated the current term to materialize and propping up a figure that supports this stronger side internally.

The ongoing dispute concerning this inauguration and the intensity of the political discourse between the president’s team and the Future Movement predicts nothing but the tension in the next phase. It predicts that Hassan Diab will find it very difficult to form his government and that it is the Lebanese who will pay the price.