Roadblocks across Lebanon as anger rises over PM pick 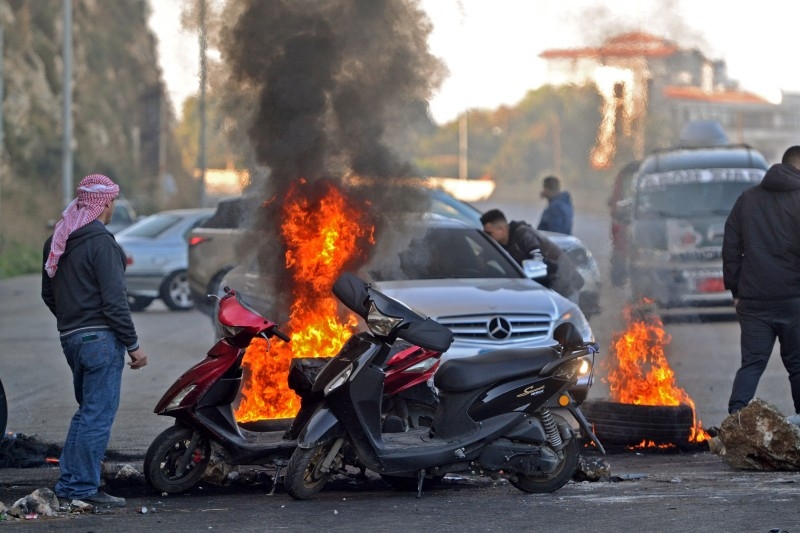 Protesters have blocked roads across crisis-hit Lebanon on Friday to condemn the designation of Hezbollah-backed Hassan Diab as prime minister in a divisive vote that sparked uproar among members of the Sunni community.
Share:

Protesters blocked roads across crisis-hit Lebanon Friday to condemn the designation of Hezbollah-backed Hassan Diab as prime minister in a divisive vote that sparked uproar among members of the Sunni community.

The unrest came ahead of a series of planned meetings between Diab and Sunni political leaders as well as a visit by David Hale, the number three official of the US State Department

Diab, a little-known 60-year-old engineering professor at the American University of Beirut, was designated on Thursday with the endorsement of Shiite group Hezbollah and its allies but without the backing of Lebanon’s main Sunni bloc.

The nomination of the independent former education minister and self-styled ‘technocrat’ ended nearly two months of political wrangling among lawmakers.

In the mainly Sunni northern city of Tripoli, which was already rocked by rallies and roadblocks on Thursday, schools were closed and opponents of Diab again blockaded roads amid calls for a general strike, an AFP correspondent reported.

Roads were also closed in the neighbouring Akkar district and several other parts of northern Lebanon, the state-run National News Agency reported.

The mobilisation, including by supporters of former prime minister Saad Hariri, whom Diab has been nominated to replace, comes ahead a planned meeting between the two men later Friday.

Hariri — who had in recent days been seen as the most likely candidate to head the next government — did not endorse Diab as his successor, stripping him of critical Sunni political cover.

This raised fears that Diab’s nomination as the leading Sunni representative will yield a lopsided government that could fuel sectarian tensions.

Observers say the rift could complicate efforts to secure the release of promised international aid required to pull Lebanon back from the brink of default.

Hariri supporters held protests across Beirut on Thursday night and also gathered in front of Diab’s house, prompting Hariri to call on his supporters to keep of the streets.

“It’s not me who will form the next government, but I am concerned because I fear for the country,” Hariri told MTV television late Thursday.

The Sunni community’s objections to Diab’s nomination fly in the face of the non-sectarian ethos of the two-month-old protest movement which has demanded an end to the communal power-sharing system that its says has entrenched cronyism and incompetence.

The international community which has been pressuring Lebanon to accelerate the formation of a new government, has yet to respond publicly to Diab’s nomination.

His endorsement by Hezbollah is unlikely to endear him to the United States, which regards the Shiite militant group as an Iranian proxy and has pressed other Lebanese leaders to minimise its political influence.

Hale, the US under secretary of state for political affairs, will meet with President Michel Aoun, Hariri and the speaker of parliament Nabih Berri on Friday, a political source said.

“During his visit … he will underscore America’s commitment to its partnership with the state of Lebanon,” a statement from the US embassy said.

“He will encourage Lebanon’s political leaders to commit to the necessary reforms that can lead to a stable, prosperous and secure country.”

Political tensions have been heightened by the looming bankruptcy of the debt-burdened Lebanese state.

The Lebanese pound, officially pegged to the US dollar, has lost around 30 percent of its value on the black market, while companies have been paying half-salaries for the past two months and laying off staff.