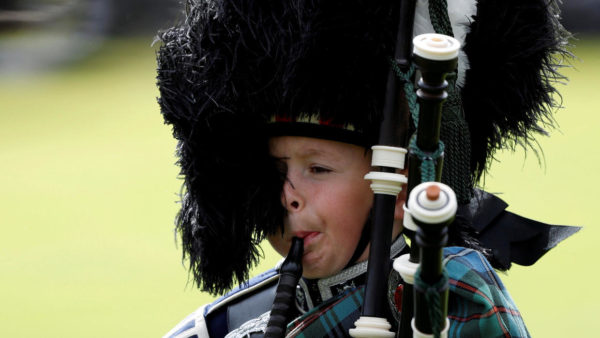 An image of a Highland Gathering in Braemar, Scotland, Britain on September 3, 2016. Russell Cheyne/REUTERS
Share:

Nicola Sturgeon and the Scottish National Party (SNP) will start their campaign next week for a second independence referendum – whether Westminster likes it or not. The SNP will be hoping the economic consequences of Brexit will fuel the movement for independence.

During the build-up to last Thursday’s British general election, Sturgeon’s message was simple: the future of Scotland is on the line.

Sturgeon, Scotland’s first minister,  made her party’s campaign a single-issue one, and the SNP went on to win more than 80 percent of seats in Scotland. This result was the second-highest ever win for the SNP, with the party increasing its number of seats in Parliament to 48, an increase of 13 from the 2017 election.

Speaking in Edinburgh after the results on Friday morning, Sturgeon described the outcome as “an overwhelming endorsement of our campaign, message and vision”.

“It is clear, beyond any doubt, that the kind of future desired by the majority in Scotland is very different to that chosen by much of the rest of the UK. Scotland has rejected Boris Johnson and the Tories, and yet again we have said no to Brexit.”

However, despite this convincing SNP victory, the mood in Scotland was anything but jubilant as the election results were announced on Friday.

“I think there was a large level of shock felt across Scotland on Friday morning. I don’t think people up here expected such a large Conservative majority,” says Dr. Andrew Judge, Deputy Head of Politics and International Relations at the University of Glasgow, speaking with FRANCE 24.

Judge says there was also a certain sense of resignation.

“There’s a history of antipathy to the Conservatives across large parts of Scottish culture and classes. I think people may have dejectedly shrugged when they saw we had another Tory government coming into power.”

Sturgeon will face quite the adversary when she presents her case for Scottish independence.

She confirmed that the Scottish government will publish the detailed democratic case for a transfer of power to enable a referendum to be put beyond legal challenge next week.

“This is not about asking Boris Johnson or any other Westminster politician for permission. The people of Scotland have spoken. It is time now to decide our own future.”

Sturgeon’s announcement about a potential #indyref2 caused searches for ‘How to move to Scotland’ to spike on Google.

In the build-up to the election, Johnson repeatedly ruled out allowing another referendum while he was in office. But Sturgeon has hinted that she might test this refusal through the courts.

When Sturgeon meets the PM next week, is there going to be a stalemate?

“Yes, it looks like it’s going to be a long drawn-out standoff,” says Judge. “The SNP and the pro-independence movement in Scotland are in a bind. It is clear this issue over who should govern Scotland was at the centre of this election. But, at the same time, support for independence had actually remained fairly static since the last referendum at 45 percent.”

The 2014 independence referendum was a closely fought battle, with the ‘no’ side winning 55.3 percent of the vote. Interestingly, there were very few ‘don’t knows’ on this issue.

“The fact that most Scottish people do have a firm opinion and it has not changed over the years makes things difficult for the SNP,” said Judge. “There is not a lot of room for them to grow their support.”

“So, even if Boris Johnson said we could have another referendum, it is not entirely sure that it would pass this time. But Sturgeon did make this campaign all about independence, so perhaps there is a new growing momentum.”

The SNP has also clearly ruled out the possibility of enacting a Catalan-style independence referendum, which occurred when the northern Spanish region held an unauthorised plebiscite in October 2017.

“The SNP has been very clear that they will only pursue legal avenues for a new referendum,” says Judge. “They want Westminster to grant a Section 30 order, which is an agreement that says that any referendum would be respected by both parties, otherwise it would have no constitutional status in the UK. “

However, the SNP has not rejected the idea of a legal test of the proposition of the Scottish Parliament legislating for another vote, without the UK government’s consent.

Whatever happens when Sturgeon presents her demands to Johnson next week in Westminster, it is going to be a slow process. But, according to Judge, Sturgeon has to keep pursuing the referendum even if it is not likely to produce any instant results.

“The only thing that could actually come out of it – though I think it is highly unlikely – is that Boris Johnson could entertain some sort of procedure for beginning a discussion about Scottish independence. But, even then, it wouldn’t be for a number of years at best. And I think the SNP would reject this if it was put to them.”

The question therefore remains of how the SNP will hope to engineer a new referendum that produces a different result to the last one.

Judge believes that the SNP will be counting on the opening Brexit negotiations to produce a significant economic downturn in Scotland. This will help Sturgeon’s party to strengthen its argument for independence.

“Economic fear might be the one thing to help to produce a different referendum result.”