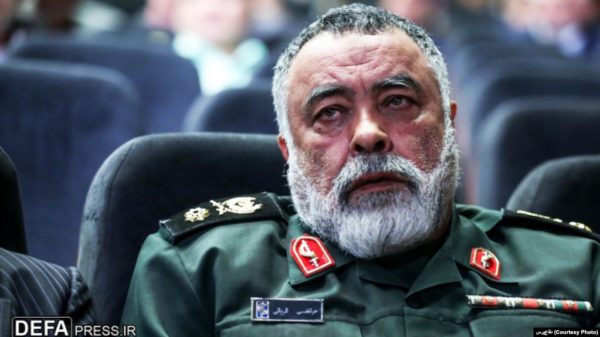 Lebanese officials Tuesday were quick to condemn comments from a senior Iranian Revolutionary Guard official that said “Tel Aviv would be destroyed from Lebanon,” in the event of a future conflict.

“If Israel makes the smallest mistake toward Iran, we will settle Tel Aviv from the soil of Lebanon,” Murteza Ghorbani was quoted as saying by Mizan Online News Agency.

Ghorbani is a a top adviser to commander of the Iranian Revolutionary Guard Corps.

Lebanon’s caretaker Information Minister Jamal Jarrah Tuesday said the Iranian official’s comments were an attack on the “sovereignty of Lebanon as a people and as a state.”

Jarrah tweeted: “Iran tries to defend itself as it wishes; however, Lebanon is a not a [messenger] for the IRGC or an arena for any foreign country.”

Caretaker Defense Minister Elias Bou Saab, a member of the Free Patriotic Movement, which is aligned with Hezbollah, also spoke out against Ghorbani’s comments.

Bou Saab said that if the statement attributed to the “adviser to the head of the Iranian Revolutionary Guard was true, it is regrettable and unacceptable and infringes on the sovereignty of Lebanon.”

Bou Saab, said via Twitter that Iran, “which has a friendly relationship” with Lebanon, should not “undermine in any way” the Lebanon’s independence and sovereignty.

Farid Al-Bustani, a member of the parliamentary bloc affiliated with the Free Patriotic Movement, said: “If this is true, it is a violation of the sovereignty of Lebanon on the one hand and the status and immunity of the resistance on the other.”

The president of the Independence Movement, Michel Moawad, criticized Ghorbani’s statement, while member of Parliament Nadim Gemayel demanded a “clear position on these words from Hezbollah Secretary-General Hassan Nasrallah, President of the Republic Michel Aoun and from (Prime Minister) Saad Hariri.”