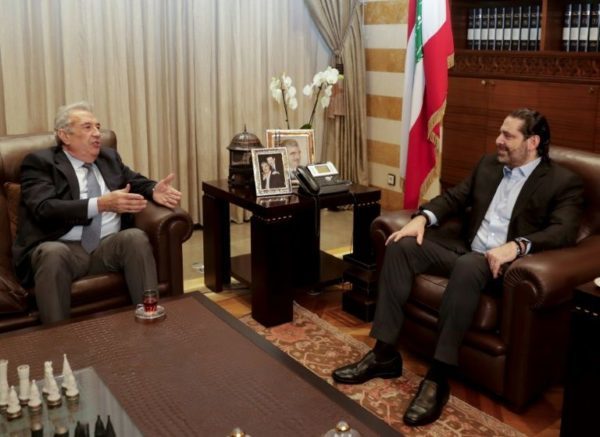 Sunni Muslim leaders in protest-wracked Lebanon have thrown their support behind ex-premier Saad Hariri to return to his post a month after he stepped down, a sidelined candidate said Sunday.

Businessman Samir Khatib had been put forward as a likely contender to succeed Hariri, but he said a visit to the country’s highest Sunni Muslim authority had indicated otherwise.

Grand Mufti Sheikh Abdellatif Deryan informed Khatib that “a consensus had been reached to name Saad Hariri as prime minister to form the next government”, the 72-year-old businessman said.

Khatib then met Hariri, who has stayed on in the role of caretaker premier and has supported him in his bid, to inform him of his withdrawal from the race, he said in televised comments.

Lebanon has been gripped by unprecedented cross-sectarian protests since October 17, denouncing perceived official mismanagement and corruption.

Hariri stepped down less than two weeks into the nationwide movement, but a deeply divided political class has since failed to reach an agreement on a new premier.

The names of several potential candidates were circulated in the media, but protesters rejected Khatib as being too close to traditional circles of power.

The president has called for mandatory parliamentary consultations starting on Monday to decide on a new premier.

On Sunday evening, dozens of protesters gathered in central Beirut near a road leading to parliament closed of by security forces.

Cabinet formation can drag on for months in the multi-confessional country, with Hariri taking almost nine months to reach an agreement with all political sides for the last one.

According to a complex political system that seeks to maintain a fragile balance between religious communities, Lebanon’s prime minister is always a Sunni Muslim.

Hariri has been prime minister on and off since 2009, stepping down and returning on two previous occasions.

The 49-year-old follows in the footsteps of his father, late premier Rafik Hariri, and is considered the traditional political leader of the country’s Sunni Muslim community.

Lebanon desperately needs a new government to rebuild trust with both protesters demanding a cabinet of independent experts, and international donors able to provide financial aid.

The Mediterranean country’s economy is in freefall, even as the Lebanese struggle with a dollar liquidity crisis.

The World Bank has projected negative growth of 0.2 percent in Lebanon for 2019, but now warns the recession could be even worse.

Around a third of Lebanese live in poverty, and that figure could soon rise to half, it says.