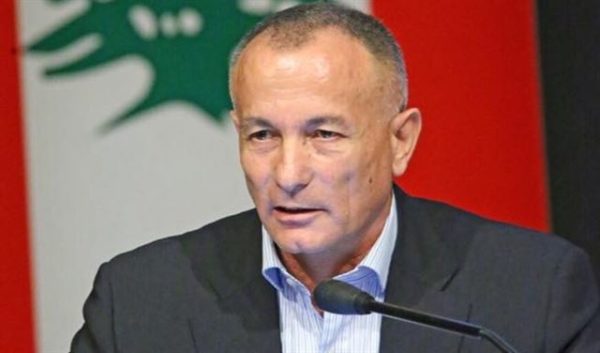 Lawmaker Chamel Roukoz , a member of Lebanese President Michel Aoun’s parliamentary bloc said he will not nominate anyone for the position of prime minister. Roukoz, a retired army general is also the son-in-law of president Aoun
Share:

BEIRUT: Three lawmakers and members of Lebanese President Michel Aoun’s parliamentary bloc will not abide by its decision to name a new prime minister on Monday.

Meanwhile, activists in the civil movement are holding meetings to announce a general strike and the blocking of roads on Monday in protest over reports that the new government will not include technocrats.

Samir Al-Khatib is considered the most favored candidate after preliminary consultations conducted by Aoun with his allies prior to setting the date for binding parliamentary consultations to nominate a Sunni prime minister, as required by the Lebanese constitution.

Prime Minister Saad Hariri submitted the resignation of his government on Oct. 29 as a result of ongoing mass protests against corruption. He later said he would not agree to head a new government unless it consisted of technocrats.

Lawmaker Neemat Frem urged citizens to provide him with the name of their favorite candidate to head the new government, “for you are the primary source of authority, and it is my duty to convey your voice in the binding parliamentary consultations.”

Lawmaker Chamel Roukoz said he will not nominate anyone for the position of prime minister.

Lawmaker Michel Daher declared his intention to boycott the parliamentary consultations if Al-Khatib is the only candidate.

Aoun assured a delegation of British financial and investment institutions, and US bank Morgan Stanley, that binding parliamentary consultations will take place on Monday to form a new government, which will help Lebanon’s friends launch agreed-to development projects.

“The new government’s priority will be to address the economic and financial conditions as soon as it is formed,” he said.

On Friday, Hariri sent letters to the leaders of a number of countries with good relations with Lebanon.

He asked them to help Lebanon secure credit to import goods from these countries, in order to ensure food security and availability of raw materials for production in various sectors.

His media office said the move “is part of his efforts to address the shortage of financial liquidity, and to secure procuring the basic import requirements for citizens.”

Among the leaders Hariri wrote to are Saudi Arabia’s King Salman; the presidents of France, Russia, Egypt and Turkey; the prime ministers of China and Italy; and the US secretary of state.

On Dec. 11, Paris is due to host a meeting of the International Support Group for Lebanon. Reuters quoted a European source as saying: “France has already sent invitations to attend the group meeting.”

Protesters continued their sit-ins in front of government institutions in Nabatieh, Zahle and Saida.

In Tripoli, protesters blocked the city’s main roads, which were eventually reopened by the army.

In Akkar, protesters raided public institutions and called for an “independent government that fights corruption, restores looted funds, and rescues the economic situation and living conditions from total collapse.”

Lebanese designer Robert Abi Nader canceled a fashion show that was due to be organized in Downtown Beirut, where protesters are gathering.

Abi Nader said he intended through his show to express support for the protests by designing a special outfit called “the bride of the revolution,” and revenues were to be dedicated to families in need.